At precisely 1:00 Eastern time on the afternoon of April 11th, 31,000 workers at 253 Stop and Shop grocery stores throughout Connecticut, Rhode Island and Massachusetts walked off their jobs. The strike came after several months of failed negotiations in which Stop and Shop refused to retract an onerous set of demands for the elimination of premium pay for Sunday work, major cuts to pensions and dramatic increases in the amount workers would have to pay for healthcare. 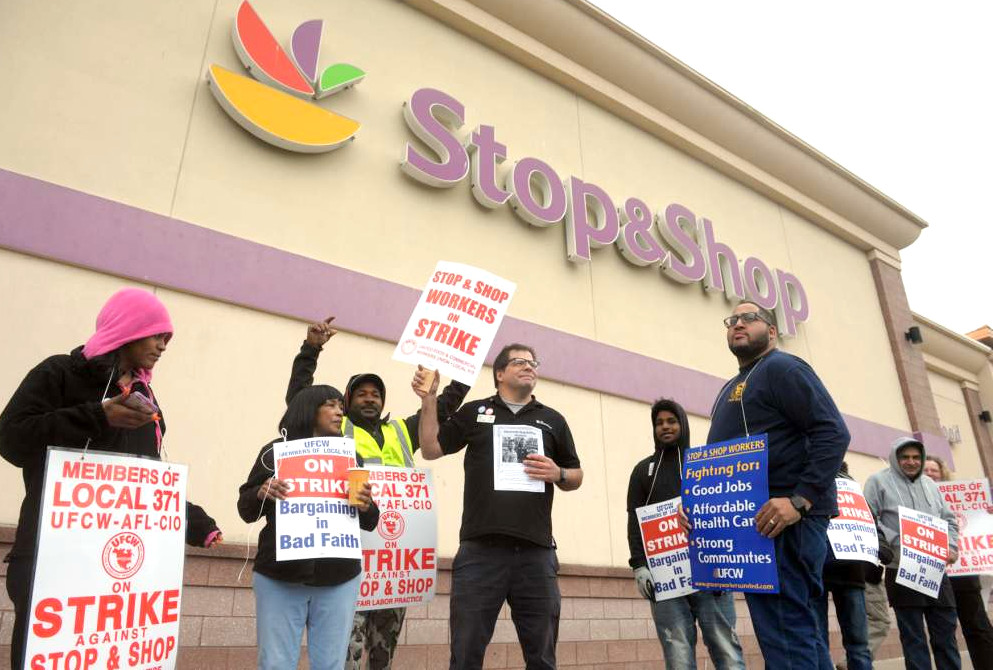 The strikers are members of the United Food and Commercial Workers (UFCW). Truck drivers, both union and non-union, have honored the picket lines by refusing to make their deliveries, according to strikers at four picket lines in Bridgeport and Fairfield, Connecticut. The workers at those stores also report that no union members have crossed the picket line. Most stores are open as supervisors and a small number of replacement workers have been stocking shelves and working cash registers but business has taken a big hit.

Public support has been high and sympathetic supervisors have told strikers that the take for one 16-hour day at a store in Fairfield was a meager $2,000, a fraction of a normal day’s business. Some stores have cut their hours because business has been so bad. Officials and members of other unions have joined with strikers for rallies at stores in a number of locations, including Bridgeport and Fairfield. Virtually every elected official in the Bridgeport area as well as both U.S. Senators are Democrats and many have visited a picket line and/or expressed their support for the strike, as have several Republicans from other parts of the state. An announcement was made at a picket line yesterday that community sympathizers and merchants have established a food bank where strikers can get free food.

From conversations with dozens of strikers, morale of union members is high eight days in. Worker after worker expressed special gratitude for the overwhelming public support they’ve received. Shoppers who know many of the strikers by name from years of shopping have joined the picket lines and many have brought coffee, doughnuts, pizzas and other food and beverages to the strikers. Media coverage on local television stations and in the Hearst dailies that dominate the newspaper market in Connecticut has been mostly positive.

Amidst the strikers’ enthusiasm, however, is an undercurrent of fear and resentment. There has been no strike at Stop and Shop for 30 years, and that one was of very short duration, so the vast majority of the chain’s workers are confronting the unbridled greed of their employers in such an open way for the first time. The Stop and Shop stores are among many owned by the Dutch conglomerate Ahold which reported $2-billion in profits in 2018.

Despite such profits and despite the fact that Stop and Shop is far and away the dominant grocery store chain in New England (and which also owns stores in New York and New Jersey that are covered by a different contract and thus not on strike), Ahold is demanding significant givebacks. The cuts in pensions and health coverage particularly rankle the strikers; the company’s current demands, for example, include a fourfold increase in the amount workers will have to pay in co-payments for doctor’s visits.

Picketers expressed a mix of astonishment and anger that a massive company that is doing so well would utterly refuse to share any portion of that wealth and instead demand significant givebacks. New hires, all of whom are part-time, start at $10.10 an hour. Stop and Shop has consciously cut the number of full-time positions, and stipulations that the company forced through in previous contracts make accepting a full-time promotion far less attractive than it could be.

“It takes years before you can even think about getting a full-time position,” said Rafael Quiles at the picket line outside one of the stores in Fairfield. “And if you do go full-time, the company has the right to transfer you to any store in the state that it wants to.” He and others said the company does precisely that in order to discourage others from seeking full-time.

“Many people who take full-time jobs go back to part-time a short while later because they don’t want to be moved to a store far away,” added Gin Palladino, a ten-year veteran who lives just a few blocks from the store where she works. “I’d rather work part-time here and get another part-time job close to home than have to travel a long distance to work full-time.”

Kizzy Lewis is a full-timer who has worked in 12 stores in her 25 years at Stop and Shop. “They had me working as far away as Stamford and at other stores all over Fairfield County,” she said. “After all these years, I hope this is my last one.” Lewis also ridiculed the gas allotment the company pays for those it transfers, pointing out that the worker is responsible for the first 15 miles both to and from work.

For many workers, hourly wages that are equal to or just a little above the federal minimum do not go far. Consider that Fairfield County is one of the wealthiest and most expensive areas in the country where the contrast between the Super Rich who live in places like New Canaan and Greenwich and workers at Stop and Shop couldn’t be starker. A number of strikers live in Bridgeport, the least expensive housing market in the area, but even rents in Bridgeport can be as high as $1,000 a month for a one-bedroom apartment. For people making $10.10 per hour, that is out of reach. People spoke of co-workers well into their 20s who live with their parents or other family members because they cannot afford to live on their own.

As with so many workers in the United States today, some of the strikers have more than one job. One man on the picket line said he averages 65 hours a week between his two jobs and is still barely making ends meet. A woman striker said she’s negotiating with her boss at her other job about getting more hours if the strike lasts.

It’s important that the Stop and Shop strikers win, just as it was important that the tens of thousands of teachers around the country won their strikes in the last year. It’s also important, though, that workers, their supporters and allies and union staffers who are so inclined take a long, harsh look at the state of things. The Stop and Shop workers’ strike is essentially defensive; they are resisting the company’s attempts at more takebacks and the union, according to workers, is putting forward few demands of their own. So no noteworthy wage increases or other improvements await them even if they score a complete victory. In the short term at minimum, their lives will continue to get harder.

Winning and Seeds of Greater Possibilities

There are, however, seeds of greater possibilities and future victories in the strength and togetherness the workers are experiencing in their strike. By virtually every account including those by sources generally hostile to unions, workers and strikes, the Stop and Shop strike has been an overwhelming success. The company is losing money in a big way, for one, and the hard line it has drawn has raised the awareness of many strikers: about their relationship to their employers, about the power of collective action, about the power of an entire workforce withdrawing its labour, about how perilous life in the 21st century United States has become for the working class. 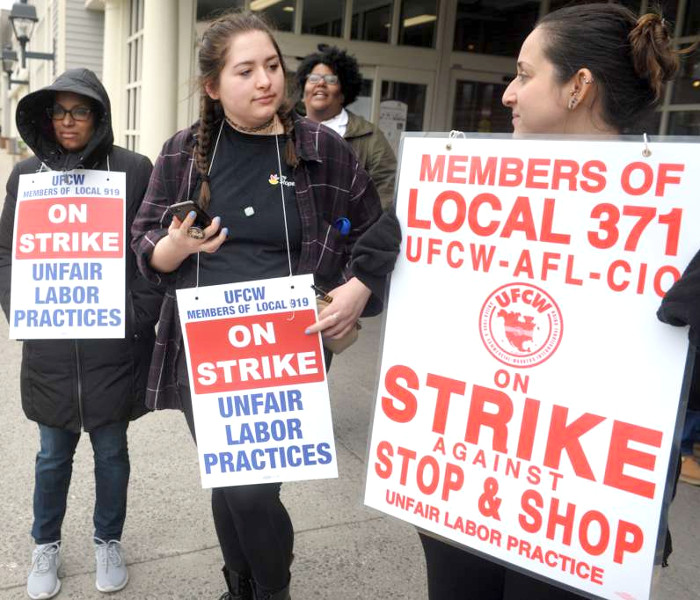 Speaking about the experience of the strike thus far, one worker said the following:

“Most of us like our jobs because we have so many regular customers who make it feel like a community and they far outnumber the customers who make our lives difficult. What really makes it hard to like your job is not the customers who give you a bad time but knowing that you’re getting a bad deal from the company. The pay is too low, the benefits aren’t enough, working on weekends is mandatory, all that stuff. And then to see that they want to cut our pensions even further, make us pay more if we go to the doctor, cut Sunday premium pay and give us nothing in return for all that … it’s too much. All these people you see on this picket line and all the other picket lines at all the other Stop and Shop stores, none of them is ever going to forget this.”

Asked if he meant the togetherness of the strikers or the conduct of the company, he said simply, “Both.”

Perhaps one big lesson that can reverberate far and wide beyond Stop and Shop is the power of the strike. After years and years where the number of strikes dwindled to a pitifully small number, accompanied by a barrage of negativity from media and political elites, workers are beginning to see that it is one of the most effective ways to fight back. That’s true of teachers, nurses and other healthcare workers, electrical workers at Wabtec in Erie, grocery store workers throughout southern New England. Equally large challenges will be to bring that fighting spirit and solidarity into the workplace and the union hall as well as for workers from a variety of workplaces both union and non-union to build organizations of mutual support where they can also strategize about how to build a different kind of society. •

“Today is a powerful victory for the 31,000 hardworking men and women of Stop & Shop who courageously stood up to fight for what all New Englanders want – good jobs, affordable healthcare, a better wage, and to be treated right by the company they made a success.”

Bridgeport native Andy Piascik is a long-time activist and award-winning author whose most recent book is the novel In Motion.