In Memory of Dave Vasey who knew first-hand about official callousness toward life in the small town of Walkerton where people died needlessly of water contamination. Dave dedicated his too short life to fighting against climate injustice, militarization, and the austerity state.

I read the Canadian news today: “Pipeline expansion should be approved: regulator.” 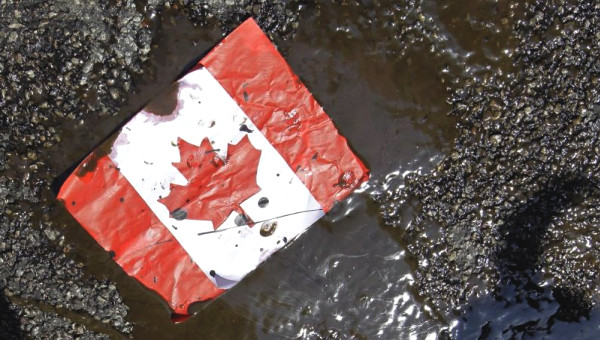 Regulators ignorantly, negligently, criminally, and in contempt of life, yet again gave the go-ahead to money over incontestable science. Liberal democratic Canada is in league with Brazil’s military dictatorship and the Lima Group in overthrowing the Maduro government in Venezuela, and in deforesting the “lungs of the earth.” Theirs is a triple crime, of thrice proliferating greenhouse gas emissions at this time of the Earth’s sixth great extinction event. Venezuela is all about oil. The pipelines transport high emitting diluted bitumen from the tar sands, and Jair Bolsonaro aims to expand biofuel production (and criminalize the Landless Peasant Movement). These mega-projects involve deforestation of the boreal forest and the tropical Amazon rainforest, destroying the Earth’s major terrestrial carbon sink and amplifying the concentration of greenhouse gases in the atmosphere.

Are these arbiters of life on Earth, Justin Trudeau, Jair Bolsonaro et al, subject to the Nuremberg laws on individual responsibility, with the implication that decision-makers need to be fully informed and not just claim to follow orders? The legal underpinnings of the doctrine of informed consent upholds a standard of knowledge. It came out of the Tuskegee experiments in which Black men were not informed that they were subjects of a medical experiment.

The legal norm of knowledge was based on breast cancer cases in which it was found that women at all levels of education could be fully informed about the state of knowledge about breast cancer and its treatments. Unfortunately, in the sociopathic mill of American legality, “informed consent” in medical practice and in the UN Declaration on the Rights of Indigenous People turned into its exact opposite – a perfunctory formality, a checklist document that protects power from countersuits. Yet the critical importance of knowing is central. The “ostrich defense,” burying one’s head in the sand, and evasion through plausible deniability, are fundamentally dishonest.

The decisions around pipelines, the tar sands, and deforestation of the boreal and tropical forests, reflect extreme disregard of facts about the state of the climate. Alarmingly, not-knowing, for multiple reasons, characterizes all levels of governmental and nongovernmental bodies. Willful disregard for the full facts also applies to the new standard set by the Intergovernmental Panel on Climate Change (IPCC) and the Congress of Parties (COP) of the United Nations Framework Convention on Climate Change (UNFCCC). The 12-year time line aiming to cap temperature rise at 1.5°C ignores the very dynamics of the climate system and the hegemonic principles espoused in the political/economic system. Their climate predictions leave out the dynamics of amplifying feedbacks and are also skewed by leaving out the extent of ice melt in the Arctic, Greenland, and Antarctica. The predictions do not include the evidence from the paleoclimate record, which indicates that current greenhouse gas concentrations correlate with alarmingly higher temperatures and sea-level rise, and that in the past, climate change occurred in rapid shifts.

There is a grandiose sense of omnipotence at work, as if this is still the best of all possible worlds, while all evidence points to the inevitable, irreversible melting of all Earth’s ice, and the inevitable mass migrations that will be necessary.

A Barrel of Oil Trumps a Human Life

At the base is the belief that all can be commodified and monetized. The same unit of measurement is used to price a barrel of oil and human life. It is the exchange value of a person’s life, and the barrel of oil has more value in this society. Jonathan Schell, writing about nuclear weapons,1 describes the exterminism of liberal civilization. Nuclearism did not arise “to face extraordinary danger whether from Germany, Japan or the Soviet Union, but for more deep-seated, unarticulated reasons growing out of its own, freely chosen conceptions of national security… an intrinsic element of the dominant liberal civilization itself – an evil that first grew and still grows from within that civilization rather than being imposed from without.” Schell writes of the “pointless slaughter and destructive fury from the midst of that same liberal civilization.”

In liberalism as infamously enunciated by Margaret Thatcher, there is no such thing as society. More problematic than people’s relationship to the environment is people’s relationship with each other and what to do about power. In much of English literature, even family ties are torn asunder. The main child characters are orphaned or sacrificed for power. 16th century Shakespeare wrote of Romeo and Juliet’s cruel parents, Cordelia’s death due to her narcissistic father King Lear, child-killers Macbeth and entitled Richard III. In Anglophone countries, there is a long history of separating children from their families. 18th century Jonathan Swift wrote of the anti-human, monetized underside of Enlightenment thinking: “A Modest Proposal” recommended that parents could relieve themselves of the responsibility of caring for their children by selling them for food to rich people. What a contrast to writers of former British colonies like Rohinton Mistry who sensitively portrays ordinary decency and caring in the novel Family Matters. Climate historians Bonneuil and Fressoz identify the very specific causes of the climate catastrophe as coming from the British political economic order under liberalism, and that “Anglocene” more helpfully clarifies this era than Anthropocene.

Who do I mean by “et al”? They are people in positions of influence and power who have not taken it upon themselves to be fully informed about the state of the climate or of society: the National Energy Board, corporate shareholders, pension boards, international financial institutions, private banks, and the military/industrial/security complex. How many people in the government have read James Hansen’s 2009 book Storms of My Grandchildren, explaining the climate system? Can they explain climate sensitivity, amplifying feedbacks, carbon sinks, or paleoclimate findings? Do they know what is exempt under the Kyoto Protocol? My experience is that they cannot answer these questions. Do they even know about the Nuclear Ban Treaty and that their ignorance and inaction cause premature death? •