A Tale of Two Toilets: Profiting from Necessity? 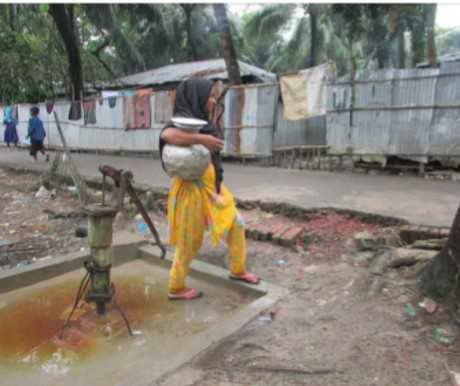 Yet toilets and sanitation remain a global crisis with multiple causes. It is a known and well-documented problem; Mike Davis, in his 2007 book Planet of Slums, has a section “Living in Shit” in which he quotes Frederick Engels: “Over two hundred people shared a single privy” in Manchester. In 2007, ten million people in Kinshasa had no waterborne sewage system, and there were only ten working pit latrines in Kibera for 40,000 people by the end of the 20th century. War and militarization also destroy sanitation infrastructure. In Gaza, Baghdad, Fallujah, Sana’a, power supply is the first thing bombed, wiping out water treatment and sanitation. The Yemen and Haiti cholera epidemics are directly attributable to the military presence. For at least a decade, official agencies have repeatedly warned that Gaza is unlivable because of contaminated water and lethal sewage spills which have caused death.

In 2013, the UN General Assembly designated November 19 as World Toilet Day. On October 1, 2018, the World Health Organization launched its first (!) global guidelines on sanitation and health. At present, the UN puts the number of people living without household toilets at 4.5 billion. Open defecation leaves women particularly vulnerable to rape, and approximately 314,000 children die each year because of poor sanitation. “The transmission of a host of diseases, including cholera, diarrhea, dysentery, hepatitis A, typhoid, and polio, is linked to dirty water and inadequately treated sewage. Poor sanitation is also a major factor in transmission of neglected tropical diseases such as intestinal worms, schistosomiasis and trachoma, as well as contributing to malnutrition,” the WHO states.

The Gates Foundation and the small NGO Practical Action offer very different, and very telling, solutions about toilets. Practical Action prides itself on practical, feasible, and ingenious ways to improve rural and urban life for impoverished people. According to their website, last year they helped nearly 620,000 people access clean water, sanitation, and waste services. “We also advocate tirelessly to demand that governments, both nationally and at city levels, include poor people in their sanitation planning and provide transparency on sanitation spending.” The website shows that ventilated pit latrines are “cheap to build, easy to understand and maintain, no running costs, maintenance is very simple, does not need water to operate, controls flies and smells…”

A second type of toilet, bio-latrines, also do not need water, and they produce organic manure; a disadvantage is that they are more expensive, but costs can be recovered by selling organic fertilizer and methane gas. The toilet blocks can also house showers, and methane gas can be used for cooking and lighting. This practical NGO realistically states that it would be difficult to provide this second kind of latrine for every house in an area.

Bill and Melinda Gates Foundation’s Reinvent the Toilet Challenge was initiated in 2011 and is now in its third phase with sixteen different research teams around the world. Gates says of himself that he never thought he would turn from a computer whiz into a “toilet geek.” He’s “committed to the task, since better toilets could help save millions of lives and open up an entirely new market.”

In the first phase, the California Institute of Technology received the $100,000 first prize for designing a solar-powered toilet that generates hydrogen and electricity. Loughborough University in the United Kingdom won the $60,000 second-place prize for a toilet that produces biological charcoal, minerals, and clean water. University of Toronto won the third-place prize of $40,000 for a toilet that sanitizes feces and urine, and recovers resources and clean water. Special recognition and $40,000 went to Eawag (Swiss Federal Institute of Aquatic Science and Technology). The toilets were not field-tested, as both the Gates Foundation and the World Health Organization determined that they were prohibitively expensive and energy intensive. The manufacture of porcelain toilet bowls is energy intensive and requires firing at 1,203℃.

The latest phase of Reinvent the Toilet Challenge was launched at the Gates Expo in November, 2018. “Companies from China (Clear, CRRC, EcoSan), the United States (Sedron Technologies), India (Eram Scientific, Ankur Scientific, Tide Technocrats), and Thailand (SCG Chemicals) announced the availability of the world’s first pathogen-killing reinvented toilets and small-scale waste treatment plants (called omni-processors), which are now ready for sale to municipal and private entities.” “This Expo showcases, for the first time, radically new, decentralized sanitation technologies and products that are business-ready,” said Bill Gates during the opening plenary of the Reinvented Toilet Expo. “It’s no longer a question of if we can reinvent the toilet and other sanitation systems. It’s a question of how quickly this new category of off-grid solutions will scale. Development finance institutions at the Expo – including the World Bank, the Asian Development Bank, and the African Development Bank – announced commitments with the potential to unlock $2.5-billion in financing for City-Wide Inclusive Sanitation projects that provide people in all parts of a city – including the poorest neighborhoods – with safely managed sanitation services.” The prize money itself could have funded thousands of Practical Action toilets.

The Gates toilet is top-down in planning and design and quite possibly energy-intensive to manufacture and distribute, while Practical Action is cooperative and communal in planning, design, and installation. The externalities of the toilets also need assessment, including materials, the resources used in their production, and all transportation costs. The Gates toilet has been in “transition” for six years, while the Practical Action toilet does not require any delays or transitions and is already widely used, saving lives and preventing severe and lifelong illness. According to Forbes, the Gates Foundation, funded by capital gains, is charitable and not taxed; the federal government has “likely lost out on $15 to $20-billion.”

There are related tales of great concern. The basic material need for water and sanitation is for the most part neglected across the political spectrum, including the anti-war and climate communities that focus on higher level living conditions like replacement jobs and personal fulfillment. Austerity and dismantling of public services brings overwhelming hardship to the global population, especially at a time of massive displacement due to war and to climate change.

The COP meetings, and the IPCC, continue to obfuscate and delay even acknowledging the dire human situation. What is most egregious is that the solutions are readily available, affordable, and easily implemented. In addition to the institutional barriers and obstructions, there is the grandiosity, narcissism, and lack of integrity among the people whose prime ostensible responsibility is fiduciary. The institutions responsible for polluting the living environment and immiserating billions of people now presume to profit from technology that makes human feces pristine: turning fecal infrastructure into gold. •