Slovenia’s Parliamentary Elections: A Xenophobic Right, a Fragmented Centre and a Rising Left

The outcome of the recent Slovenian elections shows a fragmented political landscape, a worrying increase in support for right-wing populism and luckily, an electoral gain for the left’s Levica party that has strengthened its position and improved its manoeuvering space.

On 3 June, Slovenia went to the voting stations to elect a new parliament. The vote took place about a month before the planned ordinary elections, almost three months after the SMC-led government resigned in a tactical manoeuvre after seeing its support dwindle. The supposedly left-liberal government coalition, composed of the centrist SMC party led by Miro Cerar, the Social Democrats and the single-issue oriented DeSUS (The Democratic party of Slovenian Pensioners) presided over a period of relative stability and solid economic growth. However, while the general outlook of the country’s economic future was internationally seen as positive, it has not yet translated into higher wages or more regular forms of employment, while several areas of state services are still suffering the effects of the austerity measures imposed during the last SDS-led government in 2012. The Cerar government did not do much to reverse this, preferring to focus on fiscal consolidation. It was also the government that erected a razor-wire at the Slovenian-Croatian border. 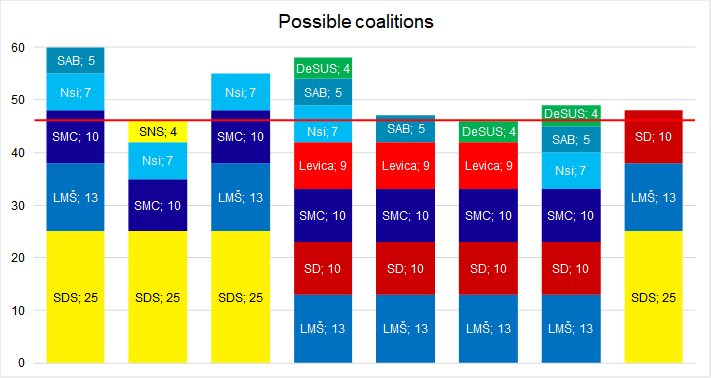 The resignation of the Cerar government came in a tough period of unsuccessful negotiation with state unions and several problems related to the potential sale of NLB, one of Slovenia’s more important publicly owned banks and the construction of a new railway track for the port of Koper, two of the most highly politicized topics right now.

Janez Janša’s SDS (Slovenian Democratic Party) came in first with almost 25 per cent (25 MPs) of the entire ballot. SDS, which has been the largest opposition party in the constitution of the last government was previously a rather standard centre-right pro-EU party until it gradually developed its own Fidesz-like turn, choosing to adopt an increasingly polarising rhetoric focusing on what it claims are both external and internal threats, from old communist deep state structure in the judiciary, to the Islamic invasion of Europe. Orban himself was a visitor at the party’s congress, giving it explicit support. One could not help but to notice how some of the media it controls adopted a series of fear-inducing tactics, including daily reports on refugee waves coming increasingly closer to Slovenia’s borders on the week before the election.

It seems that this same rhetoric backfired to some extent, allowing Zmago Jelinčič’s SNS (Slovenian National Party), a national-chauvinist and populist relic from the 90s to come back into parliament (with 4.17% and 4 MPs) to the surprise of most, taking away a certain measure of what would otherwise probably be votes for SDS. His party’s presence reinforces the xenophobic elements in parliament and is thus nothing to be particularly happy about, although it is dubious it has any larger political ambitions at this time, as it is widely seen as Jelinčič’s personal project to appropriate state-allocated funds for political parties, whose passing of the 4% threshold was accidental.

The most explicitly neoliberal party NSi (New Slovenia – Christian democrats) gained 7.16% (7 MPs). The number of MPs of these three parties, who would otherwise most likely take part in an SDS-led government, is not enough to form a coalition (36 out of 46 needed for a parliamentary majority in the 90-seat parliament).

The second party in the elections, LMŠ (Marjan Šarec’s list) is a catch-all political party whose political coordinates are to this point somewhat confusing. Widely seen as an anti-Janša candidate, Šarec managed to convince 12.60% of voters (13 MPs) with a neither-left-nor-right rhetoric similar to the one used by SMC during the previous elections, albeit a bit less successfully, due to the larger number of centre-to-centre-left parties that managed to enter parliament (SD with 9.93%, SMC with 9.75%, SAB with 5.11% and DeSUS with 4.93%). In the most likely scenario, the one in which SDS does not manage to form a coalition government, Šarec will be the one trying to form it. This means that a potential SMC + SD + SAB + DeSUS coalition needs another partner to form a parliamentary majority. Considering the public rejection of the idea of joining an SDS-led coalition from most of these parties, three options are left, if another election is to be evaded. Either NSi, SNS or Levica.

The most positive news regarding the elections is the success of the Levica party, who managed to increase its result from 5.97% to 9.33%, increasing the number of its MPs from 6 to 9.

The democratic socialist party, which still managed to pass certain measures (such as the funding of school lunches for socially deprived children) from the opposition has most likely been put in the position of kingmaker for the next government. While its program is the furthest away from the other parties in parliament, it could negotiate control over some ministries in line with the topics it has emphasized during the election campaign. More state funding for higher education and research, the increase of the minimum wage to €700, mandatory minimum wage for state workers from the so-called J-wage group in the public sector, the raising of the minimal welfare payouts, rerouting of state funds from the military to other state services, are all areas where the other members of the potential centre-left might be quite inflexible, a negotiation space however, will remain open if a majority coalition government cannot be formed in any other way.

This gives Levica unprecedented power in Slovenian politics, but at the same time also an unprecedented responsibility. It is by no means an easy task to negotiate with the interest of the current political mainstream. The situation, however, provides both danger and hope. •