The Socialist Project (SP) joins Israeli, Palestinian, and international civil society organizations in condemning the “Basic Law: Israel as the Nation State of the Jewish People” which recently passed the Israeli Knesset (with 62 in favor, 55 against and two abstentions on 19 July 2018). The Jewish supremacy enshrined in the law amounts to the formal incorporation of apartheid as an Israeli constitutional principle. 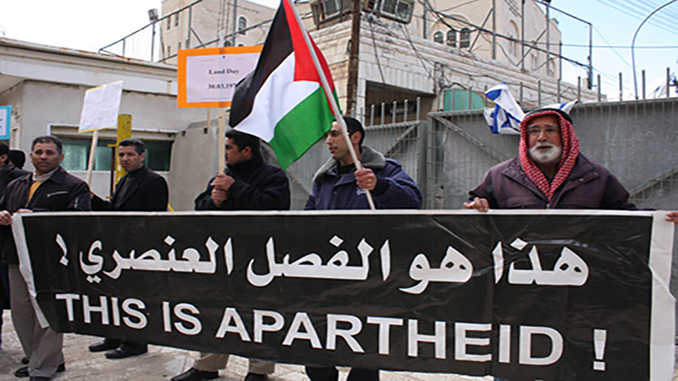 Apartheid is defined by the United Nations (in the Rome Statute of the International Criminal Court) as “an institutionalized regime of systematic oppression and domination by one racial group over any other racial group or groups.” Such an order has long been in place in the Occupied Palestinian Territories (OPT), as Jewish settlers illegally colonizing Palestinian lands are afforded legal rights denied to the Arab majority in these areas. Moreover, a less formal apartheid regime has similarly existed within Israel’s legal borders, where scores of discriminatory laws and practices systematically violate the rights of Palestinian residents – 21 per cent of Israel’s population – despite some formal protections.

Nevertheless, the new law marks the formalization and entrenchment of this regime within the Israeli constitution, finally and fully eliminating any pretence of equality for Palestinian residents of Israel while further weakening already extremely limited protections for those in the OPT. The law explicitly commits the state to promoting the illegal colonization and ethnic cleansing programs in the OPT that are rapidly eroding any plausible two-state settlement, eliminates Arabic as an official language, and much more. Indeed the full extent of the law’s potential harmful effects on Palestinian rights is still unclear.

Israeli apartheid, and the systematic human rights abuses and war crimes that support it, is crucially enabled through aid from the Canadian and U.S. governments. Along with the now routine crimes of its brutal occupation, these governments have helped Israel evade accountability for massacring unarmed Palestinian demonstrators in recent months. Such aid also supports Israel’s current escalation of bombing of Gaza, carried out without so much as attempting to craft a pretext, with the primary goal of terrorizing and murdering civilians and destabilizing Palestinian institutions. The Socialist Project calls on the Canadian government to immediately cease all military and other aid to the Israeli state, and to exert maximum pressure on Israel to abide by international law, respect Palestinian rights, and end the occupation and colonization of Palestinian land.

The Socialist Project further expresses its solidarity with the statement of the Palestinian Boycott National Committee presented below. We also present another article that provides further context for the new Basic Law.

— Steering Committee of the Socialist Project

On July 19, Israeli lawmakers gave their final approval to the “Basic Law: Israel as the Nation State of the Jewish People” bill that unambiguously defines Israel as a state that belongs exclusively to the “Jewish people.” This is despite the fact that one in five citizens of Israel is an indigenous, non-Jewish Palestinian.

Palestinian members of the Israeli Knesset condemned the law, which enjoys constitutional power, as an “apartheid law.”

Adalah, a leading Palestinian human rights organization in Israel, describes how the law “affirms the principle of apartheid in housing, land and citizenship.” It concludes that “this law constitutionally sanctions institutionalized discrimination.”

“As a Palestinian citizen of this state, this bill entrenches my third-class citizenship on the land where generations of my family have lived since long before the state of Israel even existed.

The Jewish-Israeli majority is loudly reminding us indigenous Palestinian citizens of Israel that we are not welcome in our own ancestral homeland. My people have always suffered from legalized racism by the state of Israel and its institutions, but this law makes our apartheid reality the law of the land like never before.

As ‘non-Jews’ we are already not allowed to buy or rent land on 93% of the area controlled by the Israeli state, and many of our communities are declared to be ‘unrecognized’ and bulldozed out of existence by Israeli forces. I received a racially segregated and inferior education in a school system that conspicuously privileges Jewish-Israelis.

Israel is now stripping us of any semblance of equal rights based solely on our ethno-religious identity. It’s even demoting our language from one of the state’s two official languages.”

“Israel has dozens of racist laws, including some which strikingly fit the UN definition of apartheid. But with the constitutional power of this Basic Law, Israel is effectively declaring itself an apartheid state and dropping its worn-out mask of democracy.

From now on, it will not just be legal to racially discriminate against the indigenous Palestinian citizens of the state. It will be constitutionally mandated and required. This should stir people, institutions and governments to take effective action to hold Israel accountable.”

“If ever there was a time for boycott, divestment and sanctions against Israel’s system of oppression, it is now. Israel’s official adoption of apartheid opens the door for the Palestinian people, Arab nations and our allies around the world to pressure the UN to activate its anti-apartheid laws and impose serious sanctions on Israel like those imposed on apartheid South Africa.

We shall double our efforts to further grow the BDS movement for Palestinian rights to hold Israel accountable for all its crimes against our people. No Israeli law will erase our right to self-determination in our homeland or the right of our refugees to return home. No Israeli far-right government, with all the blind support it receives from xenophobic and outright fascist forces in the United States and Europe, will ever extinguish our aspiration for freedom, justice and equality.” •

This article first published on July 19, 2018 at mondoweiss.net.

A State That Belongs to Only Some of its Citizens

There is a form on the Israeli Interior Ministry’s website, where one can order duplicate and translated copies of a birth certificate. On that form is a drop-down menu, above which it is written: “Nationality.”

In that drop-down menu you will find a list of nationalities which – if one were to attempt to deduce from it how Israel defines nationality – defies all logic. The nationalities listed include ethnicities without their own states, states without distinct or exclusive nationalities/ethnicities, and long-defunct “minority rule” colonial constructs.

What you won’t find is the one nationality you might most expect to: “Israeli.” As absurd as it may sound, the State of Israel does not actually recognize an Israeli nationality. In fact, the state has on several occasions argued in court that no such a nationality exists.

(To be fair, speaking of things Israel refuses to exist, the Interior Ministry drop-down menu doesn’t include the “Palestinian” nationality either.)

That Israel does not acknowledge an Israeli nationality is crucial for understanding why a “constitutional amendment” currently being proposed by Netanyahu and his government – the Jewish Nation-State law – is so problematic.

According to Netanyahu and his government’s proposed law, Israel does not belong to Israeli citizens, more than 20 per cent of whom are not Jewish. Instead, Israel is the state of the Jewish people, roughly half of whom are not even Israeli.

Constitutionally anchoring two classes of citizens – those to whom the state belongs and those to whom it doesn’t – is particularly problematic when you consider that Israel doesn’t have any constitutional guarantees of equality on the books. And considering the number of discriminatory laws already on the books (from family unification, immigration, land ownership, housing discrimination, etc.), it’s not a stretch to imagine any number of situations in which the courts determine “Jewish” rights to trump principles of equality once the Nation-State Law is passed.

One of those scenarios is actually enshrined in the current version of the law: it constitutionally legalizes segregation. True, there are already legal ways to create segregated communities in Israel, but the new law would make the very idea of segregation something that is integral with the state’s values.

The Jewish Nation-State Law also specifies that the right to realize national self-determination in the State of Israel – the right to decide upon self-governance and what it looks like – is uniquely held by the Jewish people.

Those points, and particularly the last one, may seem relatively innocuous, particularly when coupled with the argument that most (but not all) rights in Israel are derived from citizenship and not nationality.

And that might be a reasonable, albeit flawed argument – if Israel didn’t un-democratically rule over millions of non-citizen subjects in an occupied territory the current government sees as its own. 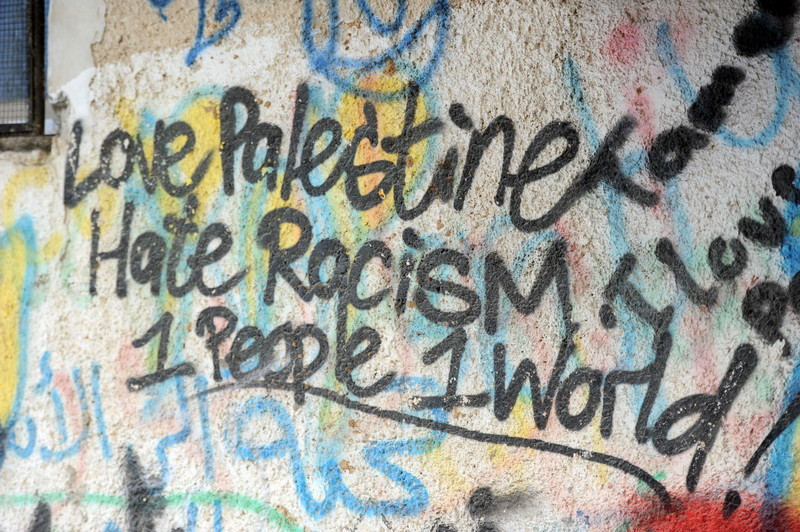 What does granting Jews the exclusive right to self-determination look like as Israel advances its creeping annexation of the Palestinian territories? What does it mean for Jewish Israelis living in the West Bank, who in a walking, talking manifestation of apartheid, carry with them Israeli civilian law while Palestinians in the exact same physical space are subject to Israeli military law?

What does it mean for the Palestinian national movement, which seeks to exercise Palestinian national self-determination in a territory the Israeli government would like to see become a part of Israel? What does it mean for the growing movement pushing for a single, democratic state for Israelis and Palestinians that guarantees equality for all, particularly if the most efficient means to that end is to demand equal rights under the existing Israeli regime?

Last month, the Knesset presidium rejected out of hand a counter-proposal to the Jewish Nation-State Law: the “State of All its Citizens” law. Submitted by the mostly-Palestinian Joint List party, the proposed Basic Law sought “to anchor in constitutional law the principle of equality for every citizen, while recognizing the existence and rights of two national groups, Jews and Arabs, who live within the state’s internationally recognized borders.”

Earlier this week, the Joint List MKs again submitted a constitutional alternative to the Jewish Nation-State Law, this time called the “Democratic, Multi-Cultural, and Egalitarian State” law. It, too was rejected by the Knesset without even being debated. •

Michael Schaeffer Omer-Man is the editor-in-chief of +972 Magazine.