On June 27, 2018, a coalition of over 2000 Canadian healthcare organizations and healthcare providers, including doctors, nurses, social workers, psychologists and midwives have signed on to an open letter, calling on the Canadian government to take the following four actions immediately:
1. End child detention and family separation in Canada.
2. End immigration detention in Canada.
3. End the Safe Third Country Agreement.
4. Call on the United States to end its practice of child and family detention.

We reproduce their important initiative here. 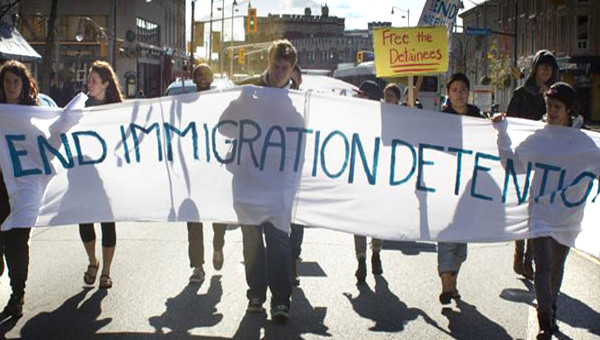 Over the past 6 years, Canada has held approximately 45,000 people in immigration detention. For the first time in over a decade, Canada is projected to see a sharp rise in the total number of detainees.

Children continue to be detained in Canada in large numbers, with current projections exceeding last year’s total of 162 children held in immigration detention.

We are a group of healthcare providers working in Canada who – like many around the world – have been watching with horror the news of the separation of over 2000 child migrants from their parents in the United States. This cruelty is apparently the newest front of the Trump administration’s war against asylum seekers. We’ve heard audio recordings of young children begging for their parents, and read first person accounts of migrants being told they will never see their children again.

As healthcare providers, we regularly see the results of childhood trauma in patients of all ages. Harm done at a young age can reverberate throughout one’s life, causing intense distress and health consequences. It’s no surprise to us that the American Academy of Pediatrics, the Canadian Pediatric Society, the American Medical Association, and the Canadian Medical Association have all come out with strong statements condemning the separation of migrant children from their families.

In Canada, immigration detention of both adults and children, and family separation, have been a long-standing and grave concern. Canadian research and reports have repeatedly shown the severe mental health impacts of even short-term detention on both adults and children, including elevated rates of depression, anxiety and PTSD symptoms in adults. Children also suffer severe symptoms such as regression of developmental milestones, sleep disruption, anxiety and depression.

As healthcare providers we urge our federal leaders to take action on this issue and consider how history will look back on what we as a country choose to do right now. While Canada’s practice of detaining migrant children is not new, the general public is now rapidly becoming more aware of it. It is hypocrisy to criticize the United States when children are being detained and separated from their families here in Canada, causing similar severe psychological trauma that physicians and other mental health experts are now speaking out about.

We call on the Canadian government to take the following actions immediately:

1. End child detention and family separation in Canada
Imprisoning children, or forcibly separating them from their parents, is simply not acceptable, no matter what the migratory status of the children or their parents.

2. End immigration detention in Canada
Currently, in Canada, migrants are detained in both immigration holding centres and maximum security jails. We join a group of Canada’s leading physicians, academics, lawyers, community organizers, and policy makers in calling for the government to stop holding immigration detainees in maximum-security correctional facilities and to end the practice of indefinite immigration detention. We join these experts in stating that: As a matter of principle, individuals should not be placed in immigration detention or separated from their families. If a person poses a danger to him or herself or to others, other legal measures outside the scope of immigration policy should be used to address such situations.

4. Call on the United States to end its practise of child and family detention
Following President Trump’s executive order, there is fear within the medical community that while the end of child separation is a positive step forward, more children and families will end up in immigration detention.

The organizations supporting the statement include:

The letter, along with the full list of signatories, can be found at endmigrantdetention.wordpress.com. •