Gaza: Who or What Has a Right to Exist?

Gaza: An Inquest into its Martyrdom (Verso, 2018), is an extraordinary book. It is also a difficult book to read. In his preface, Norman Finkelstein writes that this work “has been a painstaking, fastidious undertaking born of a visceral detestation of falsehood, in particular when it is put in the service of power and human life hangs in the balance.” He writes that “Gaza is about a Big Lie composed of a thousand, often seemingly abstruse and arcane, little lies. The objective of this book is to refute that Big Lie by exposing each of the little lies.” His meticulous inquest into Israel’s atrocities and the moral depravity within humanitarian institutions demands answers about who or what has a right to exist. 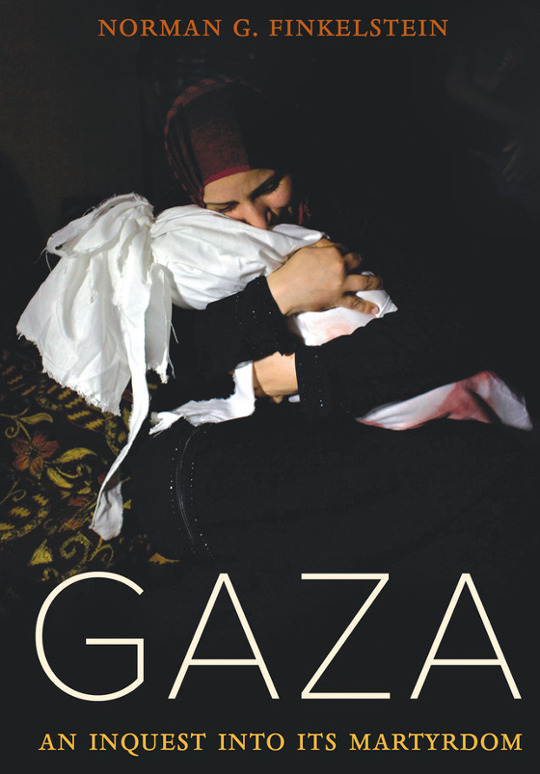 The book primarily investigates the official reports about Operation Cast Lead (2008-09), the Mavi Marmara (2010), and Operation Protective Edge (2014). Finkelstein attributes these assaults in part to Israel’s intention to prove its deterrence capacity after its defeat by Hezbollah in 2006. A pattern emerges of Israel’s surreptitious provocations that conceal its own aggression, use of disproportionate military force and targeting of civilians, specious legality, and lies that exonerate Israel and permit ever-increasing brutality. The Dahiya doctrine refers to Israel’s military strategy of acting immediately, decisively, and with disproportionate force. Dahiya is a suburb of Beirut that was flattened by Israel in the 2006 war.

Operation Cast Lead was preceded by Israeli assaults that destroyed Gaza’s infrastructure, cruelly named 2004 Operation Rainbow, 2004 Operation Days of Penitence, 2006 Operation Summer Rains and Autumn Clouds, 2008 Operation Hot Winter. After the democratic election of Hamas in 2005, Israel imposed a punishing blockade which UN Special Rapporteur John Dugard noted was the first time an occupied people was subject to sanctions and that were a violation of major UN Security Council and General Assembly resolutions and a ruling by the International Court of Justice. Israel attacked a civilian population imprisoned within its territory and already decimated by a ruined economy.

Israel attacked Gaza with the most advanced combat aircraft in the world, flying nearly 3000 sorties and dropping 1000 tons of explosives. The U.S. Senate unanimously supported the attack and the House vote was 390 to 5. New York Times columnist Thomas Friedman “joined the chorus of hallelujahs during Cast Lead” and expressed hope that Israel would “’educate’ Hamas by inflicting a heavy death toll on Hamas militants and heavy pain on the Gaza population.” Foreign Minister Tzipi Livni “audaciously declared in the midst of Cast Lead that ‘no humanitarian crisis’ existed in Gaza. UNRWA director described what was obvious from eyewitness photographs and newscasts: “We have a catastrophe unfolding in Gaza for the civilian population…. They’re trapped, they’re traumatized, they’re terrorized.” What was also obvious was that Israel systematically targeted Gaza’s civilian infrastructure. 1400 civilians were killed, including 350 children.

Amnesty International and the Goldstone Report established that Israeli soldiers, not Hamas, used civilians as human shields. The Goldstone Report found that much of the devastation was premeditated and anchored in a military doctrine. The Report stated that the assault constituted “a deliberately disproportionate attack designed to punish, humiliate and terrorize a civilian population….” The Report also paid tribute to “the resilience and dignity of the Gazan people.” It recommended that individual states “start criminal investigations in national courts, using universal jurisdiction….” It noted Israel’s “seemingly deliberate cruelty” to children.

On April 1, 2011, Goldstone disowned the “devastating UN report of Israeli crimes carrying his name.” The gist of his recantation was that Israel did not commit war crimes and that it was fully capable of investigating violations of international law. The other three investigators issued a statement unequivocally affirming the Report’s original findings. Finkelstein goes into considerable detail about Goldstone’s recantation which essentially legitimized Israel’s alibis: that Israel does not target civilians but that civilian casualties were due to error or were collateral to targeting militants, and that its grossly disproportionate destructiveness was justified self-defence.

Goldstone attributed his recantation to a drone photograph of the Al-Samouni family compound that Israel offered as evidence 22 months after the massacre of 29 family members. Several family members were actually gathering firewood but the blurry photograph purported to show that they were carrying rocket launchers. Israeli soldiers based close to the house had even warned the commanding officer, Colonel Malka, that the Al-Samounis were civilians. The Israeli investigation claimed that the massacre was just a “simple mistake.” From his investigations, Goldstone also knew well from soldiers’ testimonies that they had license to go “crazy,” “lunatic,” “insane,” “to destroy everything in its way” and “kill everything that moves.” John Dugard, previous UN Special Rapporteur, adjudged that “there are no new facts that exonerate Israel and that could possibly have led Goldstone to change his mind.” Finkelstein’s verdict: “In one fell swoop, Goldstone inflicted irreparable damage on the cause of truth and justice and the rule of law…. He poisoned Jewish-Palestinian relations, undermined the courageous work of Israeli dissenters, ‘and – most unforgivably – increased the risk of another merciless IDF assault. … the singular distinction of Goldstone’s recantation was that it renewed Israel’s license to kill.”

Israel’s killing of nine passengers on the Mavi Marmara, part of the Gaza flotilla to break the blockade of Gaza, followed the same pattern of previous assaults: Israel characterized their victims as terrorists; the pre-planned attack by Israeli commandos was vastly disproportionate. The commandos opened fire on the unarmed passengers with tear gas, smoke and stun grenades, and live ammunition. Israel appointed Jacob Turkel, a former Israeli Supreme Court justice, to chair Israel’s investigation, and UN Secretary General Ban K-Moon appointed the corrupt and criminal Colombian president Alvaro Uribe to chair a UN Panel. According to the official investigations, the “shaheeds” armed themselves to kill Israelis but did not manage to kill even those in their custody, whereas the Israelis took “every precaution and exercised every restraint not to kill anyone but ended up killing nine people.” The UN Report invented a novel legal fiction by differentiating the land and sea blockades as if boats are for smuggling weapons, thereby justifying the naval blockade and attack on the Mavi Marmara. “It must be a first … that a report bearing its [UN] imprimatur vilified the victims of a murderous assault because they sought to cast light on an ongoing crime against humanity.”

The disproportion is self-evident. Hamas killed 73 Israelis of whom only 8% were civilians while Israel killed 2200 Gazans of whom fully 70% were civilians. Israel killed 550 [recent figure is 556] children, and Hamas killed one Israeli child. The ratio of civilian dwellings destroyed was 18,000:1. As well, Israel again destroyed vital infrastructure, leaving Gazans without electrical power, potable water, medical care.

Finkelstein dissects the major investigative reports. Both the Amnesty and the UN Human Rights Council investigations of Operation Protective Edge refused to accuse Israel of committing war crimes and crimes against humanity or of violating the UN Charter or the Geneva Conventions. These reports appallingly presumed an equivalence of suffering by Gazans and by Israeli Jews. Joining in this whitewash were UNICEF, the Lancet medical journal editor Dr. Richard Horton, Jacques de Maio of the International Committee of the Red Cross, and International Criminal Court former chief prosecutor Luis Moreno-Ocampo who heaped praise on israel’s respect for the “rule of law.” The International Court of Justice which had previously declared the settlements illegal, evasively claimed that Protective Edge was “highly complicated,” to which Finkelstein asks “where the complication lay: was it when Israel dropped 100 one-ton bombs on Shja’iya or when it indiscriminately fired 20,000 high-explosive artillery shells in densely populated civilian areas?”

These investigations bought into Israel’s claims that it only targeted “militants.” Finkelstein commented: “On this evidentiary standard, Amnesty couldn’t find that Israel had committed a war crime unless and until Israel acknowledged its commission.” Amnesty accepted Israel’s internal investigation which “found that the attacks had been carried out in accordance with international law.” The UNHCR even accepted Israel’s alibis about the killing of 18 people at the UNRWA Beit Hanoun School. Finkelstein: Israel did not take “all feasible precautions to protect civilians, even though it did take all feasible precautions to set them up for a bloodbath.”

Both Freud and Marx explored the distortions of thinking in which abstractions are treated as material or animistic things, an observation that appears to be lost in much political discourse. The most egregious examples are that the “state” and “corporations” or even the “planet” have a “right to exist” while people do not. Finkelstein’s inquest concerns depraved individual behavior made credible and enforceable in association with abstract powerful institutions. Israel’s vicious massacres are hardly the first. Post Cold War, the U.S.’ 1991 bombing of Baghdad, the ensuing UN sanctions leading to half-million child deaths, and the sieges of Fallujah were among many other atrocities showing that it is easy to get away with murder.

What are the forces from within and without that protest collusion with murder? Some institutions (always created by people and made up of people) are inherently and historically destructive to human life, like the military, corporations and a range of financial institutions, and perhaps the UN Security Council, while other institutions have an uneven record or are modifiable.

In today’s world, states must be assessed in terms of the deaths they cause or facilitate inside and outside their borders. Similarly, the humanitarian organizations investigated by Finkelstein necessitate this kind of standard. Amnesty and the UNHRC are cases in point. Astonishingly, Saudi Arabia remains chair of the UNHRC. In 2012 Suzanne Nossel was named chair of AIUSA. On Nossel’s watch, child murder justifier Madeleine Albright gave the keynote address to the AIUSA AGM in 2012. Maximilian Forte, author of Slouching towards Sirte: Nato’s War on Libya and Africa, reported that In her State Department job, Nossel had played a key role drawing up the UN Human Rights Council resolution that ultimately formed the basis for Security Council Resolution 1973 that led to the NATO intervention in Libya. Amnesty had also credited the unfounded reports about Iraq and the incubator babies that was used to justify the devastating 1991 war.

Was there dissent within Amnesty? Have there been retractions or admissions of guilt and of responsibility for complicity in so many deaths? The good work of Amnesty then serves to lend credibility to its disastrous positions.

In this book Finkelstein expresses outrage that Israel is exonerated by prestigious people and institutions, allowing escalation of war crimes and crimes against humanity. Persistent exposure of the little and big lies needs to be part of the struggle if there is really to be a Never Again for all people. •