Homeless people in Toronto are in crisis. In the first nine months of 2017, the city has recorded an average of 8 homeless deaths every month. Most of those who died were under the age of 50.1 Emergency shelters, whether they serve women, men, youth, refugees, or families, are packed full every single night, winter and summer. Even the sub-standard backup winter warming centres, 24 hour drop-ins, and volunteer-run overnight programs are full, despite conditions within most of them being appalling.

City Council can’t claim ignorance. For years, homeless people, front-line workers and advocates have raised an alarm about the worsening situation. Beyond the innumerable deputations and press conferences that highlighted the problem, within the last two years the Ontario Coalition Against Poverty (OCAP) has organized protests right outside the doorstep of the Mayor’s luxury downtown condominium on three separate occasions calling for action. Still, the Mayor pushed through a 2.6 per cent cut to the Shelter, Support and Housing Administration in the 2017 budget (though he was later forced to reverse some of them), effectively guaranteeing the situation would get worse. Instead of expanding emergency shelters to meet the desperate need, and prepare for the winter, the City chose to expand its reliance on the backup survival spaces, where notoriously, basic shelter standards don’t apply. Most of these spaces are only available during the winter, and some are run by faith groups on a voluntary basis.

As December approached, tireless work by homeless advocates resulted in two significant motions making their way to the Council floor – to add 1000 new beds to the city’s emergency shelter system, and two, to open up the two federal armouries as emergency homeless shelter to relieve pressure on the system in anticipation of the coming winter. Mayor John Tory, with assistance from the city’s “poverty reduction advocate” Councillor Joe Mihevc, however, worked to defeat both motions. 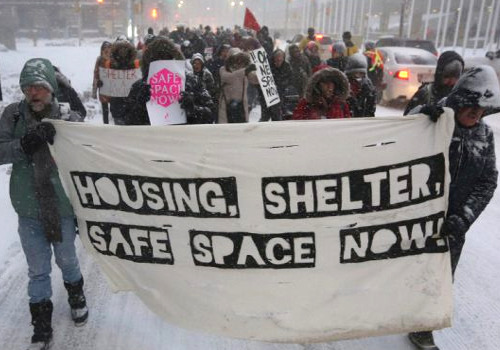 As extreme cold gripped the City in late December, the city’s hopelessly overwhelmed shelters scrambled to meet the need, and as likelihood of freezing deaths became apparent, so did media outrage about Tory’s earlier decision to not open the armouries. Faced with increasing public condemnation, Tory back-peddled and opened the Moss Park armoury in January, but the underlying problem of the severe shortage of shelter beds remains unaddressed.

This means, come April 15, when the winter respite centres close down, over 650 people currently crammed into overcrowded warming centres, drop-ins, and volunteer-run overnight programs will simply be dumped back on to the streets. The current situation demands the addition of at least 1500 permanent new shelter beds to guarantee a spot for everyone in need. The City’s plan, at-best, might add about 400 beds over 2018; an expansion that will soon be undermined by the impending closure of Seaton House, the largest men’s shelter downtown. This means the crisis will persist, along with its lethal consequences.

City Council cannot be allowed to feign surprise about the predictable consequences of their actions, and we, in the left, cannot allow the City’s callous neglect to keep jeopardizing the lives and safety of homeless people. On January 24, as the Mayor meets with his executive committee to discuss the 2018 budget, OCAP is calling for a rally to challenge his hypocrisy on homelessness. Together, with our allies, we will be demanding that the City Council:

A common refrain of Mayor John Tory and other politicians is to blame the shelter crisis on increasing numbers of refugees within the shelter system and on people living with mental health issues. Liberal Member of Parliament Adam Vaughan has gone so far as to say, “Homelessness is a healthcare issue; it is not a poverty issue… If we address it as a healthcare issue, it becomes a much easier problem to understand and therefore a much easier problem to solve.”2 By that logic, the fact that the shelter crisis is unfolding in a city with the highest rate of poverty among major urban centres in Canada3 is a mere coincidence, the housing crisis hasn’t disproportionately impacted poor people, and city withholding nearly $14-million from its homelessness prevention fund4 over the past four years had no impact on people’s ability to keep a roof over their heads.

The absurdity of this position is plain to see and so is the transparent attempt at evading responsibility. Unless challenged, all three levels of government will continue to implement policies that will push ever more people into poverty, and from there, onto the streets. But the fact that the City was forced to open almost six respite centres this winter, including one of the armouries, is a testament to the power and necessity of fighting back. For this gain to translate into a real victory, however, we must now push harder than ever for all three levels of government to respond to the homelessness crisis, and to build not just shelter, but also housing that low-income people can afford. People’s lives depend on this struggle and we must win it. Join us. •