Kinder Morgan’s Pipeline Shall Not Pass

Shortly after British Columbia’s recent election, Alberta Premier Rachel Notley publicly declared that one province cannot hold another hostage by blocking a pipeline. She was referring to the fact that both the B.C. New Democrats and the Green Party had campaigned on platforms focused on building the new energy economy and opposing new pipelines. Many who live in B.C. reject Notley’s specious logic and instead believe that one province cannot trample First Nations’ rights and ruin the earth for the rest of the country.

A significant majority of Canadians know that climate change is real and is already happening. Polling shows that most want Canada to meet its commitments under the Paris climate agreement and start taking meaningful action against climate change. 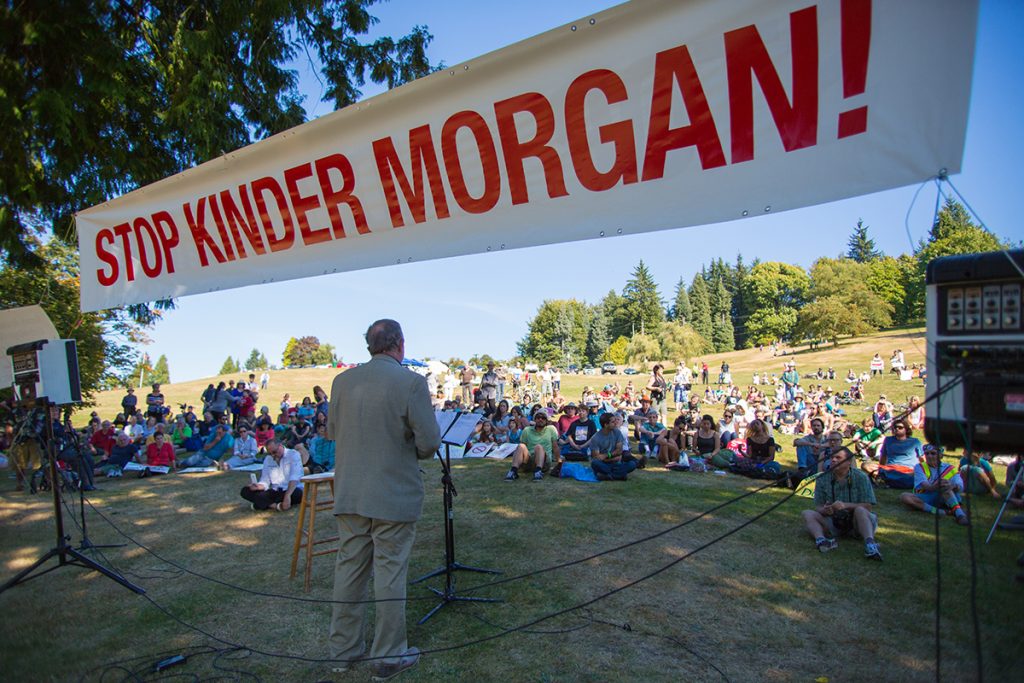 Yet the Trudeau and Notley governments speak the lines given to them by big oil. You’ve heard them: “Canada must get its resources to tidewater,” or “you can have pipelines and wind turbines.” These are lines right out of the fossil fuel songbook. They are also demonstrably false. Scientists, economists and the general public have raised objections that have not been answered. The bottom line is that all reasonable estimates show that Canada has ample pipeline infrastructure to meet its needs while we make the transition to the new economy.

Subsidies for Fossil Fuel or Incentives for Clean Energy?

The new energy economy is based on energy sources other than “old economy” fossil fuels. Though some petroleum products will be used for the foreseeable future, we cannot afford, economically or environmentally, to continue burning fossil fuels at current rates. For the first time in history, an economy based on clean energy, electric transportation, smart grids, energy storage and increased energy efficiency is within our reach. Such economies already exist in other parts of the world. One important outcome for society is more local jobs when fossil fuel subsidies are diverted towards incentives for clean energy.

During the B.C. election, the Green Party and the NDP both made it clear they think the Kinder Morgan pipeline expansion is not compatible with building the new economy. Between them, the NDP and the Greens got over 60 per cent of the votes. Their agreement to govern means that B.C. will have a representative government. Hopefully this new government will do what they have said they will do in their forward-looking agreement. We need a strong provincial voice, as the federal government has already caved on environmental protection and new economy development.

In announcing the federal cabinet’s decision on Kinder Morgan’s proposed expansion, Prime Minister Trudeau said it was based on “science and fact.” That’s rhetorical nonsense. Science collects and analyzes evidence, but governments must apply the science to decide the best outcomes for their citizens. Did science say the oil industries should have subsidies and clean energy should not? Did science say that the melting of the Arctic ice was A-okay? Maybe ask a polar bear to present a paper. It wouldn’t be allowed anyway, as the National Energy Board’s review of the proposed Kinder Morgan expansion did not permit testing of evidence through cross-examination.

In campaigning for election, Trudeau said: “while governments grant permits for resource development, only communities can grant permission.” No matter what Notley or Trudeau say, the people of B.C. have not granted permission for new bitumen pipelines. Sixty per cent of the B.C. electorate voted against the B.C. Liberals’ and their party’s devotion to the fossil fuel empire.

We think the shift of voters is a direct indication of the desire of many British Columbians to move to a sustainable new energy economy. The old-economy rhetoric loses more power every year. We call on the Green Party and the New Democratic government of B.C. to get on with the new economy, and that means no more increasing bitumen exports or continuing to subsidize fossil fuels. •

Michael Hale is a director of PIPE UP, a network of people in BC’s Fraser Valley committed to educating themselves and their communities about tar sands pipelines and the alternatives. He is a founder of the Yarrow Ecovillage, dedicated to finding more sustainable ways of living. This article first published by Ricochet.