Labour and the Corporate Economy

General Electric (GE) is moving out of Peterborough. It leaves the town, the county, Ontario and Canada with an enormous mess. One of the world’s largest conglomerates has become the poster child for a sick corporate citizen in a sick economic system. It’s not just about leaving hundreds of former workers dead or dying of cancer after having literally given their last breath to the company. 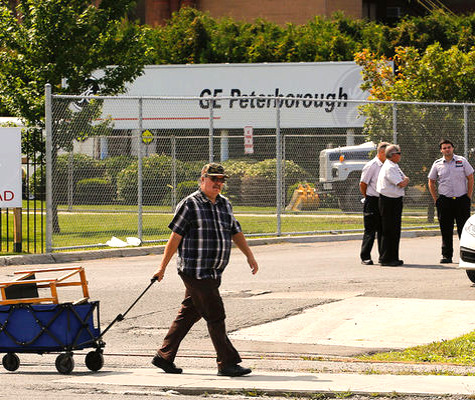 We’re not referring to the 21 acre property in the heart of the “Electric City” that the Company has occupied for over a century with many saying the soil underneath is so contaminated that remediation is going to cost a fortune. It’s all of that and much more. General Electric, that now heads out of town for greener pastures, is a symptom of all that is wrong with the political economy of Canada and a system predicated, when all is said and done, solely on profitability and the corporate bottom line.

Last week, General Electric, the company, which counts Thomas Edison as one of its founders, sent a “Dear John” notice to its last three hundred and fifty plus employees.

Naturally, the employees and the community are in shock. The Union will be meeting with the Company to discuss severance, re-training and other negotiated shut-down protocols while the community will be investigating other options for jobs – in a community that has been vying for the title of Canada’s unemployment capital.

It is a familiar, but no less painful, story for Canadians and their communities.

GE, one of the 14th largest conglomerates on the planet used to be in the business of making appliances, generators, medical or pipeline equipment, and light bulbs, etc. It then became a conglomerate in aeronautics, nuclear energy, healthcare, oil and gas and its equipment, media and financial services, etc. Always it was, and remains, an entity in the business of satisfying a corporate bottom line so that its shareholders get healthy paydays without the risk of cancer.

GE now says there is a slowing market for its Peterborough products. Really? There are simple political economy lessons in this, their final statement to the community.

First lesson: our communities, including our trade unions, have long believed that private profit-making and profit-taking was okay as long as the workers and the community shared in the fruits of the labour of company workers. Some did question that belief just as they questioned incentives (and concessions) provided to private investors such as GE to locate, and stay located, in the community. Now misplaced trust in life lessons from private enterprise has taken a giant hit.

That leads to lesson number two: we have been told, time and time again, that the private sector can produce better results for the community than our collectively-owned public sector operations. As many communities in Canada, the United States and Mexico have learned to their chagrin, private capital locates solely where the greatest profits can be made. We now know that decisions made in a far off boardroom can spread chaos in local communities. This is not new for GE – it has a track record in this regard. For example, watch this Academy Award-winning short documentary “Deadly Deception.”

Mention could also be made of PCBs in the Hudson River where folksinger, Pete Seeger, devoted the last years of his life trying to clean up that river. Many prominent examples elsewhere could be cited as well where citizens and taxpayers had to either cope or clean up GE’s environmental legacy. There were also lawsuits and out-of-court settlements that simply amounted to a licence to pollute.

Then there is the third central lesson. Profit is created by workers at the point of production (in this case for the last 128 years at its Park Street production facility in downtown Peterborough). However, the realization of that profit comes in the marketplace. That is elementary capitalist economics. That marketplace has been extraordinarily good to GE.

But when that marketplace starts acting in strange ways, as we know it does cyclically, the “rate” of profitability tends to fall and the shareholders start screaming after returns on their investment, and CEOs start casting around for solutions to boost profits.

And this brings us to lesson number four: operations like the Peterborough plant once employed more than 6,000 workers who produced massive profits for GE which actually did get realized in the marketplace. In fact, there was so much profit realized that GE expanded to become one of the largest corporations in the world producing commodities in virtually every profitable arena in the entire world capitalist system. But GE still wasn’t finished plowing its profits into making even more profits.

Under the leadership of GE czar, Jack Welch, GE found creative ways to enhance profitability, not into creating more commodities, but in financing others as they pursued profits, and especially in a real estate bubble that produced very little new wealth but distorted the global economy. Welcome to the world of financial capitalism and GE Capital. This proved to be the way to outstanding results on the corporate bottom line. Welch was considered a genius for playing fast and loose with profits when he retired in 2001 and passed the CEO torch over to his protégé, Jeff Immelt. At one point, 42 per cent of the returns to GE investors came from its financial services. It also proved to be the way toward a global catastrophe, the ‘Great Recession’ and the financial meltdown of 2007-08.

Suddenly Welch, the 2001 hero of investors was being compared to Immelt, the 2008 goat. Under Immelt’s watch, the great global marketplace had not only been acting strangely, it had
collapsed. CEOs and their economists and political consorts have yet to figure out why. Most of us have it figured out.1

Immelt in October 2008 had to turn to Warren Buffett’s Berkshire Hathaway, Goldman Sachs (who had also been thrown a lifeline by Buffett), J.P. Morgan Chase, Vanguard, Blackstone and other big institutional investors whose assets run into the trillions of dollars to pull through. Together, these investors now own millions of shares of GE; and they care even less about commodity production (and certainly not workers or communities), unless it can reverse the downward trend in the rate of profit and increase stock prices and dividends.

(One small player of note to Canadian workers was the use of the Canada Pension Plan to take one of Immelt’s American finance capital “losers” off his hands for a mere $12-billion in 2012.)

During Immelt’s tenure in response to the crisis, GE made 380 acquisitions at a cost of $175-billion and sold off 370 assets worth a total of $400-billion. GE is now positioned for the next round of profit-taking.

So, “failure”, Jeff Immelt, entered retirement as of August 1, 2017, and turned the reins over to John Flannery, a “big mergers and acquisitions guy” (M&A) according to an analyst at RBC Capital. Immelt can lick his wounds and contemplate the price of failure, still one of the highest priced CEOs in the world, with paltry paydays of $37-million in 2014; $33-million in 2015; and $21.3-million for 2016 plus a tally estimated at $211-million as he was walking out the door on August 1. Contrast that with the local folks of Peterborough.

GE’s affiliation with Peterborough goes back many, many years. For example, during the Winnipeg General Strike of 1919, GE workers in Peterborough came off the job in sympathy with the workers of Winnipeg (as did workers in many other places in Canada prompting a Royal Commission) who were simply demanding a living wage, shorter hours and union recognition. When the strike was smashed, employers and the Conservative Robert Borden government were especially vindictive. Workers were deported and blacklisted and only those swearing loyalty oaths to their employers were allowed to return to work at GE and elsewhere. Local wounds were so deep that it is said that the Peterborough plant was the last in the GE chain in Canada to be organized into the United Electrical Workers Union (later the CAW and now UNIFOR) in the late 1940s.

General Electric has been adept at following all of the twists and turns of the restructuring capitalist economy since the end of WWII, when its employment numbers were in the hundreds of thousands of workers. Actually, it should be noted that GE wasn’t just following the economy, it was a leading advocate in developing Canada’s industrial policy of continental integration, starting with the Abbott Plan of 1947,2 a plan that saw Canada’s post-War economy develop as a branch plant and resource hinterland for United States industry. We are keenly feeling that corporate policy today.

Continental integration accelerated with the first so-called Free Trade Agreement (FTA) and later the North American Free Trade Agreement (NAFTA) which extended the corporate noose around Canada’s neck, challenging conventional wisdom that the FTA and NAFTA (or the Abbott Plan) was good for Canada and Canadians.

Now a rogue corporate element occupies the White House and has the audacity to say that our country is taking unfair advantage of American workers. Yes, American workers are being taken advantage of; but by the very same corporate forces taking advantage of Canadian (and Mexican) workers. The most extremist President in U.S. history has the gall to wrap himself in the mantle of worker ‘saviour’ while he plans their and our destitution.

Canadians have little reason to be smug. Successive federal governments have also led Canadian workers and their communities down the garden path. It will take a Herculean effort to withstand the onslaught coming at the NAFTA bargaining table and its aftermath. The supply chain of commodity production makes reversing field a very difficult and painful exercise, but we will find we have little choice. Peterborough GE is not just a symptom, but a sign of things to come, so we need to start now.

The current re-negotiation of NAFTA is going to be downright nasty. It is about corporate investor privilege at the expense of sovereignty, communities and workers in all of the countries involved. GE and its investors are well represented at the NAFTA bargaining table. GE has already anticipated the next round of corporate restructuring to resolve deepening economic crisis in favour of improved profitability rates and satisfied investors. That is bad news for communities, unions and whole countries.

The news by GE in Peterborough is just slightly ahead of the latest political and economic curve represented by so-called trade deals.

Canadians need a new economic direction and what should be the final lesson: the largest actors in the private sector can’t be trusted to help us to set a new and different course much less hold on to what we are desperately trying to hold onto.

A good start in a new direction would be to settle all the outstanding Peterborough WSIB claims for victims of GE’s past. A good start would be insisting that the bill for soil remediation around the Park Street plant be forwarded to GE for immediate payment so that the property can be used for something in the interests of the people, for instance a workers’ co-op or public utility producing solar panels, wind turbines or other useful commodities for the energy of the future.

Perhaps then, there will be good green jobs for the young of our community; and who knows, it could even be that the next Thomasina Edison, graduating from Fleming College, will put her genius and newfound education to good use serving tomorrow’s community somewhere around Park Street. •

This article was published in the Political Economy Newsletter Vol. 5, No. 9, (Sept. 2017), archive available at georgehewison.ca.

George Hewison is a communist, long-time union organizer and former officer of his union, the United Fishermen and Allied Workers Union on Canada’s west coast. He embraces political and social activism in the interests of social justice and fundamental social change.