Solidarity With Protest Movement in Morocco

Several civil society organizations have voiced their support for protests in Morocco and other North African countries facing growing state repression, resource theft and imperialist expansion. They call for respect for people’s rights and just development.

On 26 June, the first day of Eid celebrations, a popular march that was organized in the town of Hoceima, northern Morocco, was brutally repressed. The people of the Rif region decided to organize the “Eid March” in order to demand the release of their sons and daughters imprisoned in the previous few weeks and to denounce the ongoing violence and intimidation that the state is using against their resistance through a wide campaign of jailing and kidnapping of their activists and leaders. 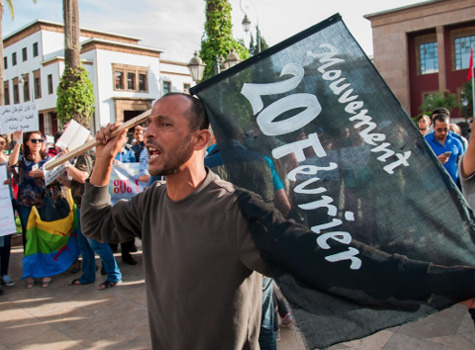 In fact, the authorities tightened their blockade of the region by closing the main roads leading to the town and it embarked on a general sweeping operation against citizens that were trying to reach Hoceima either by foot or through smaller non-paved roads and against those who were gathering in streets and squares in order to join the march. In spite of all of this, people from other neighbouring villages succeeded in organizing huge solidarity marches in order to break the suffocating blockade.

The Moroccan ruling elites use all means of repression, imprisonment, kidnapping and deeply unjust policies against the activists of social movements in the Rif region as well as intimidation and harassment against the local population in order to halt their protests which are advancing socio-economic demands. Moreover, these elites launched a vilification campaign in order to delegitimize and criminalize the popular movement that has expanded to other towns and parts of Morocco. These current protests and discontent are considered as a continuation of the popular mobilizations that the country witnessed in 2011, mobilizations led by the 20th February Movement in the context of the revolutionary process initiated by the Arab uprisings. This process is still alive and was reignited by the brutal murder of the fish vendor Mohsin Fikri, who was crushed in the most inhumane way in a garbage truck in October 2016. The people of the Rif demand that people responsible for this heinous murder be made accountable. They want to get to the whole truth around the assassination of five activists in very obscure circumstances in the context of the 20th February 2011 mobilizations, the cancellation of the decree that considers the Hoceima as a military region as well as other demands related to public amenities (schools, universities, hospitals, etc.) and infrastructure (roads) and employment for the youth.

The demands of dignity, freedom and social justice raised by the people of the Rif and other regions in Morocco have been the basis of popular and revolutionary uprisings that took place in several countries in our region leading to momentous changes, albeit with ups and downs, counter-revolutions and imperialist interventions. Our people are still fighting counter-revolution, imperialist domination, contempt, oppression, authoritarianism and the pillaging of our resources. In Tunisia, for example, the southern region of Tataouine has witnessed for a few months a significant protest movement and occupations in order to enforce the right of its citizens for decent jobs and their fair share of the rich natural resources (oil and gas) that lie under their feet.

These are all instances of the crisis caused by neoliberal policies imposed on us by international financial and trade institutions and imperialist centres, policies that are based on austerity measures, crippling public debt, the opening up of our economies to foreign capital allowing it to dominate the most lucrative sectors, non-progressive taxation in favour of the rich and multinationals, systematic corruption, land grabs, population displacements and the concentration of wealth in the hands of the few. These violent policies and practices are implemented by non-democratic and repressive regimes. As an example, Egyptian security services have harassed and arrested several activists who were opposed to the agreement entailing the sale of the Egyptian islands Tiran and Sanafir to the reactionary Saudi monarchy.

We, therefore, declare our full support for the struggles of the Rifians in Morocco, Tataouine in Tunisia and all the peoples of our region in their fight for a just social development that is based on the satisfaction of their basic needs as well as on a fair redistribution of wealth and resources. We also denounce all acts of violence and repression and we demand the release of all prisoners and detainees. We are determined to continue our support to and solidarity for efforts and endeavours of building a truly popular and radical democracy in our countries. •