Following two days of discussion on issues such as the structural and systemic causes of human movement, the impact of climate change, economic crisis and interventionist policies on migration flows and strategies for protecting and increasing the rights of migrants, refugees and their families, the following declaration was adopted by the conference.

Social movements and citizens from around the world, meeting in Tiquipaya, Bolivia, on June 20 and 21, 2017, after hearing the testimonies of migrants and refugees and collectively debating on the basis of our historic memory and the plurality of our identities, approve the following declaration, with the aim of manifesting our vision and proposals regarding the so-called migrant crisis to states and the international community. 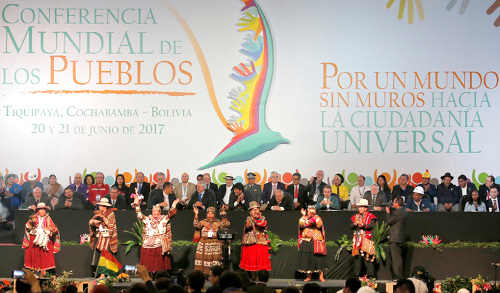 The peoples of the world are conscious of the need to continue promoting with greater force a new world order, whose characteristics are:

We have verified that the principle causes of this crisis are bellicose conflicts and military interventions, climate change and the enormous economic asymmetries that exist between states and within them. The origins of this destructive situation can be found in the dominant global order, which in its extreme hunger for profit and the appropriation of common goods generates violence, promotes inequality and destroys Mother Earth. The migrant crisis is one manifestation of the integral crisis of neoliberal globalization.

Human movement is a right that is rooted in the essential equality of human beings. However, in the majority of cases, it does not the result of a voluntary decision made by people but rather due to situations of necessity that have reached the extreme of forced migration. Along with the pain caused by being uprooted, we should add the situations of injustice, exclusion, discrimination and exploitation that people suffer in transit and in receptor countries, which go against their dignity, their elementary human rights and, in no few cases, their own lives.

The hegemonic discourse, promoted by transnational media corporations, promotes a negative vision of migrants, and hides the contribution they make to receptor countries in economic, demographic and socio-cultural terms. We view with concern the growth of neo-colonial, intolerant and xenophobic positions that go against cooperation between peoples and constitute a genuine threat to world peace. Paradoxically, these positions are promoted from the centres of global power, the same ones that are primarily responsible for structural violence, planetary inequality and climate change, to the detriment of the creditors of social and environmental debt: the poor people and countries.

That is why we are promoting, from the grassroots, the following 10-point plan of proposals to bring down walls that divide us and constructs a Universal Citizenship that enshrines the right of all to have and fully enjoy the same rights, for the well-being of humanity.

This declaration has been translated by Federico Fuentes for Green Left Weekly where it was first published.