We Need Free Speech to Fight the Right

“Free Speech or die, Portland. You got no safe space. This is America. Get out if you don’t like free speech.” Those were the chilling words of anti-Muslim terrorist Jeremy Christian at his arraignment for stabbing three people who tried to stand up to his harassment of two women of color, one of them wearing a hijab, on a light rail train in Portland, Oregon. 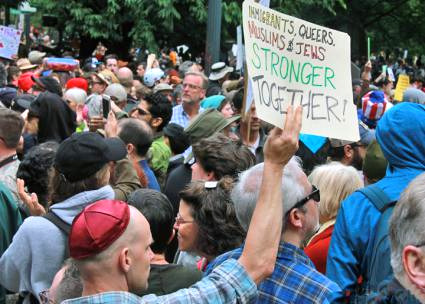 Christian was responding to the far right’s current cynical campaign in defense of what it calls “free speech” – which to the bigots means the freedom to harass, intimidate and assault oppressed people with no opposition.

In a Facebook event in support of Christian that was quickly deleted, white nationalists claimed that in killing two people and seriously injuring a third, Christian was defending his right to free speech from the men who tried to stop him from verbally assaulting two high school girls with his bigoted rant.

In a less overt call to violently protect hate speech at the alt-right’s June 4 “Trump Free Speech” rally, Kyle Chapman – also known as “Based Stickman” – encouraged members of the crowd to “protect people with conservative ideology from being systematically oppressed.”

And, of course, these right-wingers also unapologetically support the many First Amendment violations committed by police. There were a multitude of “Blue Lives Matter” flags at the right’s June 4 rally – and the right-wingers cheered when police used excessive force to shut down the Antifa counterprotest. When the rights of 300 counterprotesters were violated by police who kettled them on a city block and took pictures of their IDs, these so-called champions of “freedom” had nothing to say.

But attempts by newly forming fascist organizations to warp the concept of freedom of speech shouldn’t lead our side to abandon this important principle, which is vital to building a strong movement that can take on the racist right.

Calls from politicians to put limitations on speech, like the attempt made by Portland Mayor Ted Wheeler to get the federal government to revoke the alt-right’s permit for the June 4 rally, only serve to further embolden the right and plant the seeds for future crackdowns on the left.

Fortunately, a much more effective response to the right took place when more than 2,000 Portlanders attended various counterprotests, the largest one being the Portland Stands United Against Hate rally. The counterprotesters refused to be intimidated and used their free speech to show the far right that the vast majority of Portland won’t allow hate to go unchallenged. Mobilizations like this are the only effective option for confronting the emboldened right and their efforts to recruit larger numbers.

Wheeler’s request may have struck many progressives as a logical response, particularly after the experience of a previous right-wing rally that Christian showed up to with a baseball bat a few weeks before his double homicide that traumatized the city. In reality, however, the mayor’s action played into the hands of the far right, which is actively recruiting by positioning itself as defenders of free speech.

The federal government declined to revoke the permit, but the right was still able to use Wheeler’s request to its advantage. Portland organizers of a June 10 anti-Muslim rally announced that they would move their efforts out of Portland to Seattle “due to Mayor Wheeler’s inflammatory comments and what we feel is an incitement of violence, he has shamefully endangered every scheduled participant.”

The decision to not have another hate rally in Portland might, in reality, have been a response to the quick organization of a second Portland Stands United Against Hate event and the large numbers of people who promised to attend another counterprotest. But the bigots will use any opportunity to portray themselves as victims of perceived oppression to win new supporters.

The left should also be clear that we don’t want our blatantly undemocratic government – which gave Donald Trump the presidency despite his losing the popular vote – to have the power to dictate the terms of free speech. Restrictions on speech have historically been used to suppress oppressed minorities, workers and the left. This is clearly the intention of the new president, who during his campaign lamented over the “good old days” when protesters were treated “very, very rough. And when they protested once, you know, they would not do it again so easily.”

High-profile incidents of right-wing violence and intimidation are undoubtedly on the rise, from the Portland murders to the killing of Black army veteran Richard Collins III at the University of Maryland, to the death threats against Princeton professor Keeanga-Yamahtta Taylor. The right claims to be the protectors of freedom, yet they are terrorizing people who want to use those freedoms in their lives.

But we have to be clear that the government blocking right-wing rallies won’t stop the right’s hateful message from taking root – not as long as the underlying conditions fueling hatred and bigotry goes unaddressed.

Since the economic crisis of 2007-08, a political polarization has taken place in the U.S., pushing people to the left and to the right at the same time. The right’s answer to the crisis has been to step up scapegoating, while Donald Trump escalates the war on workers and the oppressed. The far right and Republicans are drawing closer together, as each looks to take advantage of the other’s successes to recruit.

Government crackdowns on free speech and small bands of left-wing street fighters won’t stop the right – on the contrary, they might, in fact, help the right to recruit.

Instead, we need large numbers to confront the right, expose their fraudulent claims to be an oppressed “silent majority,” and demoralize potential new supporters.

We must also focus on organizing our side to pose an alternative to the right’s scapegoating and hate as polarization continues to deepen. We’re going to need to use our right to free speech to expose the hypocrisy of the bigots – and argue for a radical alternative to the dehumanizing conditions of capitalism that created the conditions for the right to grow. •

This article was first published by Socialist Worker. Christopher Zimmerly-Beck contributed to this article.