South Africa’s biggest trade union, the National Union of Metalworkers of South Africa, held its 10th National Congress from 12-15 December 2016 in Cape Town. This statement was written on 7 December.

1. This ‘Workers’ Parliament’ could not be meeting at a more critical time for the world working class in general and the South African working class in particular. All over the world, the workers are under attack from employers who, as always, are making us, the working class, pay for their global crisis of monopoly capitalism. They are destroying jobs, cutting wages, attacking trade unions and reducing spending on essential social services. 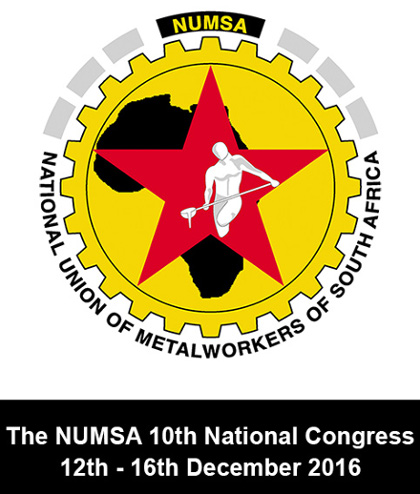 2. The foundation of South African racist capitalism is the super-exploitation, impoverishment and unemployment of, and extreme racial inequalities against, the majority black and African working class. The ongoing global crisis of the capitalist system simply worsens these already pre-existing horrible conditions of the black and African working class. Congress will be sending a clear warning that unless these are urgently attended to, the country is headed for a violent class and racial confrontation, as so many voices have warned already.

3. Jobs, especially in manufacturing, are becoming ever more precarious. Whole industries like steel are in danger of disappearing, throwing thousands more on to the streets. The shocking employment statistics released on 22 November 2016 confirm beyond any doubt that South Africa’s economy is in deep crisis. Unemployment rose to a record 27.1% in the third quarter of 2016 – up from 26.6% in the second quarter and the highest since 2003!

4. The expanded rate, which includes those who did not look for work, dropped, but only by a tiny 0.1 percentage point to 36.3%. South Africa now has the highest unemployment rate among more than 60 emerging and developed countries.

5. Of particular concern to Numsa’s members is that the manufacturing sector suffered the most job losses – 91,000. Quite apart from the human misery this level of unemployment causes, it adds up to a colossal waste of potential for the 5.8-million unemployed people to create wealth and to supply essential goods and deliver services to the poor.

6. An inevitable consequence of these levels of unemployment is that employed workers will have more unemployed family members to support from their meagre wages. The pathetic proposed R3500 minimum wage will do virtually nothing to improve this lack of income for millions of South Africans, especially in those households where nobody has a job. It also encourages employers to bully their workers into even worse levels of exploitation, using the threat of the sack to quell any resistance.

7. What makes all this even worse is the country’s white racist capitalism’s grotesque level of inequality. An international survey of CEOs’ pay by Bloomberg revealed that South African CEOs (who are still predominantly white and male) are the seventh-highest paid in the world – receiving more than those in Norway, Spain, Australia, France and Japan. These, like the six with higher-paid CEOs, are all rich countries in which the working class is far better off than in SA.

8. This shows that South Africa is now by far the most unequal society in the world. CEO’s pay exceeded that of the average person by a greater ratio than in any of the 25 countries Bloomberg measured. The income of the average CEO is 541 times more the income of an average South African, as measured by the gross domestic product per person. Only second-placed India, with a differential of 483 times comes anywhere close to SA’s.

9. The most important conclusion from these horrifying statistics on unemployment and inequality, which will be drawn by delegates to next week’s Numsa Congress, is that both are an inherent feature of the racist monopoly capitalist system, based on the super-exploitation of the African working class.

10. This crisis also makes building strong unions more vital than ever and the National Congress will be a platform for Numsa members to plot a fight-back strategy, to build a powerful, united army of workers to resist the horrendous levels of unemployment, poverty and unemployment and to fight for a living wage.

COSATU Moves to the Right

11. Delegates however will not forget that they will be meeting just two years since Numsa was expelled from the Congress of South African Trade Unions (COSATU), because of our opposition to the federation leadership’s move to the right, which saw it become a mouthpiece for an ANC/SACP government which had abandoned the Freedom Charter in favour of an unbridled neoliberal, free-market white monopoly capitalist system.

12. The COSATU leadership has colluded with the ANC neoliberal government around the national minimum wage. Numsa regards Cyril Ramaphosa’s proposal for R3500 a month as a legitimization of slavery wages, which would leave millions in poverty but safeguard the interests of the exploiting capitalist class.

13. All this has left workers even more impatient to replace the now totally discredited and ideologically bankrupt COSATU with a new anti-imperialist, socialist, democratic, independent, militant workers’ federation. Numerous new breakaway unions have been formed and we are working with them in the Steering Committee for a New Federation.

We have warmly welcomed Fawu’s historic decision to leave COSATU. The latest Numsa Central Committee agreed that we must continue to discuss with larger unions like Amcu, some other Nactu affiliates, and some COSATU affiliates who were part of ‘The Nine’ which have still to commit to the new federation.

14. The ANC is in a massive crisis, over the split around whether President Jacob Zuma should resign. Numsa delegates next week will remember that three years ago Numsa became the first to make the same demand, at its Special National Congress (SNC) in 2013. It called for “President Jacob Zuma to resign with immediate effect because of his administration’s pursuit of neoliberal policies such as the NDP, e-tolls, labour brokers, youth wage subsidy and the track record of his administration which is steeped in corruption, patronage and nepotism.”

15. The evidence for this corruption and looting of state resources was clear then and has grown over the past three years. We have been uncompromising in condemning the bribers and looters, but have always said that Zuma’s resignation will not in itself change anything fundamental. Zuma and the Gupta family are no worse than hundreds of other capitalists and state functionaries who get rich through corruption, embezzlement and crime, but they are just the most blatant, crude and, to the ruling class, most embarrassing examples.

16. “It is the whole capitalist system which is immoral and corrupt” said Numsa in its 13 September 2016 statement:

“Reports appear regularly of systematic tax evasion, money-laundering and price-fixing by big business. Millions of rands are leaving the country as investors put their cash where they will make the quickest and biggest profits, with no regard for the welfare of the people, the environment and least of all the conditions of their workers who produce the wealth in the first place. Big business is immorally sitting on more than R1.5-trillion in the banks and refusing to invest it in the economy… Capitalism is immorality and corruption, period.”

17. We shall campaign for the transformation of this trillion rand retirement industry, so that we use that money, which comes from the workers, in the interests of workers and the working class.

18. Numsa will not be joining the chorus demanding that Zuma must be replaced by Deputy President Cyril Ramaphosa, who is portrayed as a representative of clean, constitutional and honest capitalism. Numsa can never support a capitalist exploiter who is seeking to protect his own huge investments and the interests of white monopoly capital by trying to send a message to the monopoly capitalist rating agencies that the South African economy will continue to be based on the ‘free market’, and the super-exploitation of black and African labour and that this should provide solid reasons why the country should be not be down-graded.

19. We are convinced nothing can reverse the decline of the ANC/SACP/COSATU alliance.

20. The South African working class, especially the black and African working class, is crying out for revolutionary change, but sees that currently no party is capable of bringing this about. The African National Congress (ANC), Democratic Alliance (DA) and most of the other parties are basically the same, because of their continued insistence of operating within the confines of white monopoly capitalism.

21. This gives us the opportunity to build the genuine revolutionary socialist political party, rooted in the working class, which was agreed to at the union’s 2013 SNC, whose view of the degeneration of the ANC, SACP and COSATU has been vindicated by subsequent events.

22. Congress is sure to insist that we move swiftly, and more visibly, to build a democratically controlled, mass-based workers’ vanguard party, with a programme based on Marxism-Leninism, the dictatorship of the proletariat and the abolition of capitalism, so that workers have an alternative party to represent their interests.

23. Congress will call for the full implementation of the Freedom Charter‘s call for the national wealth of our country, the heritage of all South Africans, to be restored to the people, for the mineral wealth beneath the soil, the banks and monopoly industry to be transferred to the ownership of the people as a whole and for all other industry and trade to be controlled to assist the well-being of the people. Although not a specifically socialist document, it contains many calls which the new party must incorporate as transitional demands into its socialist programme, alongside our central demand for the democratic nationalization of monopoly industries, mineral wealth and the banks.

24. The Congress will also want to revisit the post 1994 South African constitution which ensured that South Africa’s white racist capitalist colonial ownership of the economy continued, with a few black faces being co-opted, to guarantee imperialist and white control of the economy and society of South Africa. The post 1994 South African constitution guarantees that white monopoly capital and the white population still own and control the land and the economy and keep the African majority at the bottom of the food chain – economically marginalized and dispossessed.

25. Next week’s National Congress will be an historic opportunity for Numsa members to launch a counter-offensive, to fight for a living minimum wage, oppose any limitation on the right of workers to strike, take forward the campaign for a new workers’ federation and proclaim the birth of the new revolutionary workers’ party.

26. Congress will debate and decide on organizational campaigns to fight head-on attempts by employer organizations such as NEASA to liquidate centralized bargaining and destroy bargaining councils.

27. As a Marxist-Leninist inspired trade union, we expect our Congress in Cape Town to emerge with active international solidarity campaigns to confront the logic of transnational companies and the imperialist agenda.

28. We remain convinced that the working class will always be victims of the ruling class unless they learn to link the fight to end white racist monopoly control of land, the economy and society and therefore end racism, and their fight for a living wage to the struggle for freedom from colonial and white monopoly capitalism and for the socialist transformation of society, nothing much will come out of their struggles!

29. We wish all Congress delegates a safe trip to and from Congress! •

Irvin Jim is General Secretary of the National Union of Metalworkers of South Africa (Numsa).