The University of Manitoba is on strike. Since 1st November, more than 1,200 faculty members took to the picket line to protest the lack of funding for education, a need for workload protection and safeguarding for fairer tenure and promotion procedures, in addition to addressing several job security issues for instructors and librarians. Author of The Capitalist University, Henry Heller is a professor of History at the University of Manitoba, he writes here of the strike and how the walkout resonates with the themes of his book.

Authors don’t often get to live out the denouement of their books. Yet that is what is happening to me as I blog. On 20 October Pluto published The Capitalist University: The Transformations of Higher Education in the United States, 1945-2016. Its last chapter deals with the development of the neoliberal university and the growing resistance to it on the part of faculty and students and other workers. Two weeks have gone by and I find myself on a picket line at the University of Manitoba on a faculty strike against the neoliberal university. As we stand vigil at the gates of the University the days are rapidly shortening and getting colder. Overhead the geese are quickly and excitedly fleeing to the south. But each morning since 1 November I find myself on the morning shift defying the university’s attempt to impose total control over the work of professors and librarians at our university. We are an important part of a rising tide of class struggle developing both inside and outside of universities across the globe against the ravages of neoliberal capitalism. 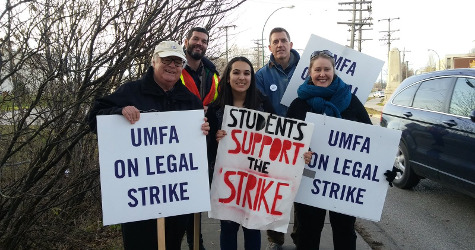 The heyday of the universities came between 1945-80 at the height of the Cold War and was marked by massive support from government including the military for universities. Universities defined their mission as directed to public service and strove to create knowledge which had both practical as well as theoretical aspects. In the humanities and social sciences a few scholars even pursued a critical knowledge which sought disinterested truth in the analysis of ideas and society. The climax of this era came in the 1960s when unprecedented student protests over civil rights, the U.S. war in Vietnam and bureaucratic domination over university life spilled over into society at large and led to challenges to the capitalist order.

But from the 1980s onward so-called academic capitalism took hold and universities not only more and more redefined their mission as serving private business and themselves becoming as far as possible profit-orientated in their mode of operation and objectives. In the light of this academic capitalism new faculty, administrative and business networks sought to promote a cognitive capitalism, creating new forms of knowledge which could be more or less immediately commodified as intellectual property.

These changes are central to the emergence of the neoliberal university marked by the decline of the humanities and social sciences, cuts in public financing, enfeeblement of faculty and student roles in governance, increases in tuition, growing student debt and a fall in the number of tenured faculty and increasing use of adjunct professors. These changes have been accompanied by dramatic increases in the number and salaries of administrators, centralization of management in the hands of presidents and boards of governors based on total quality management, preoccupation with endowments, predatory financing of growing student debt, research parks, real estate deals and globalized university ranking systems.

The influence of big business already great became overwhelming. Capping off these changes are the growth of for-profit universities like Phoenix University and the growth of mainly business-backed Massive Online Open Courses (MOOCs) which augur a decline in the need for permanent faculty and investments in fixed capital. These developments which follow from the logic of neoliberal economics which continues regnant in the operation of universities suggest the eventual extinction of the modern university and its replacement by new kinds of market-driven institutions of higher learning – a depressing prospect for most people that can bring a smile only to the lips of a University of Chicago economics professor.

But in The Capitalist University I show that these trends toward privatizing knowledge far from auguring well for capitalism inhibit its functioning and put into question its legitimacy and reflect the depth of capitalism’s crisis in which it seeks to parasitize and undermine those practices and institutions which once helped to sustain it economically and ideologically.

A conservative tendency emerged on campuses, beginning with the election of Reagan in 1980. Followed by a widespread abandonment of Marxism and depoliticization, linked to the emergence of postmodernism, the cultural turn and neoliberal economics. All three intellectual currents were marked to a greater or lesser degree by a turning away from history in a way which is reminiscent of the historical amnesia in the humanities and social sciences during the 1950s. At the same time all three saw a further opening of American academic life to cosmopolitan influence. Reinforced by the scientism and reifications of neoliberal economics these decades saw the step-by-step offensive of academic and cognitive capitalism and reorganization of the universities into neoliberal institutions. Seemingly in isolation, Marxist literary critic and philosopher Fredric Jameson towered above American scholarship as the interpreter of this dark period.

The onset of financial and economic crisis in 2008 brought with it widespread revival of interest in Marxism, the growth of union militancy on campus and the revival of political movements like Occupy, Black Lives Matter, Boycott, Divestment and Sanctions (BDS) and the Bernie Sanders primary election campaign in which students played leading roles. As in the 1960s, universities proved to be springboards to campaigns aimed at the transformation of American society. Moreover, as key sites of training, research and economic development, universities have become central locations within the structures of contemporary capitalism for which knowledge industries closely inter-connected to universities are the leading edge. The labour force within academic institutions and these enterprises including most teachers and researchers are of course already made up of wage workers who are already involved in productive, i.e. profitable labour or soon will be. Tenured faculty themselves are losing control of their work. In the face of these currents imposed from above the obvious rejoinder is struggle from below which in the form of the development of unions is only in its early stages. Knowledge workers, who by definition have high levels of skill, work at strategic productive locations and need to cooperate with one another in an increasingly dependent work process, are in a position to struggle effectively against academic capitalism.

Driven by the need for revenue and for reasons of prestige, universities have become deeply enmeshed in seeking intellectual property rights or monopolistic control of patents, inventions, copyrights and even trademarks. The number of patents applied for by universities has multiplied from a few score in the 1970s to over 5000 at the turn of the millennium. In an early phase of capitalism such rights undoubtedly helped innovation. Today, the dominant economic view is that protection of such intellectual property rights is key to economic innovation. Indeed, the contention is that the privatization of new knowledge in this way is creating new links on a national and global level with private industry. The economic progress of the recent past was due not to intellectual property rights but was the fruit of earlier public investment in science and technology, rather than facilitating the spread and application of knowledge such claims are creating an atmosphere of exclusivity and secrecy; litigation is becoming more important than creativity and the spread of intellectual property rights will obstruct future progress by promoting fragmentation of information, unnecessary duplication of effort, secrecy and lawsuits. Historically science has been a collaborative process in which large numbers of individuals contribute a part to a cumulative and collective process. This ethos is at antipodes to the neoliberal system of intellectual property which depends on a single agent claiming credit for the entire process.

This returns us to the fundamental questions raised by the students in the Free Speech Movement at Berkeley fifty years ago. While university administrators, politicians, businessmen and neoliberal economists seek to turn knowledge into exchange value, it proves difficult to do so. Indeed, the creation and dissemination of knowledge is being held captive by the fetters of academic capitalism. The incredible accumulation of academic knowledge begs to be set free as a use-value as part of a general intellect or mass democratic consciousness which almost certainly will assume political and social control over society. At the same time, the continuing attack on the idea that the universities should serve the public good and the undermining of the place of the humanities and social sciences in universities is among other factors helping to undermine the political legitimacy of capitalism.

Right now faculty at the University of Manitoba are holding firm on the picket lines. Talks with management continue. To settle this strike we are demanding minimal protection against arbitrary workload increases, fair assessment practices and job security. Yet as I walk the line in the bitter cold talking with chemists, social workers, sociologists, accounting professors it occurs to me that we are in the end the university and that management is in the end the product of an ongoing usurpation of both labour and knowledge. Next week I will lecture on this in an improvised teach-in on the picket line. Learning must go on. •

Henry Heller is a Professor of History at the University of Manitoba, Canada. He is the author of The Birth of Capitalism: A 21st Century Perspective (Pluto Press, 2011), The Cold War and the New Imperialism: A Global History, 1945-2005 (Monthly Review Press, 2006) and The Bourgeois Revolution in France (Berghahn Books, 2006).