From a Townhall Presentation on the Trans-Pacific Partnership on October 22 by Bruce Allen, organized by the Niagara Regional Labour Council, for which Bruce is Vice-President.

I want to take this opportunity to present a short overview of local activity in Niagara in response to the TPP. It will emphasize in particular the leading role which the Niagara Regional Labour Council (NRLC) has played in this activity. 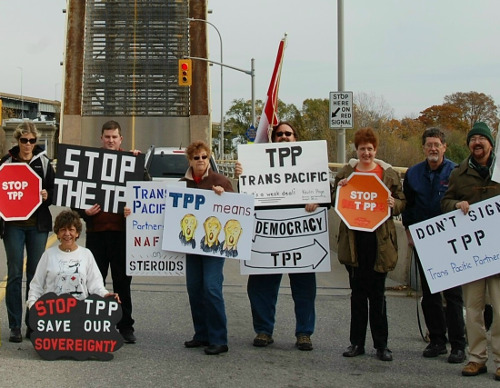 The first actions to show opposition to the TPP were initiated last autumn. They essentially came from outside of the labour movement. They were initiated largely by former members of the Occupy group which existed in Niagara in the wake of the global economic meltdown of 2008. Their efforts were supported by members of the Council of Canadians, some local labour leaders and other concerned citizens. These actions consisted of information pickets about the TPP staged on consecutive Saturdays at the Homer Bridge crossing the Welland Canal next to Lock 2.

They were followed by a public forum organized last November 27 by the Niagara Workers Activist Group which is now collaborating with the NRLC in supporting the Fight for $15 and Fairness. The event was well attended. It featured presentations by Bill Gillespie of the Trade Justice Network and Unifor economist Jim Stanford.

Ramping Up the Campaign

The start of 2016 saw the NRLC send a letter to the leadership of the Canadian Labour Congress (CLC) calling on the CLC to organize a mass march on Ottawa in opposition to the TPP. Shortly afterward, leaders of the NRLC made a series of successful presentations to city councils in Niagara Falls, St. Catharines, Thorold, Welland, Port Colborne and Fort Erie. These presentations met with little opposition to our arguments against the TPP and resulted in all six city councils adopting motions opposing the TPP in its present form and sending letters to the Federal Trade Minister expressing their opposition. Media coverage was limited but positive especially in Niagara Falls.

In addition to these initiatives a letter was sent to the editor of the St. Catharines Standard detailing how the TPP must be seen an integral to Capital’s offensive against Labour putting forward a perspective inspired by consumer protection activist Ralph Nader who has called the TPP “the most brazen corporate power grab in American history.”

There have also been lobbies by NRLC Executive members of local Liberal MPs Chris Bittle and Vance Badaway. Neither of these MPs took a clear position on the TPP one way or the other particularly with respect to whether the Federal Government would ratify it.

The point of all this is simple. Niagara, thanks largely to efforts by and associated with the NRLC, has seen sustained work to build ongoing opposition to the TPP. Furthermore insofar as this is the case and we are assembled here today at a NRLC event it can reasonably be asserted that we have set an example that could and should be replicated across the country.

Faced as we are with a majority government in Ottawa led by a political party, the Liberal Party, with a long and very consistent track record of backing and implementing anti-worker trade agreements nothing less, if not much more, is going to be necessary to stop this government from ratifying the TPP. Stated otherwise, we must mobilize politically. We must put optimal pressure on the federal government if we want to see the TPP go the way of the Free Trade Agreement of the Americas which we mobilized against in Quebec City in 2001 and which died due to the strength of opposition to it in Latin America and of the quietly abandoned Multilateral Agreement on Investment which also encountered strong popular opposition.