“No CCF Government will rest content until
it has eradicated capitalism and put into
operation the full programme of socialized
planning which will lead to the establishment
in Canada of the Co-operative Commonwealth.”

The years of compromise and moderation were about to bear fruit in 2015. In 1933 the Co-operative Commonwealth Federation (CCF) proudly declared itself a socialist party dedicated to the eradication of capitalism and building a socialist economy and society. Voices of moderation within the party appealed to the party’s rank-and-file to be more pragmatic, less ideologically pure. A sustained attack by the capitalist press joined the chorus from outside the party. These voices became more urgent as the CCF achieved some electoral success, most importantly the 1944 victory in
Saskatchewan. The capitalist press now combined the usual nasty red-baiting with sage advice to the CCF about not being too dangerously radical. The road to victory in Ottawa required a softening of the party’s language, a moderation of its hard program, and friendly assurances to business to overcome capital’s fears. M. J. Coldwell, J. S. Wordsworth’s successor as national leader, bitterly complained the Regina Manifesto was “a millstone around the neck of the party.” It had to go. In 1956 it was replaced by the moderate Winnipeg Declaration. 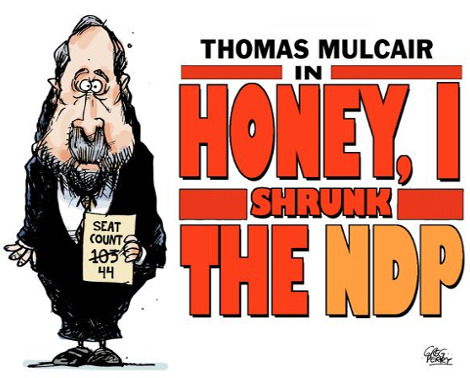 As the years went by, the language of the party, and its programs, became increasingly moderate: no more talk of socialism, public ownership of resources and industry, nationalization. Each failure to advance electorally was met with yet more moderation… and so it went. This pact with Satan progressed as the party traded pieces of its socialist soul for the elusive promise of electoral victory. In the end all that was left was a commitment to moderate social democracy, the welfare state, and the use of a cautiously interventionist state to win incremental advances in social and economic justice. In private, and at party conventions, the word socialism was still uttered from time to time, usually to defend the strategy of socialism by stealth from the party’s left.

The final surrender occurred in response to the triumph of global neoliberalism in the 1990s characterized by a successful assault on the welfare state and activist governments. NDP premiers Bob Rae of Ontario, Roy Romanow of Saskatchewan, and Mike Harcourt of BC, and federal
leader Audrey McLaughlin, abandoned social democracy and embraced neoliberalism. From then on NDP election campaigns jettisoned basic social democratic program proposals while critically supporting neoliberalism, arguing it should not be so harsh, but characterized by a human face and a helping hand. The inner circle insisted the party retained social democracy as an ultimate goal, pointing to the party’s constitution promising the application of “democratic socialist principles to government.”

This final compromise seemed to bear tangible electoral fruit after Jack Layton became leader, leading the party in four elections (2004, 2006, 2008, 2011). Each election saw a significant gain in seats culminating in the outstanding showing in 2011, 103 seats with 31 per cent of the vote. As Official Opposition the NDP was one election away from federal power. The long cherished hope of replacing the Liberals was finally realized.

Layton’s flirtation with neoliberalism was viewed by the party establishment as a pragmatic electoral tactic. No one doubted Layton’s core commitment to moderate social democracy. In creating the conditions for the NDP sweep of Quebec in 2011 (59 of 75 seats), Layton’s political savvy combined with historical circumstances. Layton recruited Tom Mulcair to the NDP, made him his Quebec lieutenant, convinced Mulcair could assist in making gains in Quebec, long a wasteland for the party. This was a controversial choice since Mulcair, though a party member of the federal NDP in Quebec, served in the cabinet of Jean Charest’s Liberal government (1994-2007), where he established a reputation of being on the right on economic policy: a committed fiscal conservative who embraced the core economic ideology of neoliberalism. Mulcair made history as the first NDP MP elected and re-elected in Quebec, winning the 2007 by-election in Outremount, long a Liberal bastion, winning re-election in 2008. He was named co-deputy leader by Layton. Mulcair’s political and organizational skills, Layton’s charismatic charm, the NDP’s Sherbrooke Declaration (a referendum on sovereignty required 50 per cent plus 1), the collapse of the Liberals over the Sponsorship Scandal, and the loathing of Stephen Harper across Quebec, combined to bring about the Orange Crush in 2011.

But federal power was a possibility built on a foundation of illusion. The NDP’s dramatic sweep of Quebec was not reflected in significant gains in the other regions: 15 of 92 seats in the West; 22 of 106 in Ontario; 6 of 32 in Atlantic Canada; 1 of 3 in the North. To win power the NDP had to consolidate its support in Quebec while persuading voters in other regions it was time to give the party the mantle of power. A daunting task. Layton might have been up for the challenge, but his death in August 2011 left the party leaderless at the most important conjuncture of electoral forces in its history.

The outcome of the leadership contest was the final element in a total retreat from social democracy, even as a core belief hidden from public view. Tom Mulcair won the leadership narrowly (57 to 43%) after a divisive campaign against the established moderate social democratic leadership core, led by Ed Broadbent and Brian Topp, Mulcair’s rival and Layton’s chief of staff. They argued Mulcair was not a social democrat and the NDP’s core values would disappear under his leadership. But the tantalizing dream of imminent power was too much for the party. Enough delegates were convinced Mulcair could secure the Quebec seats and go on to win power. Mulcair put his autocratic stamp on the party, including amending the constitution to eliminate the party’s commitment to apply “democratic socialist principles to government.” Mulcair was convinced the NDP must transform into a mature, responsible, and non-ideological government in waiting. Above all it had to convey the image of a party able to manage the economy with prudence.

When Harper called the 2015 election, polls revealed that two in three voters wanted change, i.e., Harper’s defeat. Voters appeared prepared to vote strategically en masse for the party best able to achieve change. At first the NDP was the obvious contender, as the Official Opposition with early polls recording a tie between the three parties. The odd poll showed the NDP ticking ahead of the Liberals. Then the Mulcair campaign imploded. Campaigning on the slogan “ready for change,” Mulcair presented a cautious plan for change: balanced budgets and no new taxes on the wealthy were the first priorities, while all the good social programs promised would only be realized over years of careful spending and balanced budgets. Trudeau’s Liberals pounced with the slogan “real change,” promising deficit spending immediately upon election to renew infrastructure and enhance program spending. The rest is a sad chapter in NDP history as Mulcair stumbled to a third place finish.

Mulcair’s apologists insist his principled stand against the proposed Tory ban on women wearing the niqab during citizenship oaths began his decline. This is not what hurt Mulcair, since Trudeau took the same position. Mulcair’s problem was that a number of Quebec NDP MPs and candidates publicly equivocated on the issue, creating a controversy with legs in Quebec and across Canada. The public divisions hurt the party. But the niqab was a side issue. The real issue was the Liberal party had risen from the ashes of defeat to seize the mantle of the social democratic option in the election, promising big changes now.

Mulcair paid the price for the party’s sins and his role in the final temptation. The April 2016 federal NDP convention ousted him from the leadership in a 48 to 52 per cent vote, uncannily reflecting a reversal of the margin of his leadership victory. A coalition of the core social democratic establishment, which had resisted his leadership, joined ranks with labour, the left, and Alberta delegates to end his career. He had promised victory and failed. The party was deeply embarrassed at being so badly outflanked on the left by the Liberals. Alberta’s delegates were angry over his refusal to enthusiastically support new pipelines and his willingness to accept the green Leap Manifesto as a basis for internal debate on the party’s renewal.

Wither the post-Mulcair NDP? What was left of the party’s credibility as an agent of change toward a socialist and green economy and society is in tatters. Even if the Leap Manifesto is adopted, either it will be watered down to platitudes or suffer the same fate as the Regina Manifesto. Already the right of the party has called it political madness and has been dutifully joined by the capitalist press, declaiming the NDP is again on a left-wing path to suicide. Alberta Premier Rachel Notley, in an echo of Coldwell, has made it clear that even talking about the manifesto is a millstone around the neck of her government.

Thanks to the Mulcair episode, the NDP has earned a place in the dustbin of history, but is unlikely to go there willingly. It will need a push from the growing left outside the party. •