A wedge is being quickly driven through Pretoria’s political elite, splitting even those who worked closely in the murky 1980s Durban spy scene during the fight against apartheid. Amongst the victims are vast numbers of poor people beginning to bear the brunt of the diverse shakeouts in the ongoing confrontation now underway between the country’s two most powerful 21st century politicians: President Jacob Zuma and his predecessor Thabo Mbeki. That battle began in 2005, when Mbeki fired then-Deputy President Zuma following a corruption conviction against a long-time Zuma associate. 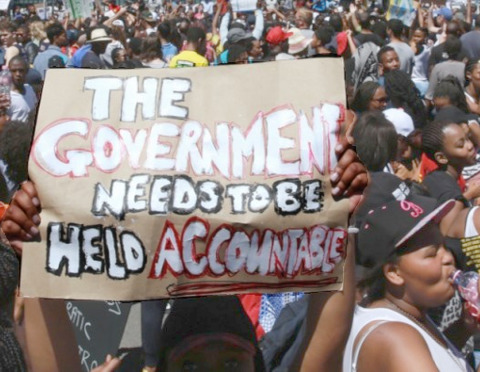 The revival of their duel comes at a very tense time in South Africa. Student, worker and community protests intensified last month after the December-January summer break. Repeated currency crashes left a 30 per cent decline in value over the past year, prompting the country’s financiers and upper-middle class commentariat to universally applaud Finance Minister Pravin Gordhan for maintaining low-grade austerity. A ‘junk’ label by international credit rating agencies, one which appears imminent and will lead to faster capital flight, remains an economic threat to this faction.

Splits Emerge in the Ruling Party

Gordhan was himself under growing political threat, as parliamentary Budget Speech preparations were interrupted by allegations he once set up a ‘rogue unit’ during the time he ran the tax agency to spy on Zuma. The ruling party appears split down the middle with durable loyalty to Zuma balanced against fear that Gordhan’s misfortunes will reverberate chaotically across the sickly economy.

To make matters even muddier, Zuma – formerly head of the African National Congress (ANC) spy unit during the liberation struggle when Gordhan was amongst his most loyal cohort in Durban – was defended in court last week against allegations against his allied spies within state security. In April 2009, just before being elected president, Zuma was preparing to be charged for 783 counts of corruption. However, his spooks foiled the prosecution by releasing transcripts of tapped phone calls between Mbeki’s main crime investigator, Leonard McCarthy, and Bulelani Ngcuka, who was a former prosecutor and the husband of Mbeki’s then Deputy President.

Though it is unclear how much Mbeki knew and endorsed, the two apparently arranged the timing of earlier attacks on Zuma to coincide with Mbeki’s ambition to serve a third term as ANC leader in late 2007. Mbeki’s failure to win support for that bid (Zuma replaced him in a decisive election) led to Mbeki’s sacking as state president by September 2008, nine months before his term was due to end. The firing was done in a fit of collective rage by the ANC National Executive just after a Durban judge affirmed that Zuma was being victimized in a political conspiracy.

The main conspirator, McCarthy, was quickly moved in 2008 – without any apparent due diligence investigation at the time – from Pretoria to Washington, to become World Bank Vice President: Integrity (sic), with the assistance of Mbeki ally, Finance Minister Trevor Manuel. As McCarthy put it, he needed a makeover to appear ‘squeaky clean.’ He wasn’t – a fact that we are continually reminded of – though the World Bank continues to employ McCarthy on sensitive investigations.

Meanwhile in South Africa, corruption was spreading like wildfire. In one futile effort to douse an obvious source (illegal cigarette smuggling) local tax authorities ran foul of Zuma’s spies as well his son Edward in 2011. Those investigations apparently generated the recent attack on Gordhan, who was the chief tax commissioner before becoming finance minister initially in 2009.

The unprecedented contagion of what Zuma called ‘gossip and rumour’ around his inner circle threatens the internal stability of the Pretoria regime. The loyalty of many key individuals is being tested. Indeed the ANC’s volatility was amplified two weeks prior to Gordhan’s Budget Speech. Before delivering his February 11th State of the Nation Address, Zuma himself finally agreed to repay some of the $16-million in state subsidies that were spent on upgrading Nkandla, his rural palace. This about-turn occurred after Zuma compelled ANC parliamentarians to support him when he refused to ‘pay back the money!’ as opposition politicians long demanded.

Austerity at the Pleasure of SA’s Creditors

While society tried to steady its political feet on the SA Titanic, the economic ship also continued to list dangerously as world financial markets roiled the currency and ever-worsening GDP statistics fueled capital flight. In spite of bending over backwards to meet financial markets’ demands for a lower budget deficit (the financial minister promised it will be just 2.4% of GDP by 2018, down from 3.8%), Gordhan was pummeled by an immediate 3.2 per cent currency collapse in the minutes after speaking to parliament.

Yet he had done what the financiers demanded: increased the austerity begun a year earlier by the prior finance minister Nhlanhla Nene, who was fired in a farcical musical chairs operation in December that led to Gordhan’s return. Though Gordhan was once a leftist, his new budget provides just a 3.5 per cent nominal increase to foster care providers (who play such a vital role given the catastrophic AIDS orphan rate) and a 6.1 per cent rise for mothers who are Child Support Grant recipients.

These poor families face double-digit inflation this year thanks to food, electricity and transport hikes. Gordhan’s ‘real’ (after-inflation) cuts by several percent to welfare grants will lower the incomes of 16.5 million recipients (out of the country’s population of 55 million). They will struggle to find more holes in their frayed belts to tighten them up, given that 63 per cent of South Africans – mostly women – already live below the poverty line.

Worse is to come, with South Africa’s foreign debt doubling to $145-billion since 2009 and debt/GDP levels at mid-1980s levels. As a result of that worsening vulnerability, the men who really yank Gordhan’s chain work for Standard&Poors, Fitch and Moodys credit rating agencies, and financiers such as New York-based Goldman Sachs. The latter bank helped raid the South African currency on January 11, sending it down 9 per cent to R17.99/$ in just 13 minutes of flash-crash speculation, shortly after telling its traders that the rand’s decline is the bank’s second most aggressive bet for 2016 (after the dollar’s rise).

The dire financial situation is far more complicated than mere ill-will. It is useful to recall that back in 2009, when IMF managing director Dominique Strauss-Kahn advocated deficit spending to save world capitalism from implosion, Moody’s actually upgraded Gordhan after his soaring 7.3 per cent deficit/GDP rise that year. The agency also raised South Africa’s credit rating from BBB+ to A-. (With similar wild abandon, Moody’s also rated Lehman Brothers as ‘investment grade’ just days before it crashed.)

Whimsical though they are, these agencies have at least put pressure on Gordhan to throw cold water on Zuma’s $100-billion nuclear energy dreams, notwithstanding intense pressure to buy reactors from Moscow and Beijing. And to Gordhan’s credit, he dodged that round of Russian Roulette by kicking the bucket over to Energy Minister Tina Joemat-Pettersson to do “preparatory work for investment in nuclear power.”

More objectionably, Gordhan’s budget included a substantial $40-million increase in funds for the notorious Public Order Policing (POP) unit – the unpunished Marikana Massacre hit-men who joked about defective muti while planting weapons on their victims – instead of defunding the POP and replacing it with skilled peace-broking units. On the other hand, Gordhan slashed $500-million in overall spending on defence, public order and safety services from the 2018 spending projections made by his predecessor.

You Can’t Be Neutral on a Corrupt, Fossil Fuel-Filled Train

But it was when Gordhan bragged of the state’s most active spending that leaders of the residential community in Durban’s seaside Bluff neighourhood (where I have lived for many years) grew furious. The highlight of Budget Day (for me) was reviewing the carnage with the South Durban Community Environmental Alliance in a long strategy session two hours after Gordhan finished speaking. In the basement of a shabby community hall that Gordhan himself once frequented when he was a Durban activist, two dozen hardened activists of all races, classes, genders and ages mulled over his generosity toward the parastatal corporation Transnet and other behemoths within the local port-petrochemical complex – the activists’ sworn enemies.

Gordhan would not be the first politician accused of pandering to the construction mafia (many have turned a blind eye to repeated collusion and overpricing here in Durban). The current outrage is Transnet’s racist rerouting of the oft-exploding pipeline that doubles petrol-pumping capacity to Johannesburg from the Engen and Shell/BP plants at Africa’s largest refining complex, sandwiching the Indian suburb of Merebank. The Settlers Primary School there has an asthma rate that was not long ago measured the world’s highest at 52 per cent. Last month’s cost estimate revision, originally priced by Transnet at around $400-million, is now nearly $2-billion.

Here in South Durban, we worry that the Baltic Dry Index – which measures shipping capacity – is now at its lowest in history (around 300 after a 2008 peak of 12 000). And with demand having crashed, fossil fuel prices have also hit the floor, casting a dark spell over Gordhan’s brag that “work has begun on a new gas terminal and oil and ship repair facilities at Durban.”

Ironically perhaps, this sentence came just three lines after Gordhan praised the Paris UN Summit’s (highly dubious) commitment to fighting climate change. He continued, “We need to accelerate infrastructure investment in the period ahead. So we must broaden the range and scope of our co-funding partnerships with private sector investors.”

Worst of all, Gordhan violated both climate and economic commonsense by bragging about Transnet’s financing of the top priority Presidential Infrastructure Coordinating Commission project: the rail-to-ship transfer of 18 billion tonnes of coal in coming decades dragged over mountains new heavy-duty railroads. The Waterburg-Richards Bay rail line – also costing upwards of $20-billion – may have looked profitable in 2008 with coal at $170/tonne, but now the price is $50/tonne. Yet the project trundles on, fertilising the northern areas of the country – including an area not far from Nkandla – with white elephant manure.

Further south in Durban, Toyota boss Johan van Zyl (who own’s Africa’s largest plant) complained of frustrating delays in getting $7-billion Dig Out Port up and running back in 2012: “If return on investment is the line of thinking we may never see the infrastructure.” Amidst rumours of a two-year Dig Out Port delay last December, Durban Chamber of Commerce and Industry president Zeph Ndlovu insisted on adding this biggest single elephant to the herd: “We have to press ahead, and if we are to unseat our competitors up north, we can’t win this battle if we pull back every now and then and look at accounting principles.”

Whether Gordhan goes ahead with reducing the state payroll by tens of thousands of public servants (as he promised the ratings agencies), or continues his nudge-nudge-wink-wink toward corporations’ $20-billion in annual Illicit Financial Flows, it’s in his coddling of accounting-challenged Durban cronies and the crack-down on welfare grant recipients that Gordhan has most decisively intervened in South Africa’s world-leading class struggle.

The tearing of the social fabric by one faction of the ruling party, with the backing by the country’s core bourgeois interests and petit-bourgeois cheerleaders, makes the overall split between Gordhan’s technocrats and Zuma’s populists all the less appealing. Some might be tempted to hope that both factions succeed – in ripping each other’s power bases to shreds. •