Up until the late fall of 2014, Ontario Premier Kathleen Wynne and her Ministers vehemently denied, on the record, that they would sell Hydro One. Then on March 10, 2015 when it was leaked that the Liberals were going to sell Hydro One, Premier Wynne went on the record and said “Whatever we do, we are going to control prices. We are going to make sure that the regulatory regimes that will protect people in this province stay in place.” Soon after, in June 2015, in complete contradiction to that statement, Premier Wynne removed all regulatory public protection in Bill 91. The Ombudsman and Auditor general were removed as were, caps on Executive salaries, the sunshine list, freedom of information and all public accountability. 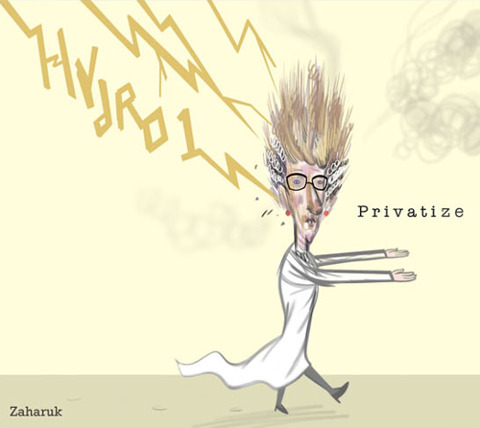 Premier Wynne has said that the public ‘will be protected from higher rates by regulation by the Ontario Energy Board.’ That is laughable considering the more than tripling of rates that has already occurred under the partial privatization of generation and deregulation of the entire Hydro industry in Ontario. Where has privatization lead to lower rates anywhere in the world? The record of privatization and increased rates is dismal everywhere.

When we elect leaders we expect them to be professional, credible and to act in the public interest. When our leaders enact legislation, we expect the announcements and communication from the government to be honest and credible. The communication and announcements surrounding the sale of Hydro One has been anything but. They sound like some kind of MBA, financial sector doublespeak. They never use the word ‘privatization’.

Premier Wynne’s government has said that they are on target “through the broadening of ownership of Hydro One.” What does that mean? Hydro One is already owned by every man, woman and child in this province. The fact is that selling 60 per cent to a few individual investors is actually shrinking ownership.

Premier Wynne is on the record as saying that she’s “unlocking billions” by the “asset recycling” (of Hydro One) to “invest in transit infrastructure.” The fact is, she is “locking in” billions for private investors and locking out revenue of approximately $500-million a year for the entire future history of the province of Ontario. Wynne has also said that Ontario will “retain 40 per cent ownership,” making it largest single shareholder. But 40 per cent will not mean a majority share or majority control. It will take the private owners of Hydro One about two seconds to join together as one voting block of 60 per cent.

It’s a permanent transfer of public wealth to the private few, permanently increasing inequality. It’s not unlike those hucksters on TV promising ‘cash now for your annuity’ or ‘cash now for your old gold and jewelry.’ You get a lump sum now, but nothing for the rest of your life. New transit will last 30 to 40 years and then needs to be rebuilt again. What do you sell then? Selling Hydro One is like eating your seed grain.

Premier Wynne said that ‘this is not like the Harris government’s sale.’ Her advisor Ed Clark has said that, ‘Private sector discipline and efficiencies will lead to lower rates.’ That is exactly the same thing that former Premiers Mike Harris and Ernie Eves said. Look at what’s happened to electricity rates since then. We don’t need the private sector ‘discipline’ and increased ‘efficiencies’ like Enron, World Com, Corel and Nortel exhibited and how about the Lehman Brothers, Fannie May and Freddie Mac, AIG and the multitude of banks and investment houses whose greed caused the biggest recession since the great depression? Kathleen Wynne’s announcements for the sale of Hydro One invite ridicule.

What About Climate Change?

To add to all this, the world’s climate is in big trouble. Governments absolutely need to hold the levers of power on electrical utilities to institute real conservation policies and allow for the kind of planning that only the public sector – not private sector companies, competing to maximize their individual profits (and not in the habit of selling less product) – can do.

It’s important to note that before deregulation started in 1999, Ontario had 94 years of at-cost, non-profit public power. Profits were given out to businesses and ratepayers in the form of low and stable rates. Public Power wasn’t perfect but Ontario’s economy was much better
under that system than the mess we now have and instead of building on its strengths, Wynne is catering to the banks and individual investors whose mouths are watering at these new opportunities for further profiteering.

During the recent by-election in Whitby-Oshawa, Premier Wynne took to the airwaves saying: “When anyone promises you cheaper electricity, they’re really promising to burn coal again.” What utter nonsense, absolutely no one is talking about going back to coal. The main reason for the lower rates in the past was a non-profit system. 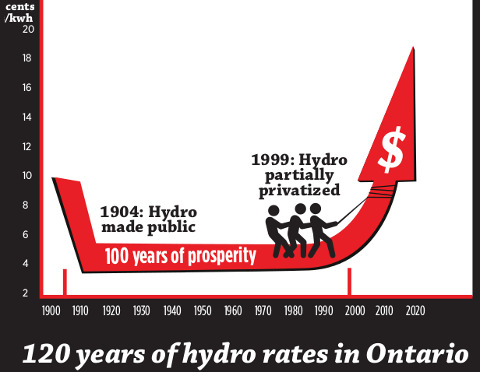 We stopped the sale of Hydro One last time in 2002 with a province wide campaign and won the court case in April of that year, proving that the Government did not have the right to sell Hydro One. Ernie Eves marched right back into the legislature and in June 2002, passed Bill 58, giving the government the “Right” to sell Hydro One. He didn’t sell it because even a Toronto Star poll showed that 91 per cent of the people were opposed. It is this Tory legislation that Liberal Premier Wynne is now using to sell Hydro One.

Premier Wynne’s sale of Hydro One is not just for one lifetime. This sale will leave all future generations of Ontarians in a much worse financial situation, just to balance the books for the next election. Not a very credible and responsible thing to do. Nor is it just about one vital public asset. It is also very much about a larger conflict over whether hospitals, schools, universities, housing and transit should be addressing social needs and equality or concentrating more wealth in the hands of a few.

The cynicism of criticizing big business and promising to protect the public interest at election time, then revealing the real agenda once in office is part of what has led to such turmoil south of the border in the Republican and Democratic Parties. People will only stand for this kind of dishonest, manipulative politics for so long. It’s long past time for the palpable frustrations and anger to be expressed within Canada. The key is to mobilize that disenchantment constructively. •