On Wednesday, February 17, a mass delegation of members and supporters of the Ontario Coalition Against Poverty (OCAP) marched to Toronto City Hall. We brought with us copies of a report we had put together called Out in the Cold: The Crisis in Toronto’s Shelter System.
The City Council was putting the finishing touches to a municipal budget tailored to the needs of investors, developers and a well resourced police force. We entered the Council Chambers and interrupted their deliberations to deliver the report as many of them scrambled for the exits. 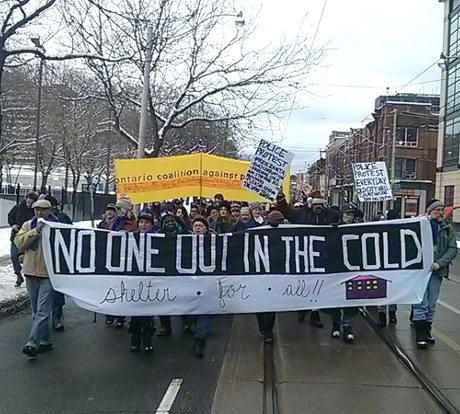 The Out in the Cold report, was our attempt to show just how severe the crisis within the shelter system has become. Shelter use has grown by 11 per cent over the last four years and there is no indication that this trend is likely to reverse. This situation arises from the accumulating impacts of an austerity agenda that has reduced the adequacy of income support programs to the point where many people find it impossible to eat properly and retain their housing. At the same time, this City is in the midst of a frenzied drive to create an oversupply of upscale housing that drives up rents and reduces affordable housing stock. Large scale homelessness is the predictable and inevitable end result.

The regime at City Hall that is working to further this twin agenda of austerity and redevelopment is deeply reluctant to adequately respond to the shelter needs of the homeless population that their work is creating. In tough times, people facing destitution will tend to move into the central areas of the major urban centres. The municipal administration is anxious to ensure that Toronto’s shelters remain forbidding places that are hard to access and even harder to tolerate. For this reason, the track record has been to concede as little as possible to community pressure and to keep the shelters crowded and uninviting.

During the week of January 18, OCAP organized visits to shelter facilities to survey users, staff and volunteers. We deliberately focused our efforts on the interfaith ‘Out of the Colds’ and warming centres that function as a de facto back up to the main system. We calculated that we could learn a great deal by taking a snapshot of the conditions in these places. What we found was shocking. The City’s policy of keeping shelter occupancy at a maximum level of 90 per cent is being systematically disregarded. 81 per cent of those we surveyed told us that had been denied a shelter bed because the shelters were full. 55 per cent had been denied a spot in the Out of the Colds for the same reason. The system is bursting at the seams and the tensions that this produces are hardly surprising. 55 per cent of those surveyed had witnessed physical or sexual violence in a shelter and 19 per cent had experienced such things personally.

The Out of the Colds are being run by people who are doing all they can to meet needs that are overwhelming them. Mats are put down on church basement floors, sometimes only inches apart. Often there are no showers and inadequate numbers of sinks and toilets. I visited one place myself that had two toilets for seventy people. Ventilation is also often very poor. When the tensions that such a situation creates lead to conflicts, police are called and people are often barred from shelters.

We happened to conduct our survey during a week when the weather was relatively mild. During an extreme cold weather alert shortly afterwards, one of our members visited a warming centre just before the 6.00 AM wake up. He found that they had not only run out of mats but had actually run out of floor space. People were sleeping in chairs and propped up against the walls.

Threshold Has Been Crossed

The picture that emerges from the Out in the Cold report is one of austerity taken to the point of abandonment. After the right to decent wages or income has been denied and, after the very right to housing has been withdrawn, shelter from the elements is the last and most meagre measure of state provision before someone is simply left to survive on their own as best they can, if they can. In Toronto, that threshold has been crossed and the austerity agenda has come to such a point.

OCAP is now demanding that the 90 per cent maximum occupancy policy be enforced and that available federal property, the armouries, be opened as an emergency measure. We are also calling for an end to discriminatory practices that bar people from the shelters because the overcrowded conditions produce conflicts and incidents. We demand that there be no more closing of shelter beds, especially in the central areas of the City where they are most needed. Finally, we call for the federal and provincial levels of government to respond to the housing crisis that is fueling homelessness and restore funding for social housing that has been lost to the austerity agenda.

It is absolutely essential that trade unions and social movements understand that responding to the homeless crisis is not some consideration of charity. The creation of a growing destitute population is only the sharpest expression of the attack on the broader working class. If we are really going to build a movement that defends workers’ gains, challenges the attack on public services and forces back the privatization agenda, then we must be prepared to draw lines. If our movements in this City will tolerate a situation where people are left to die on the streets or have their health destroyed and their dignity denied in overcrowded human warehouses, then it’s hard to imagine anything that would lead us to say ‘enough is enough’.

During the recent cold spell in Toronto, the Out of the Colds were under enormous pressure and, in the space of 48 hours, a thirty one year old woman and a forty one year old man died on the floors of two of these places. Mayor John Tory and those around him have cynically decided that freezing deaths on the streets are a PR problem. Their ‘solution’ is to cram people into facilities that have become crucibles of human misery and go on with the job of creating the neoliberal city as if all was well. This inhuman agenda must be exposed, challenged and defeated and we must ensure adequate shelter for the homeless as we build a movement for the right to housing for everyone. •