The Politics of Abortion and the Irish National Election

Abortion is one of the defining issues of the 2016 national Irish election, yet a vast majority of candidates have declined to give their views on the controversial subject. 331 of the 392 candidates have not declared a position, 33 candidates have stated support for keeping the 8th Amendment, and another 28 candidates have stated that they want to repeal the 8th. Labour, Sinn Féin, the Greens, Social Democrats, and a number of Left Independents have pledged to hold a referendum to remove the “right to life” 8th Amendment from the Constitution, which prevents the liberalization of the state’s abortion laws. 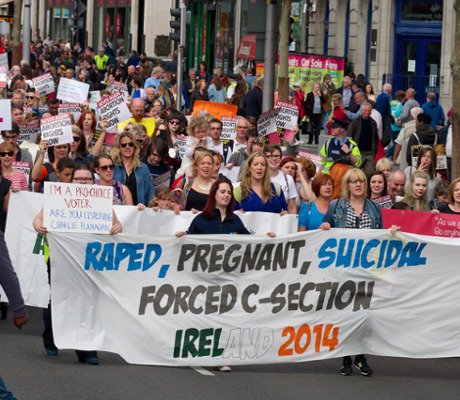 Along with the U.K., U.S., Canada, and Australia, Ireland is a liberal-democratic welfare state. Given that the idea of individual rights is the corner stone of liberal democracies, reproductive autonomy (a woman’s right to control her own body) is a clear expression of her free will. In other words, free and safe abortion on demand is a basic condition for equal participation in society. Canada, Australia, and the U.S. offer abortion without restriction as to reason.1 The U.K. offers abortion on socioeconomic grounds. In Ireland, abortion is illegal except where the woman’s life is explicitly in danger.

Historically, the role of the Irish state in the sexual and reproductive lives of its citizens has been extensive including, concerns with: homosexuality, incest, maternal and child health, unwed mothers, abortion, and with the regulation of contraception. The majority of candidates in this election are aware that abortion is a particularly divisive issue and therefore prefer to sit on the fence rather than provoke either pro-life or pro-choice voters. Weak political leadership has been the foremost factor in Ireland being the only liberal democratic welfare state unwilling to support women’s reproductive choice.

The History:
“There is only one sin in Ireland and only women can commit it”

In February 1984, the body of 15 year old schoolgirl Ann Lovett was found under a grotto in Granard, County Longford. She had died in childbirth. A year later, in what became known as the Kerry Babies case, the death of two newborns, one found buried on a beach and the other buried in a farmyard, brought into public view the reality of concealed pregnancies.

Around this time, there were two bitter and divisive referenda on women’s right to reproductive choice. In 1983, although there was no widespread demand for abortion, a few small pro-life groups on the Catholic right were successful in inserting a pro-life (8th) amendment into the Constitution. Given the fact that abortion was illegal in Ireland under the Offences against the Person Act of 1861, the constitutional amendment suggests weak political leadership more than strong oppositional forces. Attacks on pro-choice campaigners were so callous that the left effectively abandoned efforts to insert a “right of access to information” amendment about legal abortions services abroad. It, therefore, continued to be illegal to seek or provide abortion information to women living in Ireland.

In 1992, after a 14 year old girl, pregnant and suicidal as a result of rape, was prevented from leaving the country for an abortion, Ireland was again embroiled in a debate about abortion. Known as the X Case, the Supreme Court determined that the pro-life amendment of 1983 protected the life of the mother also, and where there was threat of suicide the mother’s life had to take precedence. In the 1993 referendum, the 1983 pro-life 8th amendment was amended at this time to include the right to travel abroad and to access information for purposes of abortion. However, a third proposed amendment – legalising abortion if there was a risk to the life of the mother – was rejected. It would take another twenty years before the right to an abortion if there is threat of suicide was fully legalised (Protection of Life Act, 2013).

In 2012, Dr. Savita Halappanavar was experiencing a miscarriage. She requested an abortion but was refused on legal grounds – the foetus still had a heart beat. Within a week Halappanavar miscarried but died from multiple organ failure related to septicemia. Halappanavar’s death galvanized pro-choice forces and Ireland was, once again, entangled in the abortion issue.

The Struggle:
“Condemned to a life of motherhood and homemaking”

Feminist struggles to shape the abortion debate in Ireland flows from a broader social struggle to fully separate the state from the Church. The Church’s primary interest in women’s reproductive lives has been toward preserving a vision of women’s role in the family and society that is anachronistic: a nuclear family unit where the man is the wage-earning, head-of-household and the woman is the unpaid caregiver. Rejecting abortion on any grounds, the Catholic Church condemns women, especially poor and working-class women without the means to travel abroad for abortion services, to a life, in many cases, of unwanted motherhood and unpaid domestic work.

According to a recent Central Statistics Office report Irish women are highly educated (more women than men have university degrees); there is a growing trend among women who are choosing co-habitation over marriage and those who do marry tend to marry later (in their 30s); 60% of women are in the paid labour force. Further, numerous public opinion polls conducted during the last two years have shown that 78% of Irish people support medical entitlement to abortion while almost half the population supports abortion-on-demand. About 70% believe that abortion should be decriminalized, 50% believe it is the woman’s right to choose, and almost 85% are in favour of widening the grounds for abortion.2

Since the death of Savita Halappanavar a vibrant network of Left activists have renewed the struggle for women’s right to choose. A grassroots organization called ROSA (for Reproductive rights, against Oppression, Sexism, and Austerity) has been particularly effective in attracting media attention and public support toward repealing the 8th. ROSA, established in 2013 by female members of the Irish Socialist Party, launched a republic-wide pro-choice campaign on the slogan, “Never Again” (in reference to Halappanavar’s unnecessary death). These feminist socialists are demanding a complete repeal of the 8th Amendment (right to life) and full medical entitlement to free, safe abortion services across the country. In addition, ROSA advocates for free contraception, secular and progressive sex education in schools, an end to rape culture and violence against women, and an end to spending cuts to social services and programmes critical to women’s well-being such as welfare, child care, health, education, and emergency shelters.

In addition to organizing public information sessions, leafleting, and street protests such as the annual March for Choice (which has attracted over 20,000 supporters), on 24 October 2014, the second anniversary of Halappanavar’s death, ROSA activists traveled to Northern Ireland to collect medical abortion pills and brought them back to Dublin where they publicly swallowed them. This event was widely covered in the European media. On the 24 October 2015, ROSA deployed an “abortion bus” to tour major cities. Inspired by the Canadian “abortion caravan” of the early 1970s, these feminists traveled across country informing women where and how they could obtain abortion pills. Irish law prohibits helping women to procure these pills. ROSA activists risked 14 years in prison. Nonetheless, the caravan captured the attention of media around the world and forced the issue onto the 2016 electoral agenda.

The Reality:
“Candidates are reluctant to nail their colours to the mast”

During the last decade, there has been widespread social change in Ireland. For example, in a referendum on May 2015, 62% voted YES for marriage equality. This represented a massive victory for the LGBTQ community. Additionally, the moral authority of the church has collapsed due to child sex abuse, Taum Babies, and Magdalene Laundries scandals (a network of homes for unwed mothers run by the church where mass graves of women and babies were recently discovered). Yet, political leadership has failed to keep-up with the times.

The outgoing Fine Gael Party leader and Prime Minister, Enda Kenny, has proposed a Constitutional conference to look at the situation with a view to additional amendments based on fatal foetal abnormalities rather than repealing the 8th. Further, Kenny has assured members a free vote and opposes the woman’s right to choose. In 2013, the Labour Party leader, Joan Burton, introduced a 14 year prison sentence for having, or helping someone to have an abortion and voted against motions for holding a repeal referendum in December 2014 and May 2015. In February 2015, Labour voted against allowing abortion even in cases of fatal foetal abnormalities. Despite this anti-feminist record, the Labour leader is promising a referendum if it is elected to government. 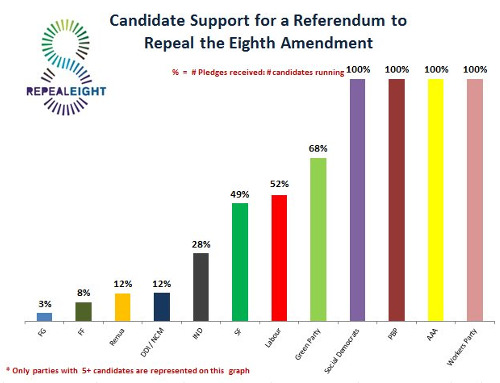 In terms of the other party leaders contesting the election, Fianna Fáil has stated that it will not initiate a referendum to repeal the 8th
and rejects a woman’s right to choose. Sinn Féin promises to hold a referendum to the repeal the 8th. However, party leader Gerry Adams has stated that he plans to amend, not repeal, the 8th amendment. The Green Party supports repeal but wants to limit abortion rights to cases of fatal foetal abnormalities, rape, incest and risk to health, but does not support the right to choose. Renua, formed by Fine Gael TDs (MPs) who left the party because of their opposition to legislating for the X case and allowing abortion even where there is ‘a real and substantial risk of loss of the woman’s life’, have been promised a free vote on the issue, however, only 12% of Renua candidates have pledged to repeal the 8th. Social Democrats support repeal. However, they propose that new legislation be developed in a convention and do not advocate the right to choose. Only Anti-Austerity Alliance-People Before Profit and the Workers’ Party have pledged to repeal the 8th amendment and advocate a woman’s right a choose.3

Conclusion:
“How the battle for a woman’s right to choose can be won”

Between 1983 and 2014, 161, 987 women travelled to England and Wales to access safe abortion services.4 The people of the Irish Republic, for the most part, have very progressive ideas about the rights and roles of women in the 21st century and do not agree that a plane ticket is the solution. Many also believe strongly that the Catholic Church has no business in the private lives of citizens.

Indeed, since the death of Savita Halappanavar, the tone and language around women’s reproductive choice suggests a significant leftward shift in political consciousness. Polling results during the last few weeks show establishment parties losing support and left-wing parties who call for repealing the 8th steadily gaining ground. There is a great sense that the 2016 election will be a major turning point in Irish politics with potential for the most socialists to be elected in the country’s history.

For many Irish people, the struggle for free, safe, universally accessible abortion is both an individual and collective one; inside and outside the state. They know that in order to win the battle for women’s right to choose, people must struggle in the streets and at the ballot box. •

Carol-Anne Hudson is a Ph.D. Candidate in Comparative Public Policy in the Department of Political Science at McMaster University in Hamilton, Ontario. Her research explores the changing political economy of the welfare state, business participation in social policy renewal, and living wages.