The Davos Blind Eye: How the Rich Eat the Poor and the World

The just-released Oxfam Davos report An Economy For the 1% which the mass media have ignored arrestingly shows that 62 individuals (388 in 2010) now own more wealth than 50 per cent of the world’s population. More shockingly, it reports from its uncontested public sources that this share of wealth by half of the world’s people has collapsed by over 40 per cent in just the last five years.

Yet the big lies persist even here that “the progress has been made in tackling world poverty” and “extreme poverty has been halved since 1990.” 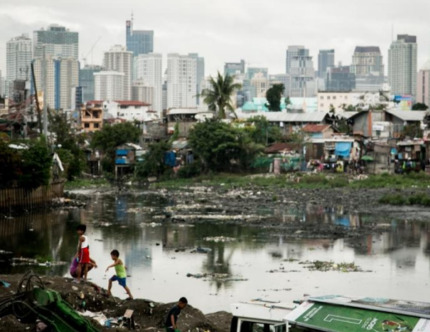 Unbelievably, the endlessly repeated assertion of the form that ‘the poor are being lifted out of poverty in ever greater numbers’ continues on untouched despite the hard evidence that, in fact, the poorer half of humanity has lost almost half of their wealth in just the last five years.

This big lie is significant in its implications. For not only is a pervasive claim about the success of globalization undeniably falsified while no-one notices it. Basic market theory and dogma collapses as a result. What is daily claimed as an infallible benefit of the global market is shown to be the opposite of reality. What does it mean for ‘trickle-down theory’ when, in truth, the trickle down goes up in hundreds of billions of dollars to the rich from the already poor and destitute?

What can we say now of the tirelessly proclaimed doctrine that the global market brings ‘more wealth for all’ when, in fact, unimpeachable business evidence shows the opposite reality on the ground and across the world. For the poor have undeniably lost almost half their share of global wealth while the richest have multiplied theirs at the same time. The evidence proves, in short, that the main moral and economic claims justifying the global market are very big lies becoming bigger all the time.

Worse than delusional, the lived reality of impoverishment of billions of people is reversed, the victims are continually proclaimed to be doing better under the system that increasingly deprives them of what little they have, and a trillion dollars worth of loss to the poorer half of humanity ends up in the pockets of the rich within only five years.

While the ever bigger lies go on justifying the global system that eats the poor alive as ‘poverty amelioration’, ever more of the same policies of accumulation by dispossession justify still more stripping of the majority as more “austerity,” more “welfare cuts,” and more “labour flexibility” – in a word, more starvation and depredation of people’s lives and life conditions as “more freedom and prosperity for all.”

The Statistical Shell Game that Masks the Life-Devouring Reality

As World Bank, IMF and like figures claim to show the uplifting of the poor out of poverty across the world, media of record like The Guardian and the New York Times report the claims with headlines to show all is well and better for the poor and the majority as they are in fact grindingly reduced in their actual lives, work and life security. Thus the very big lies are instituted as given facts which economists and social scientists propagate without a blink.

In fact, these alleged great gains for the poor out of poverty and absolute poverty alike are based on income gains of less than a cup of coffee a day, an observation that is so well blocked from view that readers may now be seeing it for the first time. Thus the hypnotic thrall of the big lies are sustained, while no other life support system is. I have had economists and interviewers of high note respond angrily when this delusion is pointed out, as if I was letting down the poor rather than exposing the big lies. In this way, we find that the masking falsehoods have gone so deep into expert and public assumption that the real-life world can no longer be engaged. These big lies then work in the background to the non-stop big lies that precede endless foreign conflicts and wars to ‘defend the free world’.

No-one appears to observe that the income gains ’lifting the poor out of poverty’ typically refer to emigrants from the countryside into polluted cities, insecure and dehumanized life conditions for those who formerly had at least a family dwelling, clean air and water and living horizons. In short, the standard $1.50 +/- measure of uplift out of poverty and extreme poverty is inhumanly absurd, but triumphally used as proof that the system is serving the least too.

The Counter-Revolution against Social Evolution that Engineers Deepening Recession

Throughout the unseen redistribution of wealth from the poor to the rich (now buried in much talk of “inequality”), ever more “market reforms” are enforced as “enhanced competition,” “liberalized de-regulation,” “reduced welfare costs” and “austerity programs to correct excesses.” The “excessive entitlements” of the system are all projected on the victims so that the truly insane entitlements of the richest to multiply their fortunes with no committed life function, value or coordinate but still more money-demand for them is somehow not noticed. This is yet another level of normalized big lies forming the ruling thought system.

In fact beneath the pervasive propaganda conditioning citizens to believe in the private money shell game devouring the world, the poorer half of humanity has been deprived of one trillion dollars of wealth while the 62 richest people have gained almost twice as much for themselves by the operations of this global disorder. Yet the Davos Report further emphasizes that still another $760-billion (U.S.) goes annually to non-producing investors by immense transnational tax evasion with impunity across the world. Again the borderless money-capital freedom of ‘globalization’ vastly enriches the richest, while simultaneously doubling down on deprivation of the poor as ‘poverty reduction’.

Here the system is programmed in effect to strip the funding of all public sectors and institutions which have evolved to serve the common life interest. Public services and infrastructures too are perpetually driven toward bankruptcy not only by never-ending defunding, cutbacks, privatizations, and corporate lobby control of public policies and subsidies, but by ever-soaring public tax evasion near one trillion dollars annually about which governments and trade treaties have done nothing to correct yet.

Thus governments which could invest in sustaining humanity’s social and ecological life support systems from growing deterioration and collapse are now systematically bankrupted or debt enslaved along with most citizens. In consequence without governments knowing why, the world economy slips into ever deeper recession from the collapse of economic demand at the public and majority levels.

The new law of human evolution is that people are required to compete for more money and commodities for themselves as “necessary to survive,” with the borderless system de-regulated and structured to increasingly impoverish the great majority while multiplying the wealth of the rich. The facts are now long in. Corporate globalization is not only out of control. It is eating the world alive at all levels toward cumulative collapse of organic, social and ecological life organization. Global competition means, in fact, the majority’s life means and security keep falling as the environment is looted and polluted on ever larger scales of depredation. Yet only “more growth” of this system is imagined as a solution. The system is clinically insane.

While the common life-ground is blinkered out a-priori by the ruling value system, those deprived and left behind disappear into multi-level big lies proclaiming the opposite. This is why the facts are not reported. This is why claimed actions to stop the world bleeding blinker out the system disorder causing them. This is why even progressives assume economic falsehoods as if they were true. Like a cancer system at the macro level, this exponentially multiplying private money-sequence system has only one set-point – to blindly grow itself while masking the life-devouring disorder as “enhancing people’s well-being.” •

John McMurtry is Professor Emeritus at the University of Guelph and a Fellow of the Royal Society of Canada. His work has been translated from Latin America through Europe to Japan, and he is the author/editor of UNESCO's three-volume Philosophy and World Problems, as well as more recently, The Cancer Stage of Capitalism: From Crisis to Cure.