Brazil’s Chamber of Deputies has opened impeachment procedures against President Dilma Rousseff, of the Workers’ Party (PT). This political manoeuvre is led by an unholy coalition including the Speaker of the Chamber, Eduardo Cunha, a right-wing evangelical from the Party of the Brazilian Democratic Movement (PMDB), who is being prosecuted in Brazil and in Switzerland for his money-dealing sins; Vice-President Michel Temer (PMDB), who is busily negotiating posts in his non-existent administration; and competing factions of the arch-neoliberal Social-Democratic Party (PSDB), that are held together by former President Fernando Henrique Cardoso. They provide political cover for grubby businessmen, ravenous financiers, neoliberal journalists, bankrupt intellectuals, opportunistic politicians, new-wave fascists, thieves and upper-middle class desperados wishing to depose the President in the wake of her re-election. 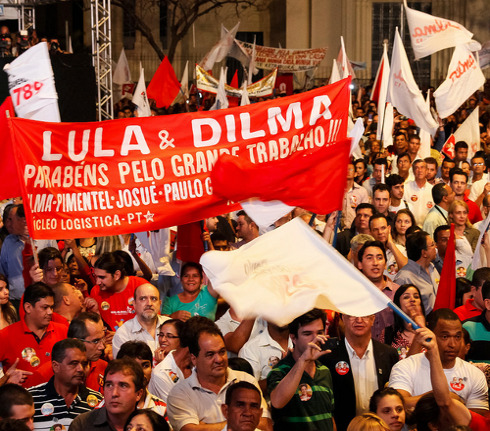 The deepest political crisis since the restoration of democracy, in 1985, is closely intertwined with the most severe economic contraction in a generation. The Brazilian economy is spiralling down, partly because of the global turmoil in the middle-income countries, and partly because of an ‘investment strike’ targeting the President’s downfall.

The scale of Rousseff’s implosion is truly staggering. When PT founder Luís Inácio Lula da Silva stepped down from the presidency, in 2010, his approval ratings were close to 90 per cent. Rousseff’s own approvals hovered around 70 per cent until early 2013. Her ratings have now fallen to single digits. Bolder rats, like former Minister Eliseu Padilha (PMDB), have already jumped ship. His more timid confrères are weighing their options as the water rises.

The country’s descent has been turbo-charged by relentlessly negative media campaigns: Brazil’s main newspapers and TV chains have not presented headlines favourable to the government since 2012. This barrage of criticism has been supplemented, in the last two years, by
a succession of corruption scandals touching national leaders, except President Rousseff, former President Lula (despite relentless attempts to implicate him in any kind of malfeasance), and Vice-President Temer. This unhinged campaign has been led by overtly partisan judges and a runaway Federal Police, seeking to lock up (first) and prosecute (later – maybe) every instance of bribery and illegal finance touching the PT, however indirectly.

In the meantime, scandals involving the opposition remain uninvestigated. The PSDB privatized the telecoms monopoly in the 1990s at a cost of billions of dollars for the public purse: case forgotten. The government of São Paulo overpaid Alstom and Siemens hundreds of millions of euros for new train carriages, part of which were ‘refunded’ to the PSDB and their friends. Case parked somewhere. The PSDB presidential candidate and former governor of Minas Gerais got the state to build an airport on his uncle’s land so he could visit his own neighbouring property when he was not enjoying a life of debauchery in Rio de Janeiro (no worries: his unelected sister ran the state in the meantime). You could not make it up. The Speaker of the Senate provided favours to large construction companies in exchange for cash for himself and regular payments to his illegitimate daughter, so he could keep her away from the voters and (perhaps more seriously) from his wife. Who cares. What matters is to impeach Dilma Rousseff by any means necessary.

Corruption in Brazil is always nauseatingly entertaining, but it cannot be eliminated one scandal at a time. Corruption belongs to the machinery of the state; it links politics with business life and it buttresses the country’s inequality generating social structures. It is, then, unsurprising that, in the 1990s, when the PT chose to win elections instead of being honourably defeated, it had to find ways to fund its campaigns, behave ‘responsibly’ and distribute favours.

This strategy worked. Lula was elected President in 2002, starting a succession of administrations that, almost invariably, followed the path of least resistance: there has been no serious attempt to reform the Constitution, the state or the political system, challenge the ideological hegemony of neoliberalism, reform the media or transform the country’s economic structure. The PT also maintained the neoliberal macroeconomic policy framework imposed by the preceding PSDB administration. The PT’s unwieldy political alliances led to ‘reformism lite’, which eventually alienated the party’s base and provoked the opposition into escalating attacks.

Those vulnerabilities were responsible for the grotesque Mensalão scandal that exploded in 2005. The government was accused, without evidence, of paying a monthly stipend to Deputies and Senators in order to secure their support. The media pressed those claims relentlessly, with destructive implications for the PT. Lula lost his residual support among the upper middle class, while the internal bourgeoisie gained an uncontested hegemony in the government coalition. The industrial working class remained supportive but passive, while the informal workers flocked to Lula because of his working class image and the distributive programmes introduced in his administration: Bolsa Família, university admissions quotas, the formalization of the labour market, mass connections to the electricity grid and rising minimum wages.

The resources made available by the global commodity boom consolidated Lula’s coalition, and the government shifted marginally to the left. It introduced an economic policy inflection including bolder industrial and fiscal policies, higher public sector investment and stronger distributive programmes. The ensuing dynamics supported Brazil’s stunning recovery after the global crisis. The country was anointed as one of the BRICS, and Lula became a global statesman. Yet, the political divide deepened. The opposition crystallized around a hard-core neoliberal alliance led by finance and the international bourgeoisie, populated by the upper middle class, and cemented ideologically by a choleric media.

The internationalized bourgeoisie used these difficulties to justify an all-out attack against Dilma, demanding the restoration of neoliberal orthodoxy. Under siege, Dilma’s economic team leaned back toward neoliberalism, but this policy shift only increased the confidence of the opposition, that redoubled its effort to win the 2014 elections. In the meantime, the judiciary tightened the screws around the PT, and successive corruption scandals came to light.

In June 2013, vast demonstrations erupted around the country. They encompassed a mélange of themes centred on ‘competent government’ and ‘corruption’, which exposed the tensions due to the economic slowdown, the government’s isolation and its failure to improve public services in line with incomes and expectations.

Dilma was re-elected through a last-minute mass mobilization triggered by left perceptions that the opposition candidate, Aécio Neves, would impose harsh neoliberal policies and reverse the social and economic achievements of the PT. However, immediately upon her re-election Dilma faced escalating political and economic crises. Her desperate response was to invite the banker Joaquim Levy to the Ministry of  Finance, and charge him with implementing a ‘credible’ (code for orthodox) adjustment programme that alienated the PT’s social base. Then another scandal captured the headlines.

The Federal Police’s Lava Jato operation unveiled a large corruption network centred on the large state oil company Petrobras and including cartels, colossal robbery and illegal funding for several parties. Blanket media coverage focusing on the PT destroyed the government’s remaining credibility, and catalysed the emergence of a powerful right-wing opposition demanding Dilma’s impeachment regardless of legal niceties. Examination of the opposition’s grievances fills a laundry basket of unfocused dissatisfactions articulated by expletives. There is no plausible legal argument supporting the President’s impeachment. The process is entirely political and degrading for Brazilian democracy – yet, it is likely to succeed in one way or another.

The dégringolade (in the sense of disintegration as well as necrosis) of the government suggests five lessons.

First, under favourable circumstances, Lula’s and Dilma’s policies both disarmed the political right and disconnected the left from the working class. However, once the economic tide turned, the ensuing confluence of dissatisfactions overwhelmed the PT, and there was no one left to support its administration.

Second, while the PT governments reduced the income gap between the upper middle class and the working class they also increased the ideological distance between them, as the former drifted to the extreme right while the latter became increasingly inert.

Third, despite its volcanic energy, the new right is devoid of mass support outside the country’s élite (the dominant feeling is that ‘they are all thieves’). There is not, then, a crisis of bourgeois rule or even the state. But there is a crisis of government that cannot be addressed constructively in the absence of economic growth. However, growth is unlikely to return while the PT remains in power.

Fourth, the extinction of Kirchnerismo in Argentina, the disintegration of Chavismo in Venezuela, and the harrowing end of the PT experiment in Brazil suggest that transformative projects in Latin America are bound to face escalating resistance from the right. It follows that the pursuit of ever-broader alliances is not necessarily stabilizing, because they are prone to internal collapse. Instead, the social, political and institutional sources of power must be targeted as soon as possible through ambitious shifts in the economic base, international integration, employment patterns, public service provision, structures of political representation and the media. These were never contemplated by the PT, and those limitations are now destroying the Party and its leaders.

Fifth, the Brazilian left remains disorganized and bereft of aspirations and leadership. Brazil is entering a long period of instability. The emergence of a new form of political hegemony may take several years, and it is unlikely to favour the left. In the meantime, we can expect
constant entertainment reading about surreal scandals and unexpected human foibles: anyone following Brazilian political economy will never be bored. Unfortunately, the stakes are too high for comic entertainment. The ongoing impeachment process is not about corruption, which is merely a serviceable excuse. It is, rather, about a right-wing coalition wrecking an inspiring left-wing experiment in one of the most important countries in the Global South. •

This post draws upon a similar piece posted on Development Studies at SOAS and on a contribution to the Socialist Register 2016, co-authored with Armando Boito: “Brazil: The Failure of the PT and the Rise of the ‘New Right’.”