A year ago this month, Israel commenced Operation Protective Edge, their third major assault on the Gaza strip since 2008. The response from Canada’s political parties was a swift and unflinching support for Israel. The 51-day war, or rather display of modern mechanical butchery by the Israel Defense Forces (IDF), killed 2,251 Palestinians, over two thirds of whom were civilians, including 500 children. More than 10,000 were injured. By comparison 71 Israelis were killed and only six of them were civilians. Roughly 500 Israelis were injured. 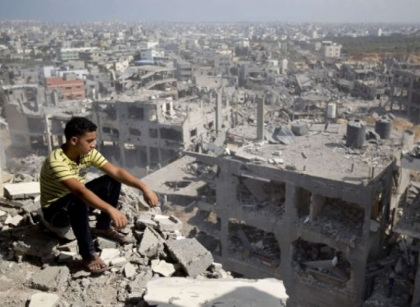 By any account this was a slaughter. But the grim toll of lives and limbs only scratches the surface of the savagery. An estimated 20,000 Palestinian homes were destroyed or suffered major damage (this figure might be very low) and more than 100,000 people were displaced. Twenty-seven government schools, 46 clinics, 15 hospitals, eight fire stations, one ambulance station and over 500 factories and workshops were either completely destroyed or severely damaged. The agricultural sector in Gaza suffered major losses as Israel targeted nearly half of the agricultural sector – driving up food prices. The Israelis also obliterated 73 mosques and partially damaged 200 others, as well as Gaza’s only two churches – that is roughly one third of the mosques in Gaza. The IDF didn’t just slaughter Palestinians – it destroyed their livelihoods.

Because of the ongoing blockade of Gaza there has been no progress in rebuilding. Only roughly 10 per cent of the materials needed for reconstruction have been allowed into Gaza most of which is earmarked for Qatari development projects and not housing. The housing crisis means increased rents, which only adds to the daily struggle for Gazans. The unemployment rate in Gaza hovers around 40 per cent and over 70 percent of residents rely on some form of humanitarian aid.

While many international leaders blamed Hamas and their rockets, it was Israeli airstrikes meting out death from above in Gaza that precipitated the escalation of violence. And underlying the suffering brought about by the war was the even deeper wound of the occupation and blockade.

So what has been the response of Canada’s political class? Within days of the assault Harper blamed Hamas for the violence saying, “the indiscriminate rocket attacks from Gaza on Israel are terrorist acts, for which there is no justification.” He stated that Hamas was responsible for civilian causalities in Gaza and “is deliberately using human shields to further terror in the region.”

As the destruction of Gaza was underway the Liberals released a statement that was indistinguishable from the Conservative position. They condemned Hamas as a terrorist organization and blamed them for starting the war. On August 11, in a speech celebrating Eid al Fitr in Mississauga, Liberal Leader Justin Trudeau declared his support for a two-state solution with a safe and secure Israel. The rhetorical support for a two-state solution is no different than the Conservative’s position or that of the Israeli government. Even Prime Minister Benjamin Netanyahu who has spent most of his adult life fighting the formation of a Palestinian state, rhetorically supports a two-state solution for the international stage (though during his recent election campaign he briefly opposed it).

The Conservative and Liberal support for Israel is no surprise. The two parties have given unwavering support in words, deeds and funds to Israel over the years.

What About the NDP?

On July 22, the NDP released a statement that condemned the loss of life in the conflict, denounced Hamas as a terrorist organization and supported a two-state solution. In short, the statement differed little from the Liberal and Conservative positions. As the slaughter in Gaza dragged on and the protests in the streets condemning Israel’s aggression grew, it became apparent to many how deeply reactionary the NDP’s position was. Thomas Mulcair tried to distinguish his stance from Harper’s by supporting the call to allow 100 children from Gaza to come to Canada for medical support. But this line essentially parroted Israeli propaganda – we love the children, but hate Hamas. A series of NDP MP office occupations by activists across the country aimed to shame the NDP and get the party to correct its stance on the issue.

The NDP has long had MPs willing to criticize Israel – Svend Robinson and Libby Davis being the most prominent examples. But since Mulcair became leader, criticism of Israel, or even talk about the issue has all but evaporated. Mulcair describes himself as an ardent supporter of Israel, “in all situations, in all circumstances.” During the attack, NDP MP Alex Boulerice circulated a petition calling on Israel to end the occupation and siege. Davis posted her condemnation of the civilian death toll on social media, but largely remained silent compared to her past statements on the issue. After a protest outside her constituency office Meagan Leslie released a statement that condemned Israel’s illegal settlements and expressed outrage at the civilian deaths in Gaza, without condemning Israel’s role in killing those civilians.

By the end of the summer one NDP MP quit over the party’s “excessively pro-Israel stance on the current conflict in Gaza.” The NDP, which has mostly been silent on the issue of late, has not altered its basic position from last summer.

The Green Party in the summer of 2014 passed a resolution condemning Israel’s illegal settlements. But during the attack the Green Party posted a statement from their party president, Paul Estrin, which condemned Palestinians for their own suffering. Estrin, under pressure from inside and outside the party, resigned. Elizabeth May, who backed the resolution condemning Israel’s illegal settlements, is at best an opportunist on the issue. She blames Hamas for the conflict, condemns any boycotts of Israel, praises the Jewish National Fund (which is one the major mechanisms for settlement expansion), and she declares herself a strong supporter of Israel.

When terrorists killed eight journalists and cartoonists at the satirical French magazine Charlie Hebdo this past winter all the major parties condemned the assault on freedom of speech. When Israel murdered 15 journalists during Operation Protective Edge not one politician in Canada condemned Israel’s silencing of free speech. The hypocrisy of Canadian politicians runs deep.

All three major parties offer Israel uncritical support. They are silent on Israel’s numerous war crimes, and violations of UN resolutions and international law. They are silent on the regular and racist practices within Israel. If and when they do acknowledge human suffering by Palestinians they either fail to mention who causes it or blame Hamas. Most importantly they ignore the occupation and blockade, and the day-to-day suffering they impose. It is the occupation that is at the root of the problem and any statement or perspective that doesn’t acknowledge this is nothing short of pro-Israeli propaganda. No two-state solution, one-state solution or peace can exist as long as the Israeli settlement project in the West Bank and the blockade of Gaza continues.

The most recent polling (done before the conflict last summer) shows that Canadians are evenly split in their support for Israel or the Palestinians. However, our political class doesn’t reflect that. The NDP has little to lose and much to gain from taking a strong stance against Israeli aggression and the occupation. By monopolizing this open political space they can give voice to those seeking justice for Palestine and also help shift the public debate. Of course, the point isn’t that the NDP should do something because it is politically opportune, but rather because it is the principled thing to do.

With the federal election coming up it is time for the political consensus on this issue to be broken. When local candidates come knocking, demand answers. If they don’t have any good ones tell them to hit the road. During local candidate debates speak up on the issue – not just to pressure politicians, but to ensure the issue is aired to a wider audience.

The massive solidarity demonstrations that have sprung up in response to Israel’s numerous attacks on Gaza in recent years are heartening. The Palestinian solidarity movement has won impressive gains in the call for boycott, divestment and sanctions against Israel. The debate has shifted, but our political leaders remain on the wrong side of history.

The all-party consensus on Israel/Palestine is a consensus on slaughter, a consensus written in blood. It operates on silence, fear and half-truths and only by speaking up can we end it. •