A Disaster Waiting to Happen: Expanding the U.S.-led ISIS War to Other Countries

According to a 29 April report in The New York Times, leaders from the U.S.-led coalition at war with the Islamic State in Iraq and Syria (ISIS) will meet in the coming weeks to consider broadening the mission to other countries. At present, the Obama administration is attempting to secure congressional support for a measure that would authorize expanding the war to such nations as Algeria, Egypt, Lebanon, Libya, Tunisia, and Yemen. Extending U.S.-led military operations would be disastrous and should be resisted. 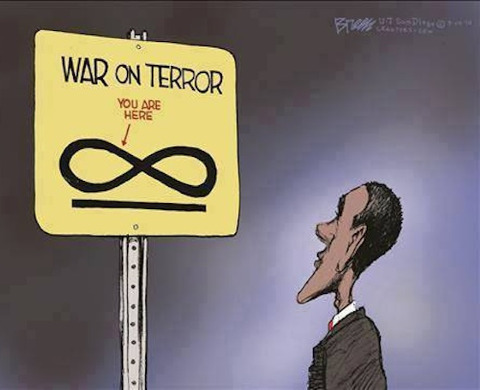 Western military intervention is not the way to solve the ISIS crisis. Thus far it has made few gains against the group and ISIS is still strong – despite the coalition being at war against them since the U.S. began carrying out airstrikes in August of last year. The coalition has gone on more than 3,700 bombing runs in Iraq and Syria but still ISIS holds important territories such as Mosul in Iraq and Deir Ezzor in Syria.

Recently ISIS has advanced on Damascus and attacked both Ramadi, the capital of Iraq’s Anbar province, and Baiji, Iraq’s largest oil refinery. There is also evidence that the number of people leaving Europe to join ISIS has actually increased in recent months. Meanwhile, there are signs of ISIS and Jabhat al-Nusra working together at Yarmouk, the Palestinian refugee camp in Syria. Therefore, coalition bombings are facilitating cooperation between ISIS and al-Nusra, as some earlier reports also suggest.

It’s possible that all this might change and that the Western-led coalition might eventually help disperse ISIS from the territories it controls. But unless the underlying conditions that enable a group like ISIS to flourish are addressed, another similarly ruthless organization will simply take its place. Furthermore, it is absurd to expect that the killing and oppression carried out by ISIS or any other actor will by halted by U.S.-led military action, because ending tyranny and violence is plainly not the objective of the U.S. and its allies’ approach to the Middle East.

As the Canadian scholars Greg Albo and Jerome Klassen write in Empire’s Ally, U.S. strategy in the region has long been guided by three goals: “(1) to liberalize the economic space of the Middle East through the Gulf Cooperation Council and the ‘normalization’ of Israel; (2) to access and regulate the distribution of oil supplies in the face of increased competition with Europe and Asia; (3) to implant U.S. military bases for the purpose of regional stabilization under U.S. hegemony.” These goals are incompatible with peace and justice and in fact undermine prospects for these.

There is no reason to believe that U.S. policymakers have moved away from these objectives since ISIS’s rise to power. Available evidence suggests, in fact, a continuity of U.S. priorities. The enrichment of American weapons manufacturers in Middle Eastern markets is a long-time feature of relations between the U.S. and the region. This is continuing to happen during the coalition’s war against ISIS. The New York Times reports that U.S. arms sales are fuelling war in “a boom for American defence contractors looking for foreign business” as Saudi Arabia spent $80-billion on weaponry in 2014 and Qatar signed an $11-billion deal with the U.S. that same year.

The United Arab Emirates are using American F-16s to bomb Yemen and Syria and want to purchase U.S.-made Predator drones; while representatives from the defence industry have told Congress that they expect a request for weapons from other “Arab allies fighting the Islamic State” such as Bahrain, Egypt and Jordan.

As the Times’ article points out, U.S. weapons makers are “following the money”: since 2011 both Boeing and Lockheed Martin have opened offices in Doha, Qatar. In December, moreover, the U.S. Defence Security Cooperation Agency informed Congress that it planned to sell the Iraqi government just under $3-billion worth of weapons. Flooding the region with weapons and arming dictatorships demonstrates that U.S. policymakers care about profiting from war and repression rather than combating them.

Ultimately the only way to stop campaigns of rape, exploitation, sectarianism, torture and murder is to address their root causes. Central among these is Western policy toward the Middle East and North Africa as is amply demonstrated by the case of Libya, which NATO destroyed for political and economic reasons, thereby creating conditions that have allowed ISIS to emerge in that country. In Iraq, similarly, the U.S. and its allies have themselves killed far more people than ISIS during the brutal invasion and occupation that gave birth to the group.

There will be terrible consequences if the war on ISIS brings to even more countries the same Western-led forces that have repeatedly undertaken profit-driven slaughters and created conditions for local parties to enslave, kill, terrorize and ethnically cleanse. Given that the U.S. elite has interests in the Middle East that are far from humanitarian, and given the continued power of ISIS, extreme credulity is required to believe that the many civilians killed by the U.S.-led coalition in Iraq and Syria are the necessary costs of defeating ISIS.

As the independent journalist Sarah Lazare writes: if the people of the Middle East are to have a brighter future, “The U.S. government must withdraw and demilitarize its failed war on terror, not only by pulling its own forces from the Middle East, but by putting out the fires it started with proxy battles and hypocritical foreign policies – including its alliances with governments that directly and indirectly support ISIS, from Saudi Arabia to Turkey.” For this to happen, social movements inside the U.S. and allied states against war and for socio-economic equality will need to be revitalized. •

This article first appeared on the Middle East Eye website.

Greg Shupak writes fiction and political analysis and teaches media studies and English at the University of Guelph-Humber. He is the author of The Wrong Story: Palestine, Israel, and the Media. Follow his tweets at @GregShupak.