Rather the Useful Idiot: Ukraine in Turmoil

The images from Odessa were truly horrific. Burnt corpses, a strangled pregnant woman, people jumping out of windows to their deaths. Yet perhaps the most disturbing of them all was the scene where a group of young educated looking teenage girls, draped in the Ukrainian flag, were happily making the Molotov Cocktails that would later help cause the deaths of over 40 people. These images encapsulated how the Maidan had transformed from being a movement for hope to one of tragedy. 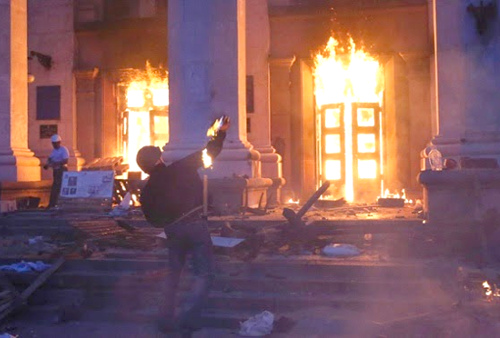 On the one hand, the Maidan represented a genuine social explosion of unrest against a corrupt, inefficient and sometimes brutal government. Thousands came onto the streets, amongst them the young aspiring middle class, who believed that former President Viktor Yanukovych had taken away their prospect of enjoying a ‘normal’ life within the EU. Maidan seemed to be following a well-known script, with the lure of the democratic and economic freedoms in the West sweeping away the last authoritarian remnants of the Soviet era.

However, whilst politicians from the West posed for photographs and handed out cookies, the demonstrations were developing into a violent confrontation with the authorities. Furthermore, those leading this fight were the organized groups of the far-right (predominantly the newly formed Right-Sector), which excluded alternative movements from the left. The regime disintegrated under this pressure after the horrific (although as yet not fully explained) shooting of demonstrators and militiamen by snipers. Yet this was not a victory for civil society or democratic values. It was a conquest of power by oligarchs favoured in the West, which were dependent upon the support of the emboldened far-right.

Despite the patriotic rhetoric and symbolism, this is not a new government of unity in Ukraine. During the first days of the newly formed government the parliament passed laws such as repealing minority languages, outlawing the Communist Party and removing the ban on Nazi propaganda. Some of these bills were rejected by the President, but the political mood had been set. Six members of the neo-Nazi Svoboda Party obtained cabinet positions in the new government. This is a party that the European Parliament had previously described as having views opposed to the EU’s fundamental values and principles and which openly claims the historical tradition of the Ukrainian Insurgent Army (UPA) and its leader Stepan Bandera, which carried out the genocide of around 70,000 Poles during World War Two.

Yet those in the East of Ukraine have the same concerns as those in the West. They live in this corrupt oligarchal state and have had to endure the living conditions of a country whose GDP per capita remains 20 per cent below what it was when the Soviet Union collapsed. The EU association agreement, that Yanukovych refused to sign, could not be accepted in these eastern regions as it included the conditions for an IMF loan that would have raised energy prices, cut social spending and opened up the country’s uncompetitive industry to the European market. The present government has decided to continue along this path of austerity, which will further depress living standards and widen social divisions.

It is this structural crisis in the country’s economic base that has driven the ongoing social and political rupture in Ukraine. The state is literally fragmenting and the country is being torn apart. These internal pressures are being exacerbated by outside interference (to its East and West) with the country becoming an epicentre of a potential global conflict. The accession of Crimea into the Russian Federation was one stage in a process whose end is unclear. Undoubtedly this was an opportunistic act by Russia that has helped to fuel Ukrainian nationalism and resentment. But it was also carried out peacefully and with at least the acquiescence of the local population, many who were undoubtedly relieved to be escaping a country engulfed in conflict.

The West seems to believe its own propaganda. It wants to claim that all that stands in the way of a free and independent Ukraine, integrated into the West, is an aggressive and interventionist Russia. Whilst not doubting Russia’s own ambitions in Ukraine, what this narrative leaves out is the population of eastern and southern Ukraine as independent actors. It exaggerates the power of Russia and Vladimir Putin to such an extent that it ignores the opinions and aspirations of the millions of people living in these regions.

As in the West, So in the East

The forces opposing Kiev in Eastern Ukraine copied the tactics deployed by the Maidan protestors in the West of the country, with masked men taking control of government buildings. But whilst western commentators welcomed these actions when they took place in Lviv or Kiev, they were seen as being simply terrorist actions organized by foreign agents when they occurred in Donetsk or Slaviansk. And when seen in this way the solution is clear: send the army to eastern Ukraine to defeat these outside invaders.

The problem for the Kiev authorities is that the Ukrainian state and armed forces are not strong enough to wage war even against its own people. The army remains weak, chronically underfunded and its forces are disillusioned and divided. This has caused large defections by sections of the armed forces and police, who cannot understand why they should fire on their own people. Assaults by tanks and fighter planes have as yet been insufficient to overthrow opposition administrations in towns such as Slaviansk. With the army unable to carry out this task, the responsibility has fallen onto the newly formed National Guard, the Right Sector and other paramilitary groups to root out the ‘terrorists.’

The Rubicon was crossed in Odessa, in what can only be described as a fascist pogrom. This was followed less than a week later when more than twenty people were shot, on Victory Day, in the town of Moriupol by members of the National Guard and Right Sector. Behind these events are conflicting accounts of conspiracy and outside involvement. But it is hard to imagine a more effective way of pushing the population of the eastern regions closer toward Russia than by murdering people on their streets. Although much of this has been disguised from our television screens, the ostensible supporters of democracy are riding tanks into towns, burning people in trade union buildings, shooting down unarmed civilians and firing on people queuing to vote outside election offices.

In order to justify these actions an atmosphere of delusion and self-censorship reigns. To speak out against these horrors is to be a supporter of Putin and a believer in Russian propaganda. Silence is needed if these atrocities are to continue.

In Poland this atmosphere is all prevailing. The establishment and media are now united around the previously derided foreign policy precepts of the conservative right. These state that the Russian army is intent on moving westwards through Ukraine and possibly into countries such as the Baltic States and Poland itself. The government has encouraged an atmosphere of war, with PM Donald Tusk announcing that at stake in the European elections is whether children will even be able to go to school in September. Such a climate of fear has helped to justify the government’s policy of raising defence spending by around €24bln by 2020 and the call by the Defence Minister, Radosław Sikorski, for 10,000 NATO troops to be deployed in Poland. It has even allowed Polish politicians to support political forces that raise the banner of Bandera in Ukraine.

This atmosphere has permeated large sections of the liberal left in Poland. The country’s liberal mouthpiece, Gazeta Wyborcza, has been doing all it can to prove its anti-Putin credentials. It recently nominated the Russian oligarch, Mikail Khodorovsky, a man who had amassed billions when Yeltsin was selling off the country’s economy to his corrupt friends, as its Person of the Year. The editor of Gazeta Wyborcza, Adam Michnik, has even compared him to Nelson Mandela. It seems that falling out with Putin is enough to make anyone a hero nowadays.

Whilst the main centre left party (the Democratic Left Alliance) has attempted to diffuse this atmosphere of war and openly warned of the dangers of the far-right in Ukraine, the country’s ‘new left’ has tended to replicate liberal opinion. The leader of the liberal populist Your Movement party, Janusz Palikot, argued that the solution to the Ukrainian crisis was a combination of NATO troops and shock-therapy. The leader of Political Critique, Sławomir Sierakowski, was an early cheerleader of the Maidan protests, believing them to be a potential source for a renewal of the EU itself. Once this optimistic scenario had proved too far-fetched, Sierakowski then labelled those criticising the new Ukrainian administration as being Putin’s ‘useful idiots.’ In the week before the Odessa tragedy he had an article published in the New York Times that claimed that the Right-Sector was not a threat in Ukraine because (wait for it) its leader had met with the Israeli ambassador and told him they would oppose discrimination. Among some ‘progressive’ circles in Poland today it is acceptable to (quite rightly) condemn the far-right when it burns down the rainbow structure in the centre of Warsaw, but not when its Ukrainian counterparts burn people to death in Odessa. Rather the useful idiot, than the worthless genius.

Those who really fear a Russian invasion of Ukraine should realise that when pro-Kiev forces kill people in eastern Ukraine, so the country falls further apart. If it is really true that the autonomous governments in the eastern regions are led by Russian nationalists and separatists, then those supporting the retention of at least a federal Ukraine need to win the support of the region’s ordinary citizens. The silent majority after all want just peace and stability.

If the country falls into a full blown civil war then all sides will lose their moral high ground as atrocities will be followed by revenge and killing will beget more killing. The prospect of the Maidan being a movement of national renewal in Ukraine that could unite its eastern and western parts has long passed, if it ever indeed existed. Only negotiations between those in power in western and eastern Ukraine and allowing internationally observed elections and referendums could possibly offer a peaceful way out of this crisis. As the atmosphere of war intensifies, the radical position is one of moderation. It is harder to call for peace and negotiation than it is for further conflict. •

This article first appeared at beyondthetransition.blogspot.ca.

Gavin Rae is an activist living in Poland and writes about Central-Eastern Europe on his blog beyondthetransition.blogspot.ca.