Three events that occurred in the space of three days create sufficient ground for suspecting that [Turkish Prime Minister] Recep Tayyip Erdogan is playing with the Syrian fire in order to extricate himself out of the situation he faces. First, a commando of three foreign fundamentalist militants engage in a shootout with the gendarmes and the police on a motorway in Central Anatolia, leaving one policeman, one gendarme and one passer-by dead. The militants have been travelling in a taxi from Hatay on the Syrian border to Istanbul and are supposedly discovered by coincidence. They are almost a caricature of the typical Al Qaeda commando, two Albanians and one Kosovar fighting in Syria. 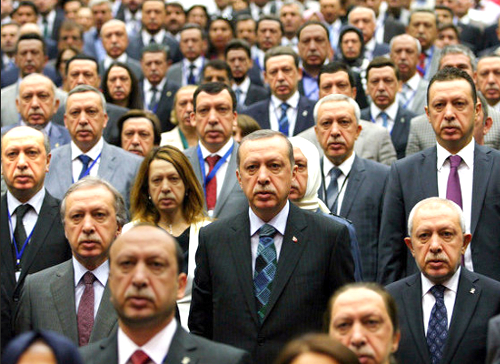 Just as everyone is saying this could be the work of the Islamic State of Iraq and Sham (ISIS), a fundamentalist organization which is fighting
in Iraq, Syria and Lebanon (Sham in Arabic means the Levant, in other words Greater Syria) and which follows such radical policies that it
has fallen out with the central Al Qaeda leadership of Aiman al Zewahiri, comes the official ultimatum by this self-same organization concerning the tomb of Suleiman Shah, reputedly the grandfather of Osman, the founder of the Ottoman state (1299). This tomb and its surroundings are Turkish territory according to an agreement signed with the French colonizers of Syria in the 1920s, the only territory Turkey officially possesses outside of its borders. The ISIS has militarily occupied the village dominating the hinterland of the small picturesque peninsula on which the tomb is located and is now demanding that Turkey cede sovereignty over this peninsula to the ISIS. Nothing short of an ultimatum: Turkey will have to withdraw its military forces in three days or else… Mind the deadline: surely before 30 March, i.e. Turkey’s local elections.

Downing of a Syrian Fighter Jet

Just as everyone is asking whether something is being cooked in order to divert attention from Erdogan’s woes that come from the notorious audio tapes (allegedly pretty soon video tapes as well) and win him support on the basis of the mantle of the victorious commander-in-chief, comes the downing of a Syrian fighter jet near the border between Syria and Turkey. The Turkish side claims that the Syrian aircraft has violated Turkish airspace. In what is a very predictable move, Erdogan immediately declares that Turkey will act as harshly in the future also and pointedly thanks the armed forces and, in particular, the Chief of the General Staff, his man in the army.

Too much to be attributed confidently to pure coincidence. Especially the ultimatum extended by the ISIS regarding the tomb of Suleiman Shah seems to be too far-fetched not to raise suspicion. Whatever its combat capacity, the ISIS stands as a puny force compared to the Turkish military, wielding the second biggest army of NATO and combat seasoned after years of fighting the Kurdistan Workers’ Party (PKK). So why would it want to provoke Turkey and willingly engage in a trial of strength it simply cannot win? The incident becomes all the more suspicious when one remembers that the Erdogan government and its scandalously unsuccessful Foreign Minister Ahemt Davutoglu have been supporting the ISIS financially and logistically in northern Iraq and Syria against the forces of the PKK-dominated Rojava, i.e. the now autonomous Kurdish region in Syria. Why would the ISIS bite the hand that feeds it, unless, of course, the master has asked it to perform the trick of making the world believe that it has done so?

Despite the hubris he is still displaying and the threatening over-confident language he is using at election rallies, Erdogan is painfully aware that he is at the edge of an unfathomable abyss. Given the egocentric and megalomaniac character that he has proved to have, he may very well try to pull the whole country into that abyss along with himself. But now contemplating to engage, as he seems to be doing, Turkey into a military adventure in the Syrian inferno, he would really be pulling the whole region, if not the whole world, into that same precipice.

Everything must be done to stop this folly if Erdogan really intends to create hell for the hundreds of millions who inhabit the Middle East just so as to save his own skin. •