The resolutions adopted at the National Union of Metalworkers of South Africa’s (NUMSA’s) congress in December mark an important rupture in South African politics. NUMSA, the Congress of South African Trade Unions’ (COSATU’s) largest affiliate, has refused to endorse the African National Congress (ANC) ahead of this year’s elections and is to explore the establishment of a new movement for socialism. This is a significant challenge to the increasingly contested leadership of the ANC-led alliance, not least because it seeks to build and draw on a mass movement in order to win social and economic change. In our view, it is also the most promising development that progressives – those who support substantial economic and social change in favour of the disadvantaged – could have hoped for. 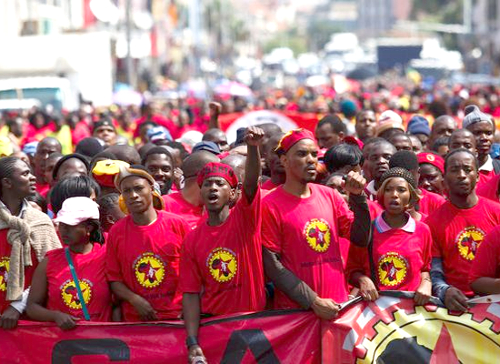 NUMSA’s decision can be seen as a political consequence of the Marikana massacre of August 16, 2012 and the shockingly tame response to it. How could such an event, entailing a deliberate act of violence by security forces, targeted at a (supposed) constituency of the ruling alliance in the key mining sector not affect the status quo? We still do not know who ordered the use of live ammunition. Why have there been no resignations from the Cabinet or the police?

Last year, Planning Minister Trevor Manuel gave the annual Ruth First memorial lecture at the University of the Witwatersrand, a choice of speaker that was a travesty in the light of First’s radical legacy, including outstanding work exposing the conditions of migrant labour. Manuel was prepared to discuss the long-term proximate causes of Marikana, yet say nothing about the immediate responsibility for the massacre, and to advocate continuity in policies that have failed workers.

Break with the Past

NUMSA has confronted the elephant in the room: mine workers’ anger toward the National Union of Mineworkers (NUM), once Cosatu’s largest affiliate. It testifies to a decision to break with the past that is anchored in a will to honour the victims of Marikana. At its congress, NUMSA raised more than R350,000 for the families of those who were killed, who have been largely abandoned, having to fight even for fees for legal representation at the commission of inquiry investigating the massacre. NUMSA delegates wanted President Jacob Zuma to resign over Marikana, not just Nkandla.

All this puts NUMSA in stark contrast to the ANC’s Cyril Ramaphosa, a former NUM general secretary and a strategic shareholder in Lonmin, who called the Marikana strikers “dastardly criminal” and who demanded “concomitant action” be taken against them, or the South African Communist Party’s Blade Nzimande, who called the striking mine workers “counter-revolutionaries.”

NUMSA’s decision entails recognizing that the ANC government obsessively defends the interests of big business and finance, as well as of a few of its own selected ‘partners’ to established capital, at the expense of the working-class, which includes the unemployed and the precariously employed. Indeed, too many in the ANC now openly show contempt for the poor, as when the Gauteng premier told Bekkersdal residents: “The ANC doesn’t need your dirty votes.”

The official rhetoric is, of course, different, including the increasingly ludicrous reference to a “second stage” of the national democratic revolution. Instead, what South Africa has experienced since 1994 is closer to a national neoliberal revolution, with the control of policy in the hands of the Treasury in the name of “business friendliness.”

In post-apartheid South Africa, many of the characteristics of late apartheid are being actively reproduced and are not simply an unchallenged legacy of the past. The financialization of the economy has seen enormous growth and rewards to finance and shrinking levels of long-term investment. Liberalization of exchange controls has resulted in large-scale capital flight, made worse as big corporations have relisted overseas. Capital flight has been combined with a debt-driven consumption boom causing what economists call an import leakage: the middle and upper classes’ credit-fuelled consumption of imported (often luxury) goods exacerbates the current account deficit, which makes the economy increasingly dependent on portfolio (short-term, not long-term, investment) flows.

To attract such flows to balance the current account, it is necessary to maintain high interest rates – reminding us that low interest rates are another promise on which the Growth, Employment and Redistribution strategy did not deliver. The “economic freedom” denied to the majority has not really benefited the aspiring black bourgeoisie.

The control of much black economic empowerment (BEE) funding by large private companies has furthermore led to jobs being outsourced to “micro-entrepreneurs,” who are asked to perform the same task but without permanent employment and its associated benefits. Well-paid consultants are then brought in to help them acquire the “business skills” they lack.

South Africa needs an economy that creates more and better jobs. This will entail policies that regulate finance and address productive sectors, as well as policies that address all areas of workers’ lives, from housing to transport, education and health. An important part of this will be to deal with the consequences of cartels, which assert control over value chains, often directly appropriating the income of poor workers and grant-holders.

Two moves are thus promising. First is NUMSA’s intention not to rush into electoral politics but to form alliances with progressive forces, whether political, union or social movements. The latter have been all too often attacked by the state, and their inclusion in a broad movement promises that key questions – from housing to water and electricity distribution – will receive the attention they deserve. Second is NUMSA’s statement about organizing across value chains, including its announcement that it will organize mine workers. Moreover, NUMSA shows signs of serious engagement with economic policy issues and willingness to mobilize labour in support of progressive economic policy objectives, such as the all-important issue of the (inflated) price of key industrial inputs.

There is time to debate what sort of party South Africa needs and its establishment will be a process. And while there is much to commend about NUMSA’s decision, it would be foolish to imagine that it will succeed easily. The building of such an ambitious project will face huge challenges.

The first and most immediate one is the difficulties the union is bound to experience when it integrates large numbers of mine workers. Building new alliances on the left will in all likelihood entail difficulties as well as opportunities. And last but not least, the reaction of the alliance will be harsh, with great effort made to isolate NUMSA. This is intensified for the ANC because there is much to lose with political power for a movement that presides over avenues of accumulation intertwined with the circuits of the state.

Yet, if NUMSA continues to send positive signals, it may well succeed in building a mass movement, attracting those disillusioned with the ANC and ready to embrace a credible socialist alternative. Looking at the state of politics around the world, Latin America aside, it is hard to think of a more promising opportunity for real progressive change. •