Agrarian Sovereignty and the Agrarian Question

As activists and scholar-practitioners from around the world gathered in New Haven, Connecticut last weekend at the Food Sovereignty conference to debate the future of the world food system, it is obvious that the planet faces a systemic global subsistence crisis: almost a billion people chronically malnourished, another billion people always unsure from where their next meal will come, 500 million that are clinically obese, and 1.5 billion people that are overweight. In my recently-published Hungry for Change: Farmers, Food Justice and the Agrarian Question (Fernwood, 2013), I explain how the creation, structure and operation of the capitalist world food system is marginalizing family farmers around the world. I also show how, on the margins of that crisis, an alternative future is not only being envisioned but is being built by mass movements of people. 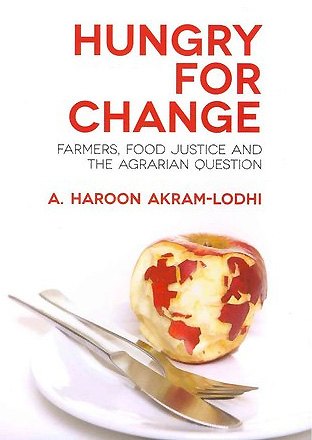 In the contemporary global capitalist food regime, entitlements to food require money, a fundamental historical change of recent provenance that sustains the insecurity of contemporary access to food because the rural poor need money that they do not have. Yet money and markets in access to food have been around for time immemorial: what is now different? The difference is that family farmers and small-scale peasants now live and work in an economic system that compels them to make certain decisions and when they fail to meet the dictates of that system they are forced to quit.

That economic system is capitalism, and in the last three centuries it has transformed food provisioning and farm production. To understand how capitalism has changed farming and agriculture, the ‘agrarian question,’ first introduced by Karl Marx in volume 1 of Das Kapital, needs to be tackled: whether or not, and if so, how, capital and capitalist relations of production are or are not transforming agriculture. This transformation occurs by dispossessing farmers through outright displacement from the land or through the advent of marked differences in rural wealth arising from the everyday workings of highly imperfect markets.

How Did Capitalism Transform Agriculture?

This transformation began to be engineered in the developing capitalist countries through colonialism. Small-scale peasant farmers around the world were drawn into the world’s first global food regime, which reconfigured rural landscapes and farming systems to produce large quantities of food for export in rigged imperialist markets. This created food-based deprivation in developing capitalist colonies because peasant farmers needed money to pay colonial taxes and therefore had to sell their crops rather than consume them themselves. Peasants resisted their incorporation into the global food regime, and the story of this resistance can be told through the peasant wars of the 20th century, which sought to overthrow emerging capitalist social structures by introducing pro-poor redistributive land and agrarian reform.

Yet the socialist and capitalist land reform programs that were introduced around the world to quash peasant militancy failed to meet the aspirations of the peasantry, and indeed often increased the control of land by the rural ruling classes. As a consequence, the processes by which capitalist markets and capitalism were transforming farming and agriculture to the detriment of the peasantry was in fact broadly accelerated in many places and spaces.

This anti-peasant bias was reinforced by ‘Green Revolution’ agricultural technologies that were designed to increase farm productivity per unit of land. These technologies were developed in the 1940s, applied in the 1950s and 1960s, and resulted in dramatic increases in farm yields between the mid-1960s and early 1980s. However, the Green Revolution did not alleviate the increasing insecurity of peasant livelihoods. No: reinforced by externally-mandated processes of economic ‘adjustment’ the Green Revolution contributed to the ongoing and deepening differences in wealth and inequality evident across developing capitalist countries as capitalist relations of production spread through agriculture and peasant populations, increasingly displaced from their land, were forced to migrate into urban slums. More recent efforts to use transgenic biotechnologies to bring about a ‘gene revolution’ are doing the same: further deepening entrenched rural inequality and sustaining the ongoing capitalist transformation of agriculture.

The predatory capitalist state has been deeply complicit in this process, facilitating the establishment of a global capitalist food regime that has undermined peasant and family farming in many countries, to the benefit of the large-scale capitalist farms and industrial agriculture that has consolidated its dominant position in the world food system over the last 75 years. The United States in particular has used its hegemonic position to suture together a contemporary global capitalist food regime that has dispossessed, through displacement and differentiation, small-scale farmers around the world, organizing and configuring a global capitalist food regime that is dominated by transnational agro-food capital, most particularly supermarkets. Transnational agro-food capital has transformed societies in order to construct export-oriented agricultures, but in ways that deepen the global subsistence crisis and create a ‘relative surplus population’ in the ‘planet of slums.’

Is There a Route Out of the Global Subsistence Crisis?

So the struggle for food sovereignty needs to be reinforced on a broader scale; fundamental changes to global farming and agriculture are needed to tame capitalist markets and construct a people- and community-centered, climate-friendly, local and sustainable food system that is not subservient to the law of value and which produces abundant, nutritious, culturally appropriate and tasty food using low impact agroecological principles that work to conserve the environment. An alternative food regime is possible, and answering the agrarian question of our times and eliminating the global subsistence crisis is possible, and now; but it will require transcending capitalist social relations in farming and agriculture and instead uniting diverse food movements around an agrarian alternative that, in meeting the need for food justice, meets the aspirations of global consumers, family farmers and peasants. It will require agrarian sovereignty. •

More information on Hungry for Change: Farmers, Food Justice and the Agrarian Question can be found at fernwoodpublishing.ca/Hungry-for-Change.