How can the left fight back in the age of austerity? This is a clear and constant question being posed by and to people on the left. When the worldwide economic crisis hit in 2008, it was clear there would not be an immediate shift toward radical alternatives to capitalism. Still, five years into the crisis there has been little growth or development in the position of the anti-capitalist left. 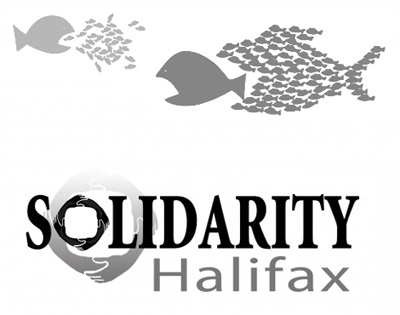 This is not to say there hasn’t been plenty of struggle or resistance; the Occupy movement and Idle No More are proof of that. The crisis on the left is not one of struggle or resistance; it is a crisis of organization and strategy. The question is: how can we collectively move beyond defensive struggles to offensive strategies that are capable of turning short-term resistance into a long-term organizing strategy? What the left has largely been lacking are organizations that can effectively develop and fight for alternatives to capitalism.

The economic crisis exposed a material crisis of ideas, organization, and leadership on the left. In the face of this crisis, we want to point out Solidarity Halifax, a project that we were at various times involved in that is taking this crisis seriously by attempting to strengthen the collective power of the anti-capitalist left in Halifax, specifically.

We understand the process of forming and developing Solidarity Halifax as a gesture that others on the left should be making if we want to go beyond countering austerity and defending what little there is left to defend and toward building alternatives to capitalism and strategically fighting for something better.

Solidarity Halifax was not formed in a day. In fact, it was an important, but rather lengthy process. In response to a meeting of the G8 development ministers in Halifax in 2010 (part of the lead up to 2010 G8/G20 meetings in Ontario), an ad hoc group of social movement activists organized a protest to denounce the actions of the G8/G20. The individuals involved in this organizing were also part of the student, labour, feminist and environmental movements.

Like many on the left organizing around various convergences of state leaders and others, we had eschewed discussing broader political questions in favour of organizing the demonstration. After the protest, though, some of the people involved in organizing, ourselves included, saw a need to build on the dialogue and relationships forged during the course of organizing this specific event. We identified a need for people on the left to coordinate with one another, not only when reacting to large-scale meetings of state officials or government activities, but also just generally in an on-going way.

With this goal in mind, this ad hoc group planned three “working conferences” over the next year under the banner Solidarity Halifax. The conferences attempted to bring together people who identified with anti-capitalist politics to openly debate issues the left faces and build toward collective analysis and collective action. The conferences dealt with questions of left unity, strategy, racism, patriarchy, religion in our movements and our orientation toward capitalism. Whenever possible, these questions were grounded in discussions of actual struggles individuals had participated in, as to help relate the theoretical issues we were tackling with the concrete experiences of people already identifying as part of the left.

There were concrete and difficult challenges to organizing the conferences: wanting to balance transparency and accountability in the organizing with completing tasks; needing to create space for political debate but being limited by time; having effective dialogue between individuals with vastly different political experience, to name a few. The rotating organizing committees of the various conferences attempted to address the challenges and critiques of the conferences strategically.

Leading up to a third Solidarity Halifax conference in November 2011, members of that conference’s steering committee decided there was a need to assess support for the establishment of a pluralist, non-sectarian anti-capitalist organization that was membership based. The steering committee acknowledge that unless others agreed with the need for a new organization putting effort into its construction would not be effective or strategic. In November 2011, attendees of Solidarity Halifax III agreed to begin the process of building a new anti-capitalist organization in Halifax.

The origin of Solidarity Halifax was not a smooth road to the development of a new organization; it was a process of dynamic tension that involved a whole lot of trial and error. Those organizing were not all of a single mind about the outcome of this process or about how to move forward at any given time, but this divergence and the occasional misstep lead people to see the need for a structured organization.

In part, Solidarity Halifax was born out of a shared belief in broad-based organizing and a shared frustration of sectarian practices. Addressing conflict in a respectful and useful way required more than just a new organization, it also meant we needed to have a new sense of collective identity in struggle. We saw the need for a non-sectarian attitude that fostered a culture of conflict within unity was essential in the creation of an effective anti-capitalist organization in Halifax that could speak to people beyond the radical left.

This attitude meant working across old political lines and creating the space for respectful and honest debate. People will not always agree on the best way forward or the best decisions, but we want to build structures to be able to debate our ideas and defend our positions, and be willing to listen to the ideas put forward by others and change our minds. This, we think, is better than taking the position that we can only work with those with whom we are completely politically aligned with. Solidarity Halifax, we think, has taken up this approach in a serious and dedicated way.

In terms of public work, Solidarity Halifax has been involved with and supportive of a number of social movements and labour struggles in Halifax. It has hosted workshops on Idle No More and the Quebec student movement. It has launched a vigorous “Power to the People” campaign aimed at putting Nova Scotia Power back into public hands.

“Power to the People” has allowed Solidarity Halifax to effectively speak to the wider working-class about the notion of corporate control over basic public goods and services in the province. It speaks to a major concern that most Nova Scotians have, ever escalating power prices, while at the same time challenging the marketization of what should be collective resources. While the demand to put Nova Scotia Power back under public ownership is not necessarily radical, it does allow Solidarity Halifax to pose questions about how capitalism operates in the province to a broader swath of people.

Solidarity Halifax has provided a space not just for organizing campaigns, but also for members to engage in political and strategic discussions that serve to sharpen political practice. It has given a living form to anti-capitalist sentiment and politics rooted in the concrete conditions of the city.

We do not want to imply the organization is perfect. Solidarity Halifax, like any political organization on the left, faces a series of challenges. How fast should it grow? How should it orient itself to electoral politics? How does it relate to the broader Canadian far-left? How can it tackle the problems of racial and geographic segregation in the city? How can it sustain conflict within unity? How to make sure the internal democratic structures are sustained when the organization’s membership grows? These types of challenges are the challenge of organizing a political alternative to capitalism. They are best answered with a principled and democratic method.

In addressing these questions and more, Solidarity Halifax has made clear attempts to shift its structure, to take risks in how it organizes meetings and events. Initially, Solidarity Halifax set aside space in every general membership meeting for debate on an issue related to the anti-capitalist left. Members organized a series of social events that included food and political discussion at the homes of other members not only as a strategy to build collective analysis, but friendships among members. And when the initial structure of the organization began to fall apart, the members decided to abandon it for another.

The organization is still quite new, about a year and a half old in its current form. It is still evolving, but it has developed a method of practice and politics that is more than a simple reaction. It has created a democratic, membership-based organization that is committed to strengthening social movements and creating political alternatives to capitalism. Although the project is rooted in the concrete social and political realities of Halifax, in our opinion other activists in other cities (not just big cities) can learn from Solidarity Halifax’s formation.

We need to reignite our anti-capitalist imaginations, clearly layout our political analysis and develop strategies that deal with the concrete realities of organizing in Canada. We need to think long and hard about creating organizations that allow this to happen in a democratic and accountable way. And we need to fight the urge to succumb to sectarianism where a small fraction of people tear each other down and instead learn new ways of working together to build something better than today’s anti-capitalist left, something that could actually threaten capitalism. The times demand it! •