Death of Margaret Thatcher Reopens the Debate Over Her Cruel Legacy

The death of former Prime Minister Margaret Thatcher on April 8 has renewed an intense political debate in Britain and internationally over her legacy. For her ruling class sycophants, Thatcher was a heroine, “one of the greatest” prime ministers Britain ever had. While she is falsely credited with lifting Britain out of a lasting economic slump during the 1970s, she did succeed in imposing a drastic and lasting shift in the balance of social and economic wealth between rich and poor, very much to the detriment of the latter. She was prime minister from 1979 to 1990. 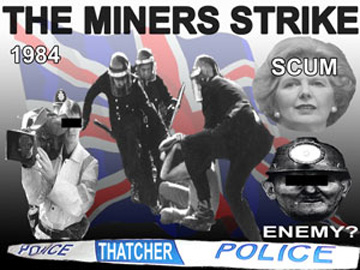 Thatcher imposed pro-capitalist mantras such as slashing the social wage to achieve “balanced” government budgets, privatization of the delivery of public services and relaxing the regulation of stock markets. She privatized public housing on a vast scale and promoted the virtues of individual home ownership and patriotic war.

Her Labour Party opposition and successor governments recoiled from mobilizing against the program of Thatcher and her Conservative Party. They ended up embracing much of the ideology underpinning it. In 1997, she was the first dignitary to visit newly elected Tony Blair at 10 Downing Street. During the special debate on Thatcher’s life and legacy in the British Parliament on April 10, Labour Party leader Ed Miliband said, “She was right to recognize our economy needed to change.” He paid tribute to her colonial war against Argentina in 1982 to retain possession of the Malvinas (Falklands) Islands and called her “a unique and towering figure.”

Trainwreck of a Legacy

For those who were her victims, though, it’s another story. Thatcher created a trainwreck of industries dismantled, public enterprises privatized, jobs lost, social services cut and communities wrecked.

Today, the privatized British rail system is a high-priced patchwork of companies under increasing fire by its users, even the business class that relies upon it. Electricity and natural gas prices are sharply rising in a monopolized market controlled by six firms earning fantastic profit rates while the country doesn’t know how and if its future energy needs can be met. The country is in the grip of an acute housing crisis.

Thatcher’s successors in the Conservative/Liberal Democrat governing coalition are in the midst of cuts to social services the likes of which would be the envy of the “Iron Lady” herself. Late last month, the Coalition Government announced a stunning new round of cuts to social services, this time amounting to some £19-billion ($30-billion U.S.). It includes a special cut to social housing – a “bedroom tax” against those deemed to be living in a larger space than their family size is deemed to warrant.

The same government budget provided yet another tax break for the rich.

In Northern Ireland, Thatcher extended Britain’s war against the unification and self-determination movement of the Irish people. That war reached new levels of cruelty in 1981 when she turned her back on a hunger strike of political prisoners in Northern Ireland, ten of whom would eventually die of starvation.1

Proud of all these accomplishments, Britain’s rulers are pulling out all the stops for Thatcher’s funeral to take place on April 17. She will receive a “ceremonial state funeral,” just one rung below the full deal typically reserved for dead royalty. (Winston Churchill was the last prime minister to receive a state funeral, in 1965.) Queen Elizabeth will attend. So too will a long list of foreign, capitalist dignitaries, including President Barak Obama, all the living, former U.S. presidents, and Canadian Prime Minister Stephen Harper. (President Cristina Kirchner of Argentina is taking a pass.)

Fittingly, the ceremony will receive full military honours, “Fit for a war hero,” in the words of the Mirror tabloid.

But there are political dangers associated with all the praise and lavish pageantry accompanying Thatcher’s death. In its front page report on the April 10 session of Parliament, a team of Guardian journalists wrote, “[Prime Minster] David Cameron and [opposition Labour Party leader] Ed Miliband battled to ward off a growing risk that Lady Thatcher’s death will polarise and even damage the nation…”

The Daily Mail and other right-wing dailies are railing against the extraordinary public events that have erupted across Britain to condemn Thatcher’s cruel legacy and challenge those who would defend or prettify it. The Mail‘s front page on April 10 was headlined “The flames of hatred.” It featured a quasi-apocalyptic photo montage of police wielding truncheons against bleeding and injured protesters while fires blaze in the background.

“Riot squads against the mob,” screamed a story headline inside the same edition, again replete with jarring photo montages.

The newspaper is voicing hatred and contempt for Thatcher’s critics. “Crawling out of the woodwork, the old Lefties spewing bile,” was one story headline. Another read, “Labour vitriol sours day of tribute,” criticizing the Labour Party MPs who are setting Thatcher’s record straight.

Coincidentally, the railings of the Mail and other dailies provided a helpful overview of the scale of the condemnations of Thatcher’s legacy. They are very widespread, including a rally of several thousand people in London’s Trafalgar Square on April 13.

The strongest condemnations are from the areas hardest hit by her policies, notably in the coal mining regions of northern England and industrial Scotland and in Northern Ireland.

The Guardian reported from the town of Orgreave in northern England. It’s the site of one of the bloodiest police assaults on coal miners during the historic strike of 1984/85. Pete Mansell, who worked underground for 22 years, told the paper, “I’m not a hypocrite. I spoke ill of her when she was alive and I’ll speak ill of her now she’s dead. She doesn’t mean two iotas to me.”

Chris Whitley, 56, was in a pub with friends and was asked if they were there to celebrate. “Course we are. She killed these villages.” Tens of thousands of coal miners lost their jobs and livelihoods as a result of the Thatcher decision to break the coal miners’ union by shutting down coal production in Britain and substitute it with imported coal. Forty per cent of Britain’s electricity today still comes from burning coal; approximately two thirds of the coal is imported.

Ninety five miners and supporters were the victims of a monumental police frame-up at Orgreave in July 1984, accused of conspiring to bring about a violent picket line confrontation with police. One year later, all 95 were acquitted.

Like much of the Thatcher legacy, the Orgreave frame-up has come back to haunt the ruling class. Demands are building for a full public inquiry into police actions, including the extreme violence by police and how they routinely falsified evidence and subverted the justice system.

As columnist and commentator Glen Greenwald wrote in The Guardian, the British press’ demands for reverential treatment of Margaret Thatcher contrasts with the scorn and abuse that it poured on Venezuela President Hugo Chavez following his death last month. Greenwald quotes Guardian columnist Rory Carroll who wrote, “To the millions who detested [Chavez] as a thug and charlatan, it will be occasion to bid, vocally or discreetly, good riddance.”

Greenwald argues, “Demanding that no criticisms be voiced [of the Thatcher legacy] is to enable false history and a propagandistic whitewashing of bad acts…”

I had the occasion to join the picket lines of British coal miners in 1984 and saw first-hand the exceptional police violence meted out. Since then, I have closely followed and reported news from Britain. So I appreciate the condemnations accompanying Thatcher’s death. I also appreciate the note sounded by novelist Susie Boyt in a Guardian column: “So let’s forget the “merry-oh” – dancing on a grave only disgraces the dancers… as the cuts now bite as the cuts did then, it doesn’t seem wrong to say: Wake up you sleepy head / rub your eyes, get out of bed. Let’s not take it lying down.”

British singer/songwriter Billy Bragg told CBC Radio listeners on April 13, “Rather than celebrating, we should be organizing.” Bragg didn’t argue an ‘either/or’ choice that the quotation might otherwise suggest. But he did provide a useful and timely reminder.

As my article late last year reported, the past several years in Britain have seen significant working-class forces come into action to oppose all that Margaret Thatcher and her ilk stand for, including young people who did not experience her wrath directly but are living with its consequences. These forces are slowly but surely charting a new direction for the country. Their ultimate successes will provide a fitting, final word to Thatcher’s cruel legacy. •

On April 14, CBC Radio One re-broadcast a fascinating documentary story on the final days of Margaret Thatcher as prime minister. She was brought down by a combination of a broad movement against her hated “poll” tax and opposition to her chauvinist, “Euro-skeptic” views on Britain’s place in the European Union. Listen to the 17-minute story here.