Greece, Syriza and the Struggle Against Austerity

An interview with Dimitra Maragoudaki and John Milios,
members of the Central Committee of SYRIZA

Ingo Schmidt (IS): The economic and political crises in Greece were headline news for a couple of years. An explosion of sovereign debt, caused by an uncompetitive private economy and a bloated public sector, was presented as cause of the recession; spending cuts, privatizations, and labour market deregulation as its fix. More recently, Eurocrats and international financiers are saying that these measures put Greece on the way to sustainable deficit levels and rising competitiveness. Is the economic crisis coming to an end? Did capitalists from Greece and other countries get the profit boost they wanted and relax the pressure on wages, working conditions, and the welfare state? 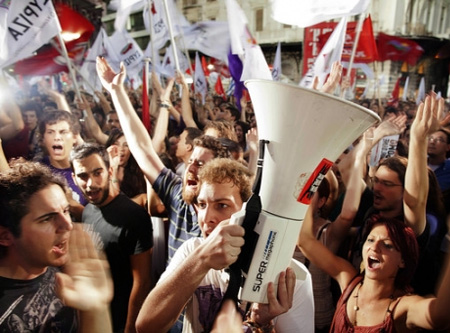 Dimitra Maragoudaki and John Milios (DM and JM): It seems that the so-called internal devaluation has not yet reached its limit. Both the Troika [European Commission (EC), International Monetary Fund (IMF), and the European Central Bank (ECB)], and the Greek government seem ready to push for more spending cuts, wage cuts and privatizations of public assets. The problem with the latter is that most of the profitable public enterprises in Greece have already been privatized. So now they want to privatize the remnants and to sell buildings and land. The prices, due to the crisis, are very low and this fact adds to the protests and political and social pressure they face as they move on with this policy. Mr. Manitakis, the minister responsible for the public sector and member of the “Democratic Left,” declared recently that only what is not profitable will remain public. He practically meant that the welfare state shall be abolished.

IS: Do you think the crisis was a welcome lever to push for austerity measures the Greek government otherwise would not have been able to pursue? Or were rising risk-premiums that triggered the sovereign debt crisis even instigated to produce such a lever?

IS: Economic decline and austerity policies were accompanied by a series of mass demonstrations and strikes? Who was most active in organizing them and who were the participants?

DM and JM: Even if it seems paradoxical, the truth is that most of the massive events were spontaneous, grass root movements. Political parties and groups embraced them but did not create them. When we come to strikes the picture is different. Organized trade unions decide for them, but again I believe that if they did not face so fierce pressure from below they would not have been so active. The participants are mostly the working and unemployed majority of the society. Young people naturally participate more than the elderly and they are more dynamic. Women’s participation is also impressive in the street demos.

IS: What were the effects of the anti-austerity mobilizations? Would the austerity measures imposed by the ‘Troika’ be even harsher without them?

DM and JM: The most important result until now is the creeping disintegration of the political system as we used to know it. People imposed the national elections of May 2012. They overthrew Papademos’ “technocratic” government. Capital and the “intertwined” with it mass media loved the government of this banker, they thought that the restructuring should be accelerated. But the people put a brake to their plans. Through these national elections the Coalition of the Radical Left (SYRIZA) was raised to the major opposition in the Parliament. Now we are in the next stage, people have to overthrow the Antonis Samaras government or else the situation will worsen rapidly.

IS: Advocates of austerity often presented these policies as tough medicine producing long-term health. Anti-austerity protests show that the people who are expected to swallow that medicine are anything but convinced by this message. But what are the alternatives a government in Athens can pursue?

DM and JM: They say that there is no alternative (TINA). People now have understood that their only alternative is to struggle in order to stop the restructuring. First priority is to stop this catastrophe. A left government would lean on these struggles in order to pursue a different policy. This policy is different not only in terms of management of the debt, but also in terms of strategy. [SYRIZA’s economic programme is available here at www.left.gr.]

IS: SYRIZA, the radical left party in which you are active, mobilizes around alternatives to austerity. Polls show the party as a frontrunner for the next election but also that it would probably need a coalition partner to form a government. Who would that be?

DM and JM: It’s not easy to answer this question right now. Whenever there is going to be the next election, a next stage of the disintegration of the political system will take place. So we believe that there are going to be possible partners through this reshuffling of the political scene.

IS: Is there a danger that SYRIZA’s policies would be sabotaged in a coalition partner just to discredit the radical left? Or is there a danger of co-optation that would pull SYRIZA into the centre-left, where it would advocate for some kind of sugar-coated austerity as social democratic parties all over Europe do?

DM and JM: If SYRIZA cannot stop the austerity, it will lose power immediately. We are very well aware of this fact. If the social struggles are not powerful enough to support the political changes that SYRIZA is planning to put forward, then there is going to be either a resurrection of the old political scene, or a transformation that will enable the political system to keep the content of the current policy, even if it has to present it with a different form. We are determined to stick to our program, to fight along with the working people and the unemployed, to put forward a democratic transformation of the country to the benefit of the social majority.

IS: As I understand it, SYRIZA considers the neoliberal design of the EU as one of the key factors causing the crisis in Greece and thus argues for changes on the EU-level. What would Europe after neoliberalism look like?

DM and JM: This is our dream. A totally different European Union based on the solidarity between the working majorities of the countries that participate in it. In terms of institutions a European budget is of utmost importance in order to proceed to this direction. We know that right now it seems a little bit unrealistic to talk about this kind of European Union, but we live in the conjuncture of a systemic crisis of capitalism, the historical time is condensed, and I believe that the dynamic of change is being accumulated in a fast pace.

IS: How can, in your view, left parties and other progressive organizations and movements in Europe, support SYRIZA’s struggle for alternatives?

DM and JM: The best way to help is to participate and help the struggles which occur in everyone’s countries. What is important is to struggle against austerity everywhere, which is how solidarity is produced in practice.

IS: One major problem in building a European movement against austerity seems to be that many people in debtor countries see the crisis as one caused by foreign domination while many in creditor countries fear that what they consider as ‘their tax monies’ is wasted on bailout packages for apparently undeserving debtors. In short: The Euro crisis produced nationalist sentiments all across Europe. What are your thoughts on overcoming such sentiments?

DM and JM: I agree with you! That’s why SYRIZA tries to explain to the peoples of Europe that austerity is a dead end. People from North Europe are correct to criticize their governments about the tax money they spend to save the Greek banks but not the Greek people. What is important is to stress the difference between the interests of banks and big capital in general and the interests of the masses of working and unemployed people. I think that taking into account the severity of the crisis, nationalism is not as high as it might be expected to be. People shout “we are all Greeks,” precisely because they understand that if the Greek people continue to suffer and to loose political battles, their turn is coming soon. •

Dimitra Maragoudaki is a member of the Central Committee of SYRIZA.

John Milios is Professor of Political Economy, National Technical University of Athens, and member of the Central Committee of SYRIZA.