After years of strategic dialogue and an arduous process of electoral inscription, Puerto Rico can now count on an organized alternative, a political party that is committed to defending the interests of the working-class and marginalized sectors of the island’s population. On November 6, 2012, the new Working People’s Party (Partido del Pueblo Trabajador, PPT) will run 71 candidates, from governor to members of the municipal legislative assembly. “Breaking the electoral barrier” and “Puerto Rico should be governed by those who sweat for it” are the slogans that the PPT brings to the 2012 elections. 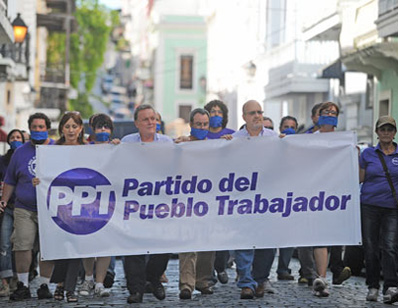 The PPT represents a radical break with traditional politics on the island, as it welcomes people who believe in social justice, democratic rights, (local) sustainable development and environmental protection, independently of the
positions that individuals may hold concerning the country’s political status.

Since 1950, the three conventional electoral choices were distinguished according to their line on the relationship that the 3.6 million residents have with the United States: colonial status quo by the Democratic Popular Party (PPD), full annexation into the United States by the New Progressive Party (PNP) and full sovereignty establishing a republic by the Puerto Rico Independence Party (PIP). Only the first two – annexation and the status quo parties – have ruled the island; voters have historically alternated their allegiance according economic performance and street crime issues.

Following the economic downturn experienced since the late 1990s, however, the PPD and PNP have become indistinguishable as both have proposed exclusively neoliberal
measures such as privatisation, and both have demonstrated equal levels of corruption. In addition, these two parties have seen to it that most local
businesses go bankrupt in the face of corporate giants who use cheap labour in other countries and sell products that can easily be produced on the island.
Multinational corporations generate over $30-billion (U.S.) in profits annually from island manufacturing operations, mostly in the pharmaceutical sector, without paying taxes to the local government. Neither of the two traditional ruling parties propose even a modest tax on corporate earnings. Furthermore, while the country continues to fall into economic depression, with over 200,000 workers emigrating to the continental U.S. in search of jobs over the last three years, politicians of both parties have passed legislation favouring the dismissal of thousands of public servants and the privatisation of public services.

Puerto Ricans may recall previous efforts to form political alternatives, whether on the streets or at the polls. In the 1970s, the Marxists-Leninist and pro-independence Socialist Party of Puerto Rico (PSP) won more than 10,000 votes for their gubernatorial candidate Juan Mari Bras, who later in 1980 won 50,000 votes while running for the Senate. That last experience of building a mass left party degenerated into factionalism, as debates on priorities – organizing and mobilizing workers versus avoiding annexation – pitted the organization’s cadre against each other. Since then, no serious electoral alternatives have
been developed.

Throughout the 1990s, left politics and radicalism were shaped on the streets among a wide array of social and environmental movements including trade union struggles
against privatisation, students in defence of the public University of Puerto Rico (UPR), against militarisation, and in marginalized communities against gentrification.

Now, out of the social struggles that have sprung from more than two decades of neoliberal attacks, economic downturn and escalating social violence, the PPT has been born. The initiative was taken by socialists who were active in trade unions, women’s organizations, environmental groups and university students. The decision to build a mass party that breaks with the current political culture and institutes a program not on ideological labels but on real concrete proposals for change, was welcomed by broad sections of the working-class, including students, ecumenical groups, small and surviving businesses, and those concerned with human rights, agriculture and police violence.

Those who founded the party understand that the political status of Puerto Rico will
not be solved by the elections but by the mobilization of the country’s working-class, and it is the demands of the working-class that will shape the contours of the future.

The party’s list of candidates is refreshingly young and diverse, and both legislative as well as executive posts are in the new party’s sights. In the
capital city of San Juan, the PPT is running 31-year-old filmmaker and community activist Tito Roman Rivera for mayor. Born and raised in public housing and a graduate of the University of Puerto Rico faculty of education, Tito has won the respect of his peers, many grassroots organizations, world-renowned artists
such as the Latin Hip Hop trio Calle 13 and the entire university community due to his long history of activism on campus. His political career began when the
entire country was mobilized between 1999 and 2003 against the U.S. Navy presence on the island of Vieques.

Tito is supported by candidates for the local and national assemblies, Rene Reyes (28) and Nicole Díaz González (26), who both studied at UPR as well, and come
from working-class backgrounds. Running for the municipal legislative assembly is 23-year-old Shariana Ferrer Núñez, a sociologist and queer activist who has
been essential in raising public awareness on violence against women and the LGBTQ community.

Beyond the metropolitan area, a number of independent candidates have joined the ranks of the PPT; 10 are running for mayor in their respective municipalities. Among them is Laylanie Ruiz of the industrial town of Barceloneta, who founded her own local, anti-neoliberal/anti-discrimination and eco-friendly party, Echo of the People (Eco del Pueblo). The requirements for forming an alliance with the PPT are accepting basic class principles, being in favour of women and minority rights and non-alliance with either of the two dominant political parties.

At the national level, the PPT has Rafael Bernabe as their gubernatorial candidate. Long-time activist and public intellectual Bernabe, taught and conducted research at the UPR department of Hispanic studies. He is a prolific writer, authored many books, including the ground-breaking Puerto Rico in the American Century: A History Since 1898 (with Cesar Ayala), and an ear-capturing orator who since the electoral campaign began in July has buried all other candidates in their political contradictions in televized debates. His stances on abortion, unionisation of both the public and private sectors of the economy, gay marriage and the legalisation/medicalisation of the country’s drug problem in order to combat drug trafficking are solid and consistent. His platform consists of defending the working-class and getting the state to revitalize the local economy in the face of manufacturing industry relocating away from the island. This means supporting agriculture, cooperatives, small businesses and a democratized system of higher education that speaks to country’s economic needs. Bernabe is an ardent defender of immigrant rights.

Bernabe is joined by his colleague Felix Cordova, who is running for resident commissioner in Washington DC, teachers’ union activist Eva Ayala, who is running for representative in the legislature and Ineabelle Colon running for senator. Also running for senator is Ruthie Arroyo, a feminist lawyer and human rights activist from working-class Bayamon, just outside the capital city. Arroyo has been active on issues concerning women’s rights and sexual diversity, opposing police brutality and community advocacy.

Others on the Left

In the coming elections the PPT is not the only party challenging the historical bipartisan dictatorship. Just as he did during the last elections, in 2008,
engineer Rogelio Figueroa will run for governor with a Greens-like party, Puerto Ricans for Puerto Rico (PPR), which emphasises citizen participation, the cleaning up of corruption, care for the environment and changes in the formulas dealing with the country’s political status. Figueroa’s campaign has been impressive in that, being black, he has marked a sharp contrast with the usual image of the island’s political leaders. However, his political program has been void of class-consciousness or any real legislative proposals.

The other alternative in these elections is the MUS, or the Sovereign Union Movement, which advocates for Free Association, the last of the three options
for de-colonisation recognized by the United Nations after independence and voluntary annexation. The problem with this party is that, again, it places
political status above class politics. Furthermore, the MUS openly supports making alliances with candidates from the status-quo PPD, which contradicts its program for breaking with the bipartisan monopoly.

In total, six parties will be participating in the elections of 2012. The general elections will be accompanied by a two-part referendum in which voters will be
asked if they want to continue to maintain the current colonial status and, second, would they prefer independence, annexation or free association. Puerto Ricans are U.S. citizens but are not allowed to participate in U.S. general elections.

According to the Marxist-Gramscian theoretician Hector Meléndez, “Out of all the political formations participating in the 2012 elections, only the PPT proposes
to construct a party of the working and popular classes, and that these classes should take control of the government of Puerto Rico.”

The language used in the campaign may sound strange to traditional pro-independence and socialist activists, as some jargon is omitted, among them: independence,
socialism and revolution. But self-determination, workers’ power and radical social change are what the PPT is all about. Perhaps the jargon has been
modified but the ideas have always been the same. And although these grand ideas lie at the heart of the PPT, its campaign goes further to tackle concrete
issues that affect the popular masses on a daily basis: unemployment, violence against women, discrimination against sexual diversity, crime, corruption, failing health and education systems.

The PPT is the party of social struggle; all its members and candidates for public office were activists before the party was formed. The PPT proposes to eliminate unnecessary government spending, like personal allowances, car allowances and bonuses for legislators. Although much of the party’s leadership come from the independence movement, the PPT understands that voters have continuously been fooled into thinking that the political status can be changed by the elections held every four years. The working-class has been divided according to empty promises of a political future with the United Sates, and neither general elections nor referendum have been capable of promoting peace and security.

The PPT leadership has been criticised by other radical groups for seeming to avoid the issue of the island’s political status, but for Nicole Diaz, “to unite
annexationists, autonomists and pro-independence workers in one party is not to ignore the status. It is in the end, another way of finding how to resolve it.”

The PPT campaign has made great advances by using social media, as well as by successfully infiltrating mainstream media. The key has been to have the
party’s candidates and militants present at every social forum and public debate possible, whether it be at a meeting of the country’s cooperative
association, a demonstration opposing the death penalty or at a forum on women’s reproductive rights.

Those working on the campaign have no illusions; it will be difficult to get more than a few municipal legislative posts, perhaps one or two representatives in Congress. At the same time, PPT militants are in for the long haul. More important than who wins the elections is the continued defence of working-class interests in Puerto Rico. The PPT leadership hopes to win at least 3 per cent of the vote, in order to keep its registration.

“Independently of who wins or who loses the elections, the rights of workers continuously need to be defended. The numeric outcomes of the elections are not crucial, what is crucial is the organization, the preparation of materials and the access to those groups –the labour movement and non-organized workers, which represent the vast majority,” says Raul Cotto, a University of Puerto Rico professor of political science. •

From Puerto Rico, Antonio Carmona Báez teaches political science at the University of Amsterdam in the Netherlands and is a member of the Dutch section of the Fourth International, Socialist Alternatief Politiek.