Quebec student leader Gabriel Nadeau-Dubois was convicted November 1 of contempt of court for publicly criticizing a court injunction issued during last spring’s student strike. The injunction ordered the strikers to allow dissident students who opposed the strike to attend classes. 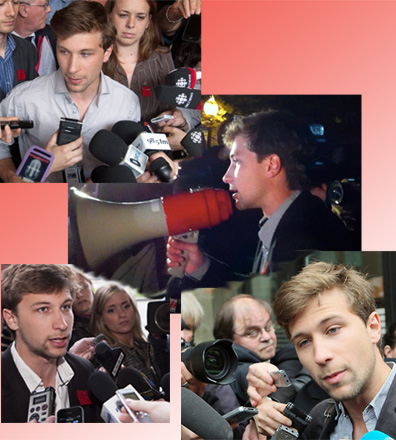 Nadeau-Dubois will be sentenced on November 9. He faces a fine of up to $50,000 and possible imprisonment for up to a year. This is the first time in the history of the Quebec student movement that a leader has been convicted of contempt of court. In a highly politicized judgment, the court declared that in criticizing the injunction and defending the democratic decision to strike made by the students in mass assemblies he had advocated “anarchy,” encouraged “civil disobedience,” and his comments could be used to pave the way to “tyranny.”

Nadeau-Dubois has announced that he will appeal the conviction, and called on supporters to donate funds to aid his defense. A web site, www.appelatous.org, has been established to publicize statements of support and collect contributions. And some solidarity demonstrations have already been held both in Quebec and elsewhere (including a small protest in Toronto on November 3).

The original injunction was issued in May to a student at Laval University who disagreed with the decision taken by the members of his student association, an affiliate of the Coalition large de l’Association de solidarité syndicale des étudiants (CLASSE), to join the massive strike against the Liberal government’s tuition fee increase.

At its peak the four-month strike saw about 300,000 students shut down classes; some of the demonstrations mobilized close to a quarter million students. Although the immediate goal of the students was to block the fee increase, the CLASSE advanced the demand for free university tuition, an initial objective of Quebec’s extensive reform of public education in the 1960s, and campaigned against other government budget measures such as a new tax on health care around an explicitly anticapitalist perspective.

Gabriel Nadeau-Dubois was a co-spokesperson for the CLASSE, which grew to more than 100,000 members during the strike. Also participating in the strike were the official student federations representing CEGEP (college) and university students, the FECQ and FEUQ.[1] All three groups are recognized under Quebec law as the exclusive representatives of the students in their respective universities or colleges.[2] All regard the right to strike – to shut down classes, enforced by mass picketing and other action – as an important weapon in their arsenal of tactics. Since the late 1960s, the Quebec students have staged seven general strikes with varying degrees of success.

The injunction in question was one of many issued by the courts in early May in an attempt to break the student strike. Many were initiated by students associated with the young Liberals, the youth affiliate of the then government party led by Premier Jean Charest. The courts were only too happy to oblige; the chief justice of the Superior Court, François Rolland, himself issued seven such injunctions, all identically worded, between May 3 and May 12.[3]

The injunction rulings all had in common a refusal to accept that the mass action by the students was a strike. Instead they called it a “boycott,” and thus not subject to the rules governing legal strikes or Quebec’s anti-scab legislation. In the case of the injunction that was at issue in Gabriel Nadeau-Dubois’ contempt prosecution, issued May 3, the judge stated flatly that the students had no real right to strike under Quebec legislation.

The premise behind these injunctions, stated or unstated, was that the students had no genuine collective interests worthy of being enforced by common strike action; they were individual consumers of a college or university education, with no right to restrict access to that “commodity” by other consumers. Neoliberal reasoning of the first order.

The student associations argued in return that injunctions restricting or prohibiting their picket lines were an infringement of their right to free expression of belief, and that their legally recognized right to represent the students could only be effective if they had the right to enforce the majority decisions taken democratically in mass assemblies of the students they represented.

In the result, the injunctions failed to break the strike, the students simply ignoring or defying them, often in the face of brutal police repression. The Charest government then enacted Bill 78 (later named Law 12), which (among other things) shut down the campuses until August and threatened severe fines and loss of legal representation rights to student associations that violated its provisions.[4]

In a television broadcast May 13, an RDI journalist interviewed FECQ president Léo Bureau-Blouin and CLASSE spokesman Nadeau-Dubois concerning the injunctions. Bureau-Blouin stated that his federation was urging students to comply with them as “precise orders of the Court….” Bureau-Blouin, a successful candidate in the September 4 Quebec elections, now sits on the Parti Québécois government benches.

“What is clear is that those decisions, those attempts to force the return to class, never function because the students, who have been striking for 13 weeks, are in mutual solidarity, and generally respecting the democratic will that was expressed through the strike vote and I think it is completely legitimate for the students to take the steps to enforce the democratic choice that was made to go on strike. It is of course regrettable that there is indeed a minority of students who are using the courts to by-pass the collective decision that was taken. But we think it is completely legitimate that people take the necessary steps to enforce the strike vote, and if that means picket lines, we think it is a completely legitimate means of doing so.”

That is the statement for which he has now been convicted of contempt of court.

A striking feature (if I may use that adjective!) of the 20-page judgment by Superior Court justice Denis Jacques is its highly charged political language. The allegation against Nadeau-Dubois is essentially that his statement to RDI was likely “to impair the authority or dignity of the court,” to cite the language of Article 50 of the Quebec Code of Civil Procedure, one of the two contempt provisions at issue. But the judge goes even further. Whether or not Nadeau-Dubois was specifically attacking the injunction in question (the judge decided he was), the student leader, in his criticism of injunctions and defense of the students’ democratic strike vote, was held to be impugning the “rule of law” and promoting “chaos.”

“Defiance of the law is the surest road to tyranny,” said the judge, quoting President John F. Kennedy, a quotation he found in what was the major legal precedent for his judgment: the court decision convicting the leaders of Quebec’s three trade-union centrals of contempt of court in 1972, when they refused to order the striking members of their common front of public sector unions to obey injunctions ordering them back to work.[5]

Adopting a similar tone, the judge found Nadeau-Dubois guilty of urging non-compliance with court orders. Was he defending democracy? No, “instead he advocated anarchy and encouraged civil disobedience.”

The shock of the contempt conviction provoked an immediate wave of protest, especially in the social networks. Many comments focused on the political nature of the court’s decision. Some cited a 2005 La Presse article showing the judge’s connections with the Liberal party.

One of the first and strongest statements of support was by Québec solidaire MNA Amir Khadir on behalf of his party. “This court decision is an insult to all the youth who mobilized last spring in a massively peaceful way,” he declared in a written statement. “Gabriel Nadeau-Dubois was the embodiment of that youth and is now punished for having put himself in the service of a cause. They have tried him politically.”

Khadir noted that Charest’s Bill 78 had specifically singled out Nadeau-Dubois: it invalidated all the injunctions issued in connection with the student strike, but made one exception – for the sole prosecution for contempt of court that had resulted, the one aimed at Nadeau-Dubois. And Khadir recalled that at the time he had publicly adopted as his own Nadeau-Dubois’s entire statement that was the subject of the prosecution.

Khadir contrasted the rough “justice” meted out so precipitously to the student leader with the lax approach taken by the authorities toward the widespread corruption in Quebec politics now being revealed in the hearings of the Charbonneau Commission. “While for years they let things ride with the bribers and their accomplices in the engineering firms, law firms, municipalities and the National Assembly, the trial of a student spokesperson who dared to stand up to a government worn through with scandals is already ended.” It was a case of “two weights, two measures.”

Québec solidaire, said Khadir, remained in solidarity with Nadeau-Dubois and the CLASSE. And he urged the student associations and others to demonstrate their support.

Unfortunately, the FEUQ and FECQ have so far made no statement on the Nadeau-Dubois conviction. Their silence underscores the divisions that have reappeared within the student movement. In contrast, the ASSÉ declared its “unfailing support” for the student leader. “The words that earned Mr. Nadeau-Dubois his conviction,” said spokesman Jérémie Bédard-Wien, “are the refrain of the entire student movement. History will prove him right.”

And several teachers’ unions have already signified their support of Nadeau-Dubois and declared their intention to contribute to his appeal. •

Richard Fidler is an Ottawa member of the Socialist Project. This article first appeared on his blog Life on the Left.

2.
An Act respecting the accreditation and financing of students’ associations, R.S.Q. c. A-3.01.

4.
The new PQ government has declared its intention to repeal these provisions.

5.
In that case, the union leaders were sentenced to a year in jail. But that in turn provoked a massive province-wide spontaneous general strike involving up to 300,000 people that included occupations of factories and radio stations, blockading of bridges and airports, and worker takeovers of some industrial towns. So great was the pressure on the Liberal government of the day that it had to ask the imprisoned union leaders (Marcel Pepin, Louis Laberge and Yvon Charbonneau) to appeal their contempt convictions so as to make it possible for the government to release them from prison and continue bargaining. The common front then went on to win some key demands, including a $100 minimum wage for the lowest paid workers, mainly women.