Waiting For a Walkout: The End of McGuinty?

For the first time since the late 1990s, a provincial labour-related education bill has angered a substantial number of Ontarians, from students to parents and, of course, teachers. Bill 115, with the Orwellian title of “Putting Students First Act”, passed into law on September 11. To no surprise, the law received unanimous support from the opposition Tories. 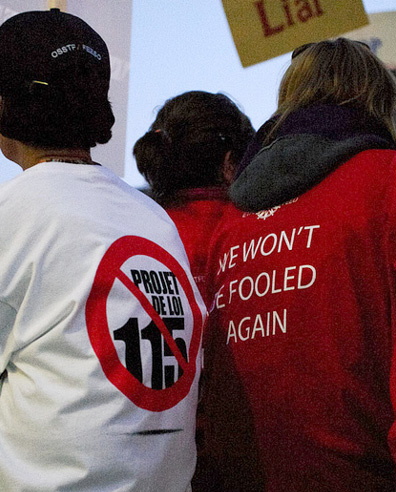 The bill effectively eliminates collective bargaining rights for Ontario’s 180,000 elementary and secondary school teachers. It imposes a two-year wage freeze, a 97-day delay on pay increments, three unpaid Professional Activity days, a halving of annual sick days to ten, and an end to the banking of unused sick days throughout a teacher’s career.

While the bill does not prevent strike votes from taking place, it provides the provincial cabinet the power to intervene to stop strikes from happening, even pre-emptively, without legislative approval. More draconian still, the new law revokes the ability of local bargaining units from freely negotiating contracts with their respective school boards. Even the school board associations, which function as managers in the education system, opposed the restrictions.[1]

Dalton McGuinty was re-elected as Premier in October 2011 with a minority government by a disillusioned electorate and record low voter turnout (49.2 per cent). Since then, he has sought to implement a series of austerity measures to balance the provincial budget, which is of genuine economic importance. McGuinty’s confrontation with the teachers marks a departure from the strategy that immediately followed the release of the Drummond Report, a document authored by a former TD economist that offered market-driven prescriptions on how to rationalize the provision of public services. The government’s strategy of cutting the deficit has developed from one designed around privatization and subcontracting, to a call for “voluntary” wage freezes. Historically, the auspices of voluntarism have been followed by threats of force vis-à-vis back-to-work and wage freeze legislation. The provincial Liberals, it seems, have not deviated from this time-honoured trend.

While the Ontario Secondary School Teachers Federation (OSSTF) and Elementary Teachers Federation of Ontario (ETFO) refused to negotiate with McGuinty, the leaders of the Ontario English Catholic Teachers Association (OECTA) did agree to a concession-based Memorandum of Understanding. Signed in early July, McGuinty has used the MOU as a blueprint for the concessions imposed on the other teachers unions through Bill 115. There should be no mincing of words: the MOU signed by the OECTA leadership sold out all Ontario teachers, including the union’s own membership. McGuinty’s drive for a wage freeze, the clawing back of collective bargaining rights, and the concentration of power into cabinet offices may soon extend further to nearly half a million public sector workers.[2]

While the OSSTF, ETFO and CUPE leaders publicly rebuked the OECTA deal, little was said about the undemocratic manner through which the deal was struck. Not only were local OECTA bargaining units not consulted by the leadership engaged in direct negotiations with the government, but the MOU was never subjected to a vote by the union’s 34,000 members. At the time, at least one local OECTA bargaining unit, composed of teachers in Hamilton, publicly expressed their disappointment with the lack of local consultation.

Since the passage of Bill 115, two forms of protest have emerged, the first being teacher and union-led action. For example, members of the OSSTF and ETFO have engaged in work-to-rule action, strike votes, and public demonstrations. The unions have also launched court challenges against the bills. The second form of protest has been a series of student walkouts against Bill 115.

In the past couple of weeks, over thirty Ontario high schools involving thousands of students have protested against the government’s legislation.[3] The wave of walkouts may have hit a peak in the last week of September during OSSTF and ETFO strike votes, but further student-led actions are being planned in cafeterias, hallways and through social media. Even elementary school students are mobilizing, with grade eight students at one Toronto public school engaging in a two-day walkout.[4]

The student walkouts represent a new degree of politicization amongst young people in Ontario. It goes without saying that the Quebec student strike is the most incredible and highly effective expression of this phenomenon. But it’s worth noting that in early March, thousands of high school students in the Lower Mainland region of British Columbia walked out against the provincial government’s attack on teachers only days before they went on strike. This degree of student support for teachers and against government should not be ignored. Nor should their example.

Labour has launched a number of court challenges against Bill 115, which is a necessary part of a broader political strategy. But, the legal route is lengthy and expensive. Nor does a court challenge function as a mobilizing tool for union membership as it channels resistance toward the courts and away from rank-and-file mobilization. And in reality, legal victories against such forms of legislation don’t prevent their reintroduction, as evidenced by the limits placed on the right of agricultural workers to engage in a binding collective bargaining process by the Supreme Court of Canada’s 2011 Fraser decision.

Despite the success of work-to-rule action used by some of Ontario’s teachers, their efforts have been disorganized and uneven. Both the OSSTF and ETFO have put the power to decide on work-to-rule action into the hands of local bargaining units, with the union leadership fearing massive fines and government reprisals if the Ontario Labour Relations Board and the courts rule the tactics as illegal. So far the unions have only “reminded” teachers that volunteer labour is not covered under existing collective agreements. This has undermined the effectiveness of work-to-rule and maintains the possibility of creating rifts within the membership.

The unions have made another critical mistake by refusing to mentor teacher candidates who are in the process of completing their required practicums. This application of work-to-rule is confusing and demoralizing for teacher candidates who are the new generation of union members and, by most accounts, are equally opposed to Bill 115.[5] To the point, a work-to-rule campaign that is not applied uniformly across Ontario will ultimately fail in challenging Bill 115 and in garnering public support. As Ottawa Citizen columnist, Kelly Egan, put it in a tough but sympathetic article, “…we’re left with the impression the union doesn’t really know what it’s doing. If this bill is so draconian that it needs to be fought tooth-and-nail, then do so. Call on all teachers to stop volunteering for extra-curriculars for two years. Period. Make a statement. Pick a hill to die on, live with the consequences.”[6] Indeed, the strike votes held in September suggest that the unions possess a strong mandate for escalating labour action. Nearly all OSSTF and ETFO bargaining units won a strike mandate of over 90 per cent![7]

With OSSTF and ETFO taking strike votes, fissures have emerged within the OECTA between the central union executive and the district-level leadership who are closer to the rank-and-file. OECTA bargaining units in Sudbury, Hamilton and Toronto are now filing complaints with the union based on the lack of local consultation. The teachers also protested the absence of ratification votes at the unit level.[8] There is little reason to believe that the OECTA members are happy with the MOU or the appeasement strategy adopted by the union leadership. Conflicts between varying levels of the union bureaucracy and the membership will continue to affect how the confrontation plays out.

Another major dimension of the conflict is the electoral front. The Liberal minority government is unpopular. Its support has collapsed from 37.6 per cent in October of 2011, to around 20 per cent. Contrast this to the growing popularity of the NDP, which has seen its ranking in the polls rise from 22.7 per cent during the election to around 30 per cent in recent surveys. Meanwhile, the Tories remain committed to their anti-union ideology by taking aim at the basic rights enjoyed by trade unions and Ontario’s workers, namely the automatic dues check-off protocol known as the Rand Formula. It is likely that the NDP will secure nearly the entire labour vote, while the Progressive Conservatives continue to feed off of the public’s fear of deficit spending and resentment toward public sector wages – two sentiments that they, and their allies in the business lobby community, have helped to generate.

The Liberal’s austerity budget and attacks on teachers might finally signal an end to the party’s strategic alliance with what is left of the pro-labour and pro-welfare state vote. During the 1999 provincial election, McGuinty was able to secure the support of teachers unions, largely because of his commitment to increased education spending. At the time, almost the entire union movement had thrown its weight behind the party most likely to defeat the Tories and end the legacy of Mike Harris’s poisonous “Common Sense” revolution. This meant abandoning the NDP, in part due to the lingering disillusionment workers and their unions still felt about the premiership of Bob Rae. It was, after all, the same year that the Canadian Auto Workers first deployed strategic voting in support of the Liberals, a practice they have since adopted in federal politics.

The question for organized labour is how best to achieve its goals. If the repeal of Bill 115, an end to austerity budgets and social program cuts are the major grievances of unions in Ontario, then these demands ought to frame the electoral strategy of organized labour in the long term, and opposition to the governing Liberals now.[9] Will such demands be placed on the NDP as a condition of electoral support? Would escalating labour disruption be pursued as both a means to stop McGuinty and to reach an agreement with the NDP for labour’s support? To what extent will public sector unions, including those representing teachers, be willing to engage in budget discussions that involve reducing the deficit and transforming the province’s economy?

Strike dates have yet to be set as school boards continue negotiating with local OSSTF and ETFO bargaining teams. Whether or not these strike vote results are symbolic gestures against McGuinty, or an actual mandate for labour action, are unknown. There’s a good chance most teachers are asking themselves the same question. •

This article first appeared on rankandfile.ca.

3.
Mick Sweetman at Rabble.ca has been diligently documenting these walkouts – “Why Ontario’s high school student walkouts give me hope.”

5.
This is based on personal knowledge of one teachers college which sends teacher candidates to both public and Catholic school boards spanning a number of towns, cities and districts.

9.
The British left and labour movement have a long tradition of writing charters – a list of demands upon which to organize and guide a political, labour or social movement. Perhaps it’s time for a charter of the labour movement – a set of goals which can be posed as demands to employers, government and parties, such as the NDP.

Andrew Stevens is an Assistant Professor at the University of Regina and a Regina City Councillor.