The Unified Communist Party of Nepal (Maoist) or UCPN(M) has been in power for just over a year. In leading government again they were hopeful they could complete a constitution-writing process that has consumed Nepal since 2008. They still talk about a socialist future, but the year in power has seen the Maoists disband their People’s Liberation Army (PLA), initiate trade deals with India and consolidate alliances with the mainstream parties. 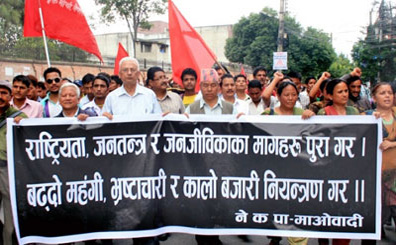 These decisions are not unconnected to the demise of the Constituent Assembly – the equivalent of parliament – in May 2012 and the UCPN’s split in June. And whereas once social divisions cut along class lines, today the debate in Nepali society is about identity and access to resources for specific ethnic groups. In the absence of a wider class project – combined with the intention to intensify capitalist development – it remains uncertain where raised ethnic tensions could lead.

When Nepal’s Constituent Assembly was elected in 2008, its primary task was to draft a new constitution, one that would promote Nepal’s ethnic diversity and protect the democratic gains secured by the uprisings of the previous two decades. The Maoists wanted a constitution that would help develop industrial capitalism but would be “oriented toward socialism” and create the basis for socioeconomic transformation.

This strategy has been an abysmal failure for poor and working people in Nepal. The Maoists have been drawn into consensus-based politics wholesale; in practical terms the pressures of engaging in mainstream politics have meant compromising on almost every political principle they once upheld and for which they had mass support.

They were also willing to compromise with the mainstream political parties over the constitution but failed to reach agreement over the names, boundaries and mechanisms for restructuring the country along federal lines. It appears that the mainstream parties aim to block even the limited change that proposals for federalism offer. The constitutional deadline was extended several times over the years; last May the Supreme Court ruled that it could not be extended again.

In response to these failures a large minority of the most militant Maoists led a split and formed a new party. Although the official split took place in June, the factions had been operating as separate parties long before the split, with a left faction arguing that the Maoists would never be able to implement a consensus-based constitution that would at the same time reflect the aspirations of the majority of Nepalis.

Calling itself the original Communist Party of Nepal (Maoist) (CPN-M), the new party took a serious number of cadre and central committee members with them. Beyond the ranks of the UCPN, however, they don’t seem to have made much of an impact. The CPN has not registered with the Election Commission, waiting until after their first congress in January to finalise what is hoped will be a distinct political line.

Since the collapse of the Constituent Assembly, and then the split, Nepal has been in a strange kind of political limbo, with no constitutional deadline looming and the most popular party in Nepal’s history reeling from an internal crisis.

Earlier last week – in an ironic repetition of history – the newly formed CPN submitted a 70-point demand to Prime Minister Baburam Bhattarai. In 1996, Bhattarai himself – as leader of the United People’s Front of Nepal, a mass front that boycotted the 1994 elections – had handed a 40-point demand to then Nepali Congress Prime Minister Deuba days before launching the 10-year people’s war.

Demands back then included the abrogation of the 1950 Nepal-India Treaty, an end to all racial and regional discrimination, and cessation of the work of NGOs as agents of imperialism. In addition to the original demands, the CPN is calling for the scrapping of the controversial BIPPA trade deal between India and Nepal, ending rampant corruption in all sectors of society and banning vehicles with Indian number plates in Nepal.1

Before submitting the demands, top CPN leader CP Gajurel led a protest through the streets of the capital, declaring that further peaceful protests were planned to put pressure on the government. Mohan Baidya, chairman of the CPN, said the party would start a new people’s war if the demands were not taken seriously, but that preparation for war would take time.

But there is little evidence that a new people’s war would have mass support. Rather, the situation seems to require an entirely new strategy for galvanising opposition, one that appeals to the mass of the population but on the basis of unambiguous class politics. Recent history has shown that mass movements in Nepal bear fruit – it was the 2006 movement that ultimately brought down the monarchy.

The CPN criticises the UCPN for compromising on revolutionary principles but the CPN itself wants to organize a roundtable conference involving parties from across the political spectrum – including the right – in order to forge consensus on a constitution that would oppose feudalism and foreign dominance. This is hardly the kind of radical break from the old political line that is needed.

This has always been the political line of the U.S., its regional ally India and the other donor governments working for ‘peace and development’ in Nepal: set aside differences, work together for consensus and respect the rule of law, even when the rule of law allows daily atrocities to be committed against the vast majority.

This strategy, backed by the ruling classes in Nepal, was aimed at containing the revolutionary process and stifling the possibility of real democracy. It could claim victory when the Maoists signed the peace agreement facilitated by India in 2006. The Maoists were rewarded with positions of power, and finished off the movement more efficiently than the imperialists might have done otherwise.

The U.S. has recently expressed its endorsement and gratitude by taking the UCPN off their terrorist list. In a further humiliation for the UCPN, former Congress Prime Minister Deuba dared current Prime Minister Bhattarai to fulfil the demands of the CPN.

While the CPN is conscious of the UCPN’s retreat, and claim to have split from the party on the basis that they had abandoned the revolution and an anti-imperialist stance against India, the CPN remains as much a part of the political mainstream as the other parties. If they intend to soberly assess the mistakes of the past, they show few signs of developing an entirely new revolutionary strategy.

Where is Nepal going?

Last Wednesday nine student unions called a general strike to protest against fuel price hikes. They called it off after a few hours to mourn the death of Ram Raja Prasad Singh, an anti-monarchy leader who claimed responsibility for the 1985 bombings in Kathmandu against the dictatorship at the time. Meanwhile, the CPN called a half-day long nation-wide general strike two days later to continue the protest against fuel price hikes.

Mainstream politicians, including those in the UCPN, obsess over the constitution as the panacea. In the process they have created a myth, accepted by many, that once the constitution is written peace and stability will reign. For ordinary Nepalis nothing could be further from the truth.

The constitution will be written but a new politics is needed that is grounded in the interests of working people and the dispossessed, not predicated on collaboration with mainstream parties that represent the interests of Nepali and international business. As long as the movement remains demobilized – obstructed and moderated at every opportunity by the left themselves – Nepal cannot begin anew. •