Class Struggle in the Philippines

On August 2, Pete Pinlac of the MAKABAYAN labour and political center in the Philippines spoke at a public forum hosted by the Vancouver and District Labour Council (VDLC). It was an extremely informative and inspiring event that reflected years of crucially important solidarity outreach by the Labour Council that began in 2008.

As explained at the forum by former VDLC President Bill Saunders, in 2008, the labour group organized a delegation of union activists to visit the Philippines and learn about its militant and embattled trade union movement. The delegation returned inspired by all that it learned. It resolved to do something in support of the workers and activists they met. The result has been a rich and rewarding relationship. 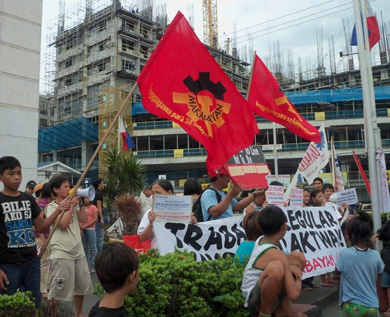 Pinlac is a leader of the Movement for National Democracy (KPD) and its trade union wing, MAKABAYAN. He is on a speaking tour to Vancouver and Toronto, Canada hosted by the trade union movement and the progressive Filipino community.

His talk in Vancouver began with a summary of the current political and economic situation in the Philippines. Workers and peasants in that country are facing unprecedented difficulties and hardships. The world economic crisis has hit the country hard. As in so many other economically deprived countries, workers and peasants are the victims of capitalist investors who shift their capital from one country to another, looking for the cheapest labour costs, cheapest natural resources and friendliest legal and labour-relations regimes.

Unions in the Philippines are meeting this challenge with a strong spirit of struggle and national resistance. Pinlac described the situation of factory workers and service workers and the diverse trade union movement that is leading a struggle for better conditions amidst difficult challenges.

Of the approximately 41 million workers, peasants and informal workers engaged in economic activity in the country, only 3 million are organized in unions or associations. The minimum wage is a harsh $11.50 (U.S.) per day.

In the telecommunications industry, where companies such as Canada’s Telus operate call center activity and where manufacturers locate assembly work, bosses face pressure of possible unionization and so the daily wage is higher than the minimum, around $15-$16 per day. But only 6,550 of the 800,000 workers in the industry are unionized. Here, as in other industries, the use of ‘sub-contracting’ of labour hinders union organizing. The large, multinational corporations avoid their responsibilities as employers by denying that they are the ones actually hiring and paying workers.

Sub-contracting is a big issue at the Hanjin Shipyard on the northern tip of Subic Bay. The shipyard is the fourth or fifth largest in the world and employs 21,000 workers. The company tries to duck its responsibilities to its workers by conducting its hiring through a sham ‘third party.’ MAKABAYAN and other unions are engaged in a tough battle to organize the workers into a union. An application is presently before the labour relations agency of the federal government.

This year, a very encouraging step was taken by unions. Nagkaisa is an initiative that brings seven of the eight existing union centrals (not including the KMU) into one, coordinating body. Some 40 workers organizations are affiliated. The key issues for which Nagkaisa is fighting are higher wages, job security and against labour contracting. The formation of the group was celebrated at a large rally march in Manila on May Day.

Pinlac reported that one of the lessons that the union movement in the Philippines has drawn from recent experience is the need to organize unions on an industry-wide basis. To that end, MAKABAYAN formed the Communication Workers of the Philippines to focus on that industry. It has 6,850 members.

Another of the issues that MAKABAYAN and the rest of the movement takes seriously is a fight to protect and enhance the natural environment. It has formed People Working for Environmental Development and Education (PWEDE), which conducts education and advocacy activity, including among young people.

PWEDE was part of a campaign that succeeded in stopping the proposed opening of the Bataan nuclear power plant, located near Manila. The Bataan plant was completed in 1984 but never became operational due to the international political fallout from the Chernobyl nuclear disaster in 1986. Pressure to open it for operation was on the rise in recent years, but the Fukushima nuclear disaster in Japan has put a definitive end to that.

PWEDE is part of the movement in the Philippines now seeking to stop the expansion of coal-fired electricity plants.

Pinlac was asked during the discussion period about the movements in the Philippines that have conducted armed struggle against the government or continue to do so. These include the Islamic-inspired political movement fighting for national self-determination in the Mindanao region (south) of the country and rural guerrilla units of the Communist Party of the Philippines.

He replied, “My philosophy is that if armed struggle is needed to protect people from the violence of the government, this must come from the people themselves.” He said that the country has a bad history of armed groups with too little relationship to the population they claim to be defending. The government has exploited this with extreme violence against peasant and other social movements.

Pinlac provided several examples of groups whose members have been murdered by the Philippine army or by right-wing vigilantes for the simple act of providing political guidance or mentoring to peasant movements. The Philippines is considered one of the most dangerous countries in the world for union organizers.

The Philippine left has been through a period of great reflection and recomposition over the past two decades. Some of that history is captured in a 2010 book, First Quarter Storm by Sonny Melencio, a former leader of the Communist Party of the Philippines and now a leader of the Partido Lakas ng Masa (Party of the Masses), founded in 2009.

“We come from the fallout of the mainstream left,” Pinlac told the forum in Vancouver. Workers in Canada have much to learn from this rich history.

The solidarity program of the Vancouver and District Labour Council with MAKABAYAN and its affiliates and allies is continuing. It provides crucial funding for the modest living expenses of union organizers. VDLC President Joey Hartman, who chaired the August 2 forum, encouraged union activists at the meeting to get their unions involved in supporting that program.

Pinlac ended the meeting by citing the famous call to action of Cuban revolutionary Ernesto Che Guevara, “Hasta la victoria siempre (On to our final victory)!” • 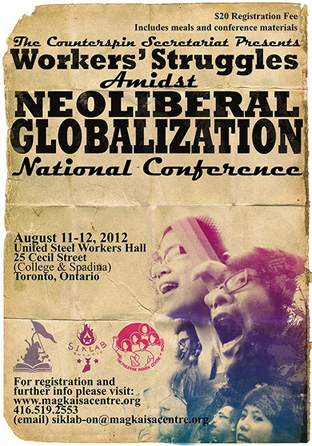 Jose Eleuterio (Pete) Pinlac will speak at a public conference in Toronto on August 11 and 12 organized by The Congress of Progressive Filipino Canadians (CPFC) and its allies. The theme of the conference is:

It will take place at the Steelworkers Hall at 25 Cecil St. Pinlac will speak as part of a panel discussion on August 11 at 1 pm.

Facts on the Philippines: