It was timely that the eighth anniversary of Super Typhoon Haiyan1 was smack in the middle of the COP26 climate negotiations. The tragedy shines a light on the overwhelming impacts of global warming. Climate change created Haiyan, one of the most powerful cyclones to ever make landfall, resulting in more than 6,000 deaths and an estimated $5.8-billion (US) in damage in the Philippines.

Other than powerful storms, the country is extremely affected by flooding, El Niño, droughts, dry spells and extreme heat as a result of environmental degradation. Still, the Philippines’ particular location means that more tropical cyclones (about 20 a year) enter its area of responsibility than anywhere else in the world. But the typhoons are getting more powerful and destructive. The Philippines contributes a minimal amount of greenhouse gas (GHG) emissions to the worldwide total but is disproportionately affected by the environmental crisis. Thus while industrialized countries are principle contributors to global warming, its impact is gravely felt elsewhere, mainly in the developing countries. 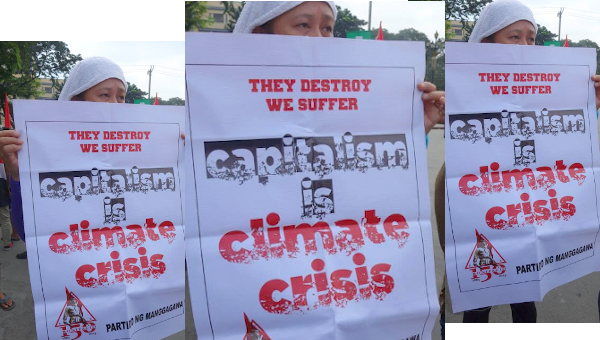 The Impact of Global Warming

In the COP26 negotiations, climate vulnerable countries led the call for funding for loss and damage created by ecological crisis. The loss and damage funds would be separate and distinct from the financing for climate adaptation and mitigation. The call is proving to be controversial due to resistance from ‘Global North’ countries, which will bear its costs and where the fossil fuel companies are headquartered.

Nonetheless this demand is utterly rational from the experience of the Philippines. Less than 1% of global GHG emissions is contributed by the Philippines but the country is ranked second in the Global Climate Risk Index of 2020 (Eckstein et al. 2019). From 1996 to 2015, the country was the fifth most affected by global warming. The cost was $2.5-billion (US) per year and one death for every 100 000 people. About 20% of GDP was shaved by climate events (Verzola, Logarta and Maniego 2017). The country is notable for being affected while still recovering from the previous year’s disaster. At the height of the pandemic in 2020, three powerful tropical cyclones ripped through the country and left a wake of devastation that aggravated the hardships brought about by the failed Covid-19 response of the government of President Rodrigo Duterte.

The Philippines is at risk from coastal erosion due to sea rise and 51% of coastal wetland may be lost by 2100. The Coral Triangle includes the Philippines and is vulnerable to bleaching as a result of sea warming. Some one million Filipinos are reef fishers and are affected by climate change (Potsdam Institute 2013).

Burning fossil fuels not only accelerates global warming but also exacerbates air pollution, which is the most direct link between climate change and health conditions. It is estimated that there were 11 000 to 27 000 premature deaths in the Philippines in 2018 due to air pollution (Farrow, Miller and Myllyvirta 2020). But the short-term solutions to air pollution are also the answers to the environmental crisis: clean public transport, renewable energy and more walking and cycling. This implies phasing out coal, oil and gas power as well as diesel and petrol cars.

Another effect of global warming is intense heat. Extremely hot days lead to increasing incidence of heat exhaustion, heat stroke and even death, which gravely impacts the elderly and the poor. In terms of the economy, intensely hot days lower agricultural production, hike electricity demand and worsen drought and fire. Workers usually slow down work or reduce work hours. Either way this leads to less productivity and lower pay.

According to the UNDP, keeping global warming at 1.5°C rather than 2°C reduces heat waves by one a month for every year, slows increase of extreme rains in Southeast Asia by 10% instead of 7%, lessens reduction of work hours due to heat from 2% to 1%, and keeps GDP decrease to 0.4% by 2040. The economic and social benefits of limiting global warming are clear. However, economically and politically powerful fossil fuel corporations have a vested interest in blocking urgent climate action. Governments beholden to these business interests have stalled the progress of climate talks since the 2015 Paris Agreement.

The Philippines is just one of eight countries to have a Nationally Determined Contribution (NDC) that matches with the commitment to keep global warming below 2°C. The Philippines committed to reduce its GHG emissions by 70% compared to the business-as-usual scenario by 2030, subject to funds from the Paris Agreement (Just Transition and Equitable Climate Action Resource Center n.d.). The sectors where GHG emissions will be aggressively cut are in energy, transport, waste, forestry and industry. Yet the Philippine government’s practice falls short of its promises. Unfortunately, this failure to follow through on commitments is true of almost all countries.

The Philippines has a substantial set of laws and rules on climate change, from the Clean Air Act of 1999 to the Green Jobs Act of 2016. Yet ultimately, policy must be judged by deeds not words. By November 2020, the Philippines had not met its NDC (Just Transition and Equitable Climate Action Resource Center n.d.), despite the fact that Covid-19 radically slowed down the economy and a moratorium on new coal plants declared in October 2020 will decrease GHG emissions. Implemented and planned policies will not lead to achieving the Philippine NDC.

The disconnect between pledge and policy can be seen in the Philippine energy sector. The power sector generates the largest share of GHG emissions: it is 52% of the total as of 2018 (Tiu 2021). Economic growth sustains an increasing demand for electricity, whose generation is heavily dependent on fossil fuels. The share of fossil fuels such as coal, oil and natural gas from 1990 to 2016 was lowest in 1990 at 55%, and highest in 2016 at 76% (Verzola, Logarta and Maniego 2017). Despite the Renewal Energy Act of 2008, growth of fossil fuels in energy production is greater than growth in renewables. The share of renewable energy such as geothermal, hydro, solar, wind and biomass is in decline even as most fossil fuel is imported. Yet the Philippines has huge renewable energy resources which can supply all of its demand for energy.

The Department of Energy (DoE) under the Duterte administration is taking the high carbon option instead of the low-carbon road enunciated in the Philippine NDC in the Paris Agreement. This is because the DoE insists on cheap electricity and disregards the NDC. Further, the privatization of the electricity sector constrains the hand of government as the profit motives of the private sector are in play.

As in the global context, the interests of big business conflict with the imperative for climate action in the Philippines. There is evidently a class angle to the problem of climate justice. The companion article to this one – GLC 421, by Xhafa, Anderson and Herberg – delves further into the nexus between class and climate and provides a glimpse into the union response to the environmental question. The article reveals the complexity of the problem of climate and jobs but points out how innovative union responses lead the way forward.

The poor are disproportionately affected by the worst impacts of global warming while the rich are more resilient and able to adapt. To cite one example, many urban poor reside along rivers and waterways that are frequently flooded, unlike the gated villages of the rich. The well-to-do can temporarily relocate to hotels but the impoverished are hauled to public schools and basketball courts with rudimentary care packages. Thus the climate movement must involve the workers and the poor as much as students. Climate advocacy will be strengthened by the voices and movements of the working class. The opposition from vested interests can be overcome by a robust climate movement that leverages the power of the workers and the poor, and merges it with advocacy against social inequality. This is a key challenge for climate action in the Philippines and arguably elsewhere. •

Benjamin Velasco is an assistant professor at the University of the Philippines (UP) Diliman School of Labor and Industrial Relations, co-convenor of the Alternative Development Program of the UP Center for Integrative and Development Studies, an online tutor of the Global Labour University Online Academy and a member of the labour group Partido Manggagawa.