An Incomplete Victory or the Beginning of the End for Ford Nation?

Does the 2012 City of Toronto budget represent an incomplete victory for the Rob Ford Administration or is it indicative of its impending demise? It really depends on how you look at it. The tax and service cuts of the first year of Mayor Ford’s term remain in place. While I won’t rehash them all here, some crucial ones include: eliminating the $60 vehicle registration fee (a loss of $64-million in annual revenue); freezing property taxes for 2011 (a loss of about $50-million tied to inflation); an $80-million pay raise for police officers; contracting-out a portion of waste collection and simultaneous cuts in service level provisions (about $57-million) and increases in user-fees ($23-million). As a result of the previous Miller Administrations $370-million budget surplus, Ford was able to delay the realities of his platform for at least one year. Keep in mind, of course, that these cuts followed on the heels of various service cuts and negative distributional shifting of taxes away from business enacted during the years of Mayor David Miller. For example, user-fees were raised by $16-million alone in 2010. Neoliberal urbanism was already firmly embedded in Toronto well before Ford came to power.

A Loss for Ford?

The 2012 operating budget stands at $9.4-billion, with the City’s capital budget at $2.8-billion. While the latter sum goes mostly toward maintaining existing facilities, the former consists primarily of all provincially-mandated services and programs that the City provides. Leading up to the 2012 budget deliberations all indicators suggested that the city as we know it was going to end. Misleading doomsday pronouncements by Ford fuelled the deficit-hysteria. In reality, however, an alleged $774-million budget deficit turned out to be a $154-million surplus. So much for the Ford Administration’s budgeting skills, as opposed to its capacity for making sheer propaganda. As councilors met to debate what was to be cut and spared, significant mobilizational efforts on behalf of such groups as Respect Toronto, Save Our Libraries, Toronto Environmental Alliance, Toronto Social Planning Council, Commitment to Community (C2C), Stop the Cuts and the Ontario Coalition Against Poverty took place. They were joined by the Toronto Labour Council, CUPE, PSAC, USW, CAW and other labour activists. This resulted in extraordinary public pressure and protests.

While all in all the protests leading up to the budget debates were remarkable, concerns remain over organized labour’s emphasis on lobbying and willingness to engage in more inventive actions and wider mobilization (such as using an area wide assembly of union stewards for campaigning). Likewise, the merit of ‘direct-action’ tactics remains a point of ongoing debate, given the tiny numbers taking this course against overwhelming police force, and general antipathy toward such actions among the public and city workers. This resulted in a quite typical division between organized labour and pockets of the radical left (although, importantly, it seems as though these barriers are slowly being broken down given the unprecedented circumstances).

The ‘hero’ to emerge in Council debates was centrist Councilor Josh Colle, duly anointed by the ever-seeking a liberal saviour Toronto Star, who unexpectedly introduced a motion to take $15-million out of the surplus and put it toward saving existing programs. One would think that reinstating 0.02% of the city’s operating budget would be a no-brainer. But not so for the Ford brothers and other hard right, like-minded councilors. Debate raged long and heavy. Doug and Rob Ford tried to coerce undecided councilors backstage to side with them. Deputy Mayor Doug Holyday berated children and parents arguing to keep pools open. Councilor Giorgio Mammoliti quipped that Colle’s reckless spending was “a slap to the office of the Mayor.” Budget Chief Mike Del Grande publically considered resigning; and the ever-ostentatious councilor Denzil Minnan-Wong called Colle’s proposal ‘soft-headed.’ After all was said and done, Council voted 23-21 in favour of Colle’s omnibus motion, and even stronger for a 2.5 per cent property tax hike (below the projected rate of inflation for 2012). But it was far from a complete victory for the anti-Fordists. The chart below outlines some of the major programs and services that were spared and cut.

Moreover, the 2012 budget adds at least another $40-million in user-fees (especially linked to the TTC’s 10-cent fare hike); and there remains notionally in place an additional target of five to ten per cent austerity on all departments. And if Ford gets his way, other things could still get worse: deferred plans to sell-off 675 affordable housing properties are moving ahead, which will leave more low income people searching for housing; the City may well move to making paramedics a full-fledged ‘essential service’ and remove their right to strike; and Toronto Hydro remains a point of discussion for privatization, marketization and a further squeeze for more profits to be delivered to city coffers (as a result of this fiscal need, Toronto Hydro already massively abuses public space through its utility ‘cuts,’ redundant poles, etc.).

There is, however, also positive development in Councils’ budget decision. Some councilors have become emboldened and come out against Ford’s earlier transit plans, and strike a re-balance between subways and LRTs (although the alternate vision often is little more than the deeply flawed, anti-subway Transit City, which failed to meet even remotely the boldness of long-standing, earlier public transit planning for Toronto). Whether the newfound bravado is temporary or more permanent remains unknown. In bragging about how the 2012 budget is lower than the previous year’s (when considering inflation), a first for new budget’s since amalgamation in the 1990s, Ford also noted how he was able to trim $370-million through ‘efficiencies’ (which really means cuts, layoffs and lower quality service provision).

Is this a significant victory or loss for Ford? The long and short answer is that it is a bit of both. What may well be a defining moment for Ford and his conservative allies on Council will be the negotiations with CUPE Locals 79, 416, 2998 and 4948.

So far through attrition, layoffs and leaving vacancies unfilled, Ford has been able to trim the city’s workforce by over 3000 workers. His stated goal is very clear: to reduce the city’s 50,000 personnel by at least 7000. This would far outweigh any immediate cuts made possible through yearly budget deliberations. This is why Ford and his allies have an obsessive emphasis on getting rid of job security. Despite Local 416 offering to freeze their wages for three years and thus freeing up some $25.5-million, Ford and his advocates have ignored the union preferring instead to re-frame the public debate this time around in terms of ‘jobs for life’ (picking up a feature of the last strike forced by the Miller administration). 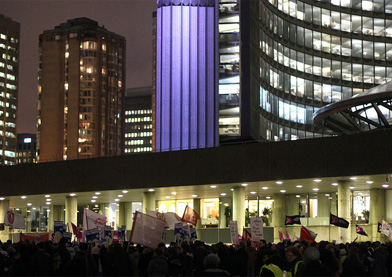 With widespread individual insecurity, mounting job losses and a deteriorating quality of work, Ford is trying to put city workers and the users of its services in opposition with one another. Ford’s argument is simple, yet insidiously straightforward: ‘We want to lower your taxes. Help me eliminate unnecessary workers who are generously well-paid by your tax dollars, and all will be fine and dandy.’ Despite the fact that eliminating decent paying jobs during a recession is quite possibly the single most counter-productive and irresponsible measure that can be taken. If enabled, Ford’s plan will lead to lower quality service provision at higher fees, less transparency and accountability, and add to unemployment. Further, contracting-out will fatten the pockets of the 1 per cent – a group which Ford proudly belongs to – despite the rhetoric of ‘efficiencies.’ The evidence from study after study suggests quite the contrary: contracting-out and privatization leads to decreased service levels, higher fees, less accountability and transparency, and constrain public administration options.

Thus far CUPE’s response has been tepid at best, and hardly united. Local 416 and Toronto Public Library Workers’ Union Local 4948 have recently taken a bolder public stance, decrying the Ford Administration’s “union busting” plans and aggressive concessionary demands. Local 79 is nowhere to be found as any hopes that new President Tim Maguire might break from past-President Dembinski’s textbook business unionism dissipate. Should Ford’s backers be successful in undermining the unions’ capacity in the workplace, conservatives on Council will have a reinvigorated mandate. Absent a strong municipal union strategy, deeply rooted in the community and forging new structural relations between the workers providing specific services and users of those services, all indications suggest Ford will continue down his hard right agenda.

The truth of the matter is that whether or not Toronto’s 2012 budget is a victory for progressives or conservatives, there are no certainties that the vague dividing line on Council will have the ‘centrist’ councilors break from the Mayor and back city workers and the various CUPE unions in the event of a strike or lockout. The way even social democratic councilors sat on the side during the ill-conceived Miller-forced strike is not promising. As such, it remains an open question whether labour and community activists in Toronto can gain an organizational footing beyond the elements of its existing constituencies. The left in Toronto is divided into such a panoply of coalitions without any coherence of strategy or programme. While the 2012 budget gives reasons for being cautiously optimistic, labour and social justice activists continue to have their work cut out for them. •