Mark LeVine, professor of History at UC Irvine, managed to catch up with blogger Hossam el-Hamalawy via Skype to get a first-hand account of events unfolding in Egypt.

Mark LeVine: Why did it take a revolution in Tunisia to get Egyptians onto the streets in unprecedented numbers?

Hossam el-Hamalawy: In Egypt we say that Tunis was more or less a catalyst, not an instigator, because the objective conditions for an uprising existed in Egypt, and revolt has been in the air over the past few years. Indeed, we already managed to have 2 mini-intifadas or “mini Tunisias” in 2008. The first was the April 2008 uprising in Mahalla, followed by another one in Borollos, in the north of the country.

Revolutions don’t happen out of the blue. It’s not because of Tunisia yesterday that we have one in Egypt mechanically the next day. You can’t isolate these protests from the last four years of labour strikes in Egypt, or from international events such as the al-Aqsa intifada and the U.S. invasion of Iraq. The outbreak of the al-Aqsa intifada was especially important because in the 1980s-90s, street activism had been effectively shut down by the government as part of the fight against Islamist insurgents. It only continued to exist inside university campuses or party headquarters. But when the 2000 intifada erupted and Al Jazeera started airing images of it, it inspired our youth to take to the streets, in the same way we’ve been inspired by Tunisia today. 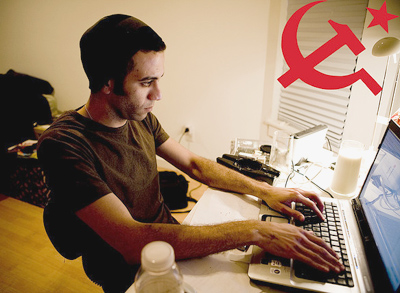 Mark LeVine: How are the protests evolving?

Hossam el-Hamalawy: It’s too early to say how they will go. It’s a miracle how they continued past midnight yesterday in the face of fear and repression. But having said that, the situation has reached a level that everyone is fed up, seriously fed up. And even if security forces manage to put down protests today they will fail to put down the ones that happen next week, or next month or later this year. There is definitely a change in the level of courage of the people. The state was helped by the excuse of fighting terrorism in 1990s in order to fight all sorts of dissent in the country, which is a trick all governments use, including the USA. But once formal opposition to a regime turns from guns to mass protests, it’s very difficult to confront such dissent. You can plan to take out a group of terrorists fighting in the sugar cane fields, but what are you going to do with thousands of protesters on the streets? You can’t kill them all. You can’t even guarantee that troops will do it, will fire on the poor.

Mark LeVine: What is the relationship between regional and local events here?

Hossam el-Hamalawy: You have to understand that the regional is local here. In 2000 the protests didn’t start as anti-regime protests but rather against Israel and in support of Palestinians. The same occurred with the U.S. invasion of Iraq three years later. But once you take to the streets and are confronted by regime violence you start asking questions: Why is Mubarak sending troops to confront protesters instead of confronting Israel? Why is he exporting cement to be used by Israel to build settlements instead of helping Palestinians? Why are police so brutal with us when we’re just trying to express our solidarity with Palestinians in a peaceful manner? And so regional issues like Israel and Iraq were shifted to local issues. And within moments, the same protesters who chanted pro-Palestinian slogans started chanting against Mubarak. The specific internal turning point in terms of protests was 2004, when dissent turned domestic.

Mark LeVine: In Tunisia the labour unions played a crucial role in the revolution, as their large and disciplined membership ensured that protests could not be easily quashed and gave an organizational edge. What’s the role of the labour movement in Egypt in the current uprising?

Hossam el-Hamalawy: The Egyptian labour movement was quite under attack in the 1980s and 1990s by police, who used live ammunition against peaceful strikers in 1989 during strikes in the steel mills and in 1994 in the textile mill strikes. But steadily since December 2006 our country has been witnessing the biggest and most sustained waves of strike actions since 1946, triggered by textile strikes in the Nile Delta town of Mahalla, home of largest labour force in the Middle East with over 28,000 workers. It started because of labour issues but spread to every sector in society except the police and military.

As a result of these strikes we’ve managed to get 2 independent unions, the first of their kind since 1957 property tax collectors, including more than 40,000 civil servants, and then health technicians, more than 30,000 of whom launched a union just last month outside of the state controlled unions.

But it’s true that one major distinction between us and Tunisia is that although it was a dictatorship, Tunisia had a semi-independent trade union federation. Even if the leadership was collaborating with the regime, the rank and file were militant trade unionists. So when time came for general strikes, the unions could pull it together. But here in Egypt we have a vacuum that we hope to fill soon. Independent trade unionists have already been subjected to witch hunts since they tried to be established; there are already lawsuits filed against them by state and state-backed unions, but they are getting stronger despite the continued attempts to silence them.

Of course, in the last few days the crackdown has been directed against street protesters, who aren’t necessarily trade unionists. These protests have gathered a wide spectrum of Egyptians, including sons and daughters of the elite. So we have a combination of urban poor and youth together with the middle class and the sons and daughters of elite.

I think Mubarak has managed to alienate all sectors of society except his close circle of cronies.

Mark LeVine: The Tunisian revolution has been described as very much a “youth”-led revolt and dependent on social media technologies like Facebook and Twitter for its success. And now people are focusing on youth in Egypt as a major catalyst event. Is this a “youth intifada” and could it happen without Facebook and other new media technologies?

Mark LeVine: As you might have heard, in the U.S., the right wing talk show host Glenn Beck has gone after an elderly academic, Frances Fox Piven, because of an article she wrote calling on the unemployed to stage mass protests for jobs. She’s even gotten death threats, some from unemployed people who seem happier fantasizing about shooting her with one of their many guns than actually fighting for their rights. It’s amazing to think about the crucial role of trade unions in the Arab world today considering more than two decades of neoliberal regimes across the region whose primary goal has been to destroy working class solidarity. Why have unions remained so important?

Hossam el-Hamalawy: Unions have always been proven to be the silver bullet for any dictatorship. Look at Poland, South Korea, Latin America and Tunisia. Unions were always instrumental in mass mobilization. You want a general strike to overthrow a dictatorship, and there is nothing better than an independent union to do so.

Mark LeVine: Is there a larger ideological program behind the protests, or just get rid of Mubarak?

Hossam el-Hamalawy: Everyone has his or her reasons to take to the streets, but I would assume that if our uprising became successful and he’s overthrown you’ll start getting divisions. The poor will want to push the revolution to a much more radical position, to push for radical redistribution of wealth and to fight corruption, whereas the so-called reformers who want to put breaks and more or less lobby for change in top and curb powers of state a little bit but keep some essence of the state. But we’re not there yet.

Mark LeVine: What is the role of the Muslim Brotherhood and how will its remaining aloof from the current protests impact the situation?

Hossam el-Hamalawy: The Brotherhood has been suffering from divisions since the outbreak of the al-Aqsa intifada. Its involvement in the Palestinian Solidarity Movement when it came to confronting the regime was abysmal. Basically, whenever their leadership makes a compromise with the regime, especially the most recent leadership of the current supreme guide, it has demoralized its base cadres. I know personally many young brothers who left the group, some of them have joined other groups or remained independent. As the current street movement grows and the lower leadership gets involved, there will be more divisions because the higher leadership can’t justify why they’re not part of the new uprising.

Mark LeVine: What about the role of the U.S. in this conflict? How do people on the street view its positions?

Hossam el-Hamalawy: Mubarak is the second largest recipient of U.S. foreign aid aside from Israel. He’s known to be America’s thug in the region; one of the tools of American foreign policy and implementing its agenda of security for Israel and the smooth flow of oil while keeping Palestinians in line. So it’s no secret that this dictatorship has enjoyed the backing of U.S. administrations since day one, even during Bush’s phony pro-democracy rhetoric. So one should not be surprised by [Secretary of State] Hillary Clinton‘s ludicrous statements that were more or less defending the Mubarak regime, since one of the pillars of U.S. foreign policy was to keep regimes stable at the expense of freedom and civil liberties.

We don’t expect anything from Obama, whom we regard as a great hypocrite. But we hope and expect the American people – trade unions, professors’ associations, student unions, activist groups, to come out in support of us. What we want is for the U.S. government to completely get out of the picture. We don’t want any sort of backing; just cut aid to Mubarak immediately and withdraw backing from him, withdraw from all Middle Eastern bases, and stop supporting the state of Israel.

Ultimately, Mubarak will do whatever he has to do to protect himself. He will suddenly adopt the most anti-U.S. rhetoric if he thought that would help him save his skin. At the end of the day he’s committed to his own interests, and if he thinks the U.S. won’t support him, he’ll turn somewhere else. The reality is that any really clean government that comes to power in the region will come into open conflict with the U.S. because it will call for radical redistribution of wealth and ending support for Israel or other dictatorships. So we don’t expect any help from America, just to leave us alone. •

Mark LeVine is a professor of history at UC Irvine and senior visiting researcher at the Centre for Middle Eastern Studies at Lund University in Sweden. His most recent books are Heavy Metal Islam (Random House) and Impossible Peace: Israel/Palestine Since 1989 (Zed Books).

This interview first appeared on the Al Jazeera English website.