Portugal: The Prospect of a Full Bailout and More Austerity Looms in 2011

A full financial bailout of Portugal involving the European Central Bank (ECB) and the International Monetary Fund (IMF) looks set to happen in the first half of 2011. This will involve severe austerity conditions being imposed on the Portuguese people by the ECB and IMF.

The indications are clearly there as at the end of 2010 Fitch Ratings joined the two other credit rating agencies to downgrade Portugal’s debt to A+ which is just above junk status. They are concerned that the current account deficit running at 9 per cent is unsustainable with the ruling Socialist Party unable to impose the effective 4 per cent budget cuts in 2011 that they outlined at the end of 2010.

The risk of this happening is seen in the dramatic increases in the price that Portugal must pay to borrow money on the financial markets – this has leapt form 1.8% per year in November 2010 to 3.4% in December 2010. The ECB is effectively carrying out an indirect bailout as it is the only buyer of Portuguese government bonds when these are auctioned on the financial markets.

The Size of the Debt

In the first half of 2011 Portugal must repay or renew $27-billion of debt and take out fresh loans of $12-billion which in total is 17 per cent of its economy (GDP). It will be unable to raise this on the financial market and the ECB will not be able to follow the current route of bond purchases as the sums are too large. These figures are likely to be worse as Fitch and many other economists estimate that the economy will go into recession in 2011 and shrink by 1 to 2 per cent because of the already planned cuts and the weakness of the Portuguese economy. This will take the debt to GDP ratio to well over 90 per cent in 2011, the third highest in the Eurozone.

A rescue package will be put together by the ECB and the IMF with them effectively controlling the economy, spending and austerity measures. These will be much more severe than those planned by Portugal’s Socialist ruling party. The IMF in their 2010 report on sovereign debt see Portugal’s public spending growing by no more than 0.5% over 20 years with the annual deficit being reduced to 6% by 2020 with 80% of the reduction happening by 2013. This can only be achieved by massive cuts in public services, wages and jobs with a corresponding rise in taxes.
Of course as we have seen in the case of Ireland and Greece this only further weakens an economy and drives the deficit wider and creates a larger debt problem which is answered by more cuts. It is a race to the bottom which will impoverish an already poor country.

While Portugal did not experience a property bubble like Spain and Ireland it’s banking sector has cross exposure to the other country’s banks in Europe which are involved in the current debt crisis: Ireland, Spain and Greece. Portuguese banks have $39-billion of exposure to the banks of these countries while the banks of these countries have $52-billion exposure to Portuguese banks. This will mean that Portuguese banks are likely to suffer losses in 2011 because of this exposure and require capital injections themselves. They are currently finding it as hard as the Portuguese government to raise money on the international financial markets. This will mean that they will need an ECB/IMF bailout similar to Ireland’s banks. 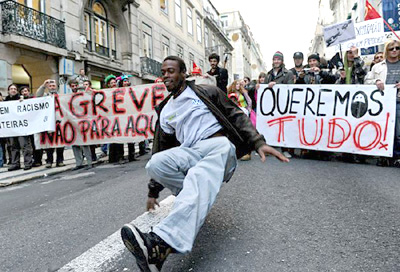 Portugal’s problems do not lie in its lack of competitiveness – a report by the World Economic Forum in 2005 ranked Portugal for competitiveness above Spain, Ireland, France and Hong Kong. It is its membership of the Eurozone that is the source of Portugal’s problems. Portugal joined the Euro at a very uncompetitive rate that reflected the strength of the German and French economies. Up until recently the Euro increased in value to most major currencies since its inauguration making weaker economies such as Portugal very uncompetitive.

Since joining the Euro Portugal has seen unemployment go from 5% to over 11% and its economic growth rates well below those of the Eurozone as whole. To compensate for the structural weakness of the Portuguese economy caused by the strength of the Euro, Portuguese governments increased its public sector and promoted personal debt to sustain demand in the private sector. As a consequence the current account deficit has been running at a near 10 per cent for several years.

The private sector is dominated by the service industries which have been hit by the credit freeze from the banks and the deep recession in Spain who are Portugal’s largest trading partner. The agriculture and fisheries industries employ 13 per cent of the workforce but make up only 4 per cent of the GDP and contribute to a low wage economy – average wages in Portugal are Euro 804 a month with the minimum wage being Euro 475 a month.

The Portuguese people are not responsible for the crisis – it is the membership of the Eurozone and the politicians that took them into it who are to blame.

An alternative to austerity for the Portuguese people is:

These measures would start to transform the Portuguese economy and to put it under the control of the Portuguese people and build a society based on meeting need and not profit. •

See the blog archive at LeftBanker.

Ralph Blake (aka TheLeftBanker) has occupied senior roles in finance for several years and maintains a blog at LeftBanker.