In 2008, when gas prices spiked, so did transit ridership, reaching 10.7 billion trips in the United States. Hard times make this service even more essential to millions of people. So the U.S. government is expanding public transportation, right? Wrong. Across the U.S., 80 per cent of transit agencies are cutting service, hiking fares, or both. Moreover, cuts are hitting hardest the people with the least access to other ways of getting around. 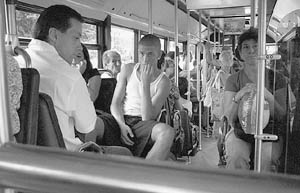 In Atlanta, where half of transit users don’t own a car, authorities are cutting service 30 per cent. The same is true in Milwaukee, where 70 per cent of entry-level jobs are at least one hour away by bus from inner-city residents who need those jobs the most.

In San Francisco, senior, youth, and disabled passes are jumping from $5 to $20 per month. “It’s unfair,” says Terri Thorpe of fare hikes in Southern California. “They are going to stick it to the little blue-collar worker who can’t afford a car.” But opposition to transit cuts is growing. In several cities, angry residents have packed public hearings; bus rider unions are escalating activity; transit worker unions are organizing protests.

Sticking it to the Poor

Before the economy crashed, transit was already under-funded. But now, with state revenues plunging more than at any time since the Great Depression, matters are going from bad to catastrophic. Most big transit agencies are swimming in red ink. A screwy federal funding formula is one big problem. For every transportation tax dollar, only 18 cents goes to transit. The other 82 cents goes to roads. On top of this, rules dictate that agencies can use only 10 per cent of federal funding for operations – running the actual system. The other 90 per cent must go to capital expenses – construction of light rail lines, equipment purchases, etc. Who gains from this? Private for-profit companies that get the lucrative government contracts.

Another problem is regressive tax structures. Logically, big business should pay to fund a service that is so essential to the conduct of commerce. Transit gets labour to work, and frees up roads for freight. But instead of being sufficiently taxed, corporate America is getting a cheap ride. For example, many transit agencies generate extra money through “public-private partnerships,” where service is designed around the needs of a specific private company or wealthy community.

Simultaneously, service is deteriorating for people who rely on transit most – people of colour, seniors, youth, people with disabilities, the unemployed and working poor. And thanks to a heavy reliance on regressive sales taxes to fund transit, those at the bottom of the economic ladder are paying more, while getting less.

On top of service cuts, agencies are saving money by cutting the pay and jobs of their ethnically diverse, highly unionized workforces. San Francisco officials want wage cuts. In New York, management plans to lay off 1,700 workers. Similar scenarios are unfolding across the USA.

So, if peaking ridership shows that people need public transit, why is government starving it? Because, like quality education, it doesn’t generate profits. Indeed, a good transit system actually threatens the profits of GM, Shell, and other corporate heavyweights by offering an alternative to the single-occupancy vehicle.

Lip service to the “green economy” gets votes for politicians. But the deepening crisis of transit funding shows where their real allegiance rests – squarely with big business. There’s no point in looking for change from either Democrats or Republicans. Look for it where it has come from historically: a working class that is in motion, organizing for change.

Mobility is a Human Right

And public transit unions are stepping into leadership of the fight. Recently, in New York, Washington, D.C., and other cities, the Amalgamated Transit Union, Transportation Workers Union, and United Transportation Union rallied to demand more funds for operations. These unions are also starting to ally with riders.

Los Angeles provided a model in 2000, when the Bus Riders Union representing mostly low-paid Latino service workers defended predominantly Black and Latino drivers striking over pay and conditions. By the strike’s end, drivers were protesting fare hikes – a big issue for their riders.

This alliance broke the pattern of some transit workers viewing poor riders as “freeloading,” and some riders blaming “high-paid” transit workers for fare hikes. These attitudes buy into the reactionary mindset that public services should pay for themselves, and let politicians off the hook. Public transit will never pay for itself at the farebox. And why should it? Transit is a public good and environmental necessity that frees up land and resources. This is how taxes should be used.

Transit unions have an historic opportunity to unite with riders and fight for transit as a human right that should be available and accessible to all. For many people it is a service as essential to life as shelter. Yet as long as profits dictate priorities, it is in constant jeopardy. Fortunately, activism to save public transit is alive, and union muscle could give it legs.

In Portland, a riders’ union is publicizing good alternatives to transit cuts. They include: thin the ranks of top-heavy management; redirect tax dollars from wars and bank bailouts to transit; tax the rich.

In Atlanta, protesters used creative tactics to oppose transit cuts, marking vehicles on reduced routes with large red X’s. Imagine campaigns like these connecting with the fight to save public education and other basic services! The U.S. can afford free quality transit for all. Winning it will require building a movement that leaves no passenger behind. •

This article first appeared on the Freedom Socialist Party website.

Linda Averill is a union bus driver in Seattle, Washington.