Gangs and Violence in Jamaica and Haiti

When police in Jamaica launched a bloody assault in May on poor neighbourhoods in the country’s capital city, news outlets in Canada responded with an ignorance and insensitivity that is all too common in their coverage of the Caribbean islands. As with Haiti, Jamaica is portrayed as incomprehensibly violent and not quite civilized. 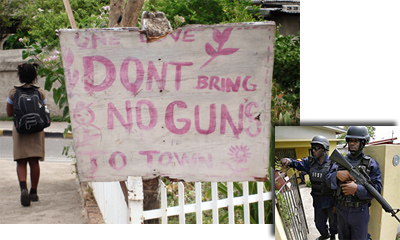 Canada’s national broadcaster aired a 20-minute story on its morning radio newsmagazine, The Current, on May 28. Neither the host nor the two guests she interviewed sounded the slightest concern when she explained in her introduction that 73 people had been killed to date by the police assault. In fact, both guests welcomed the police action. “It was long overdue,” they chimed. “Criminal gangs in Jamaica have become too powerful.”

Astonishingly, one of the guests, Philip Mascoll, a former reporter for the Toronto Star, Canada’s largest distribution daily newspaper, said that Canadians should prepare for similar police action in poor housing projects in Toronto! He prefaced his comment by saying, “People are going to hate me for saying this, but….” If the program host was fazed, she didn’t indicate.

Gangs and Government in Jamaica

Carolyn Gomes, Executive Director of Jamaicans for Justice, has a different, highly critical view of the police action. In a May 28 interview from Kingston aired on Democracy Now!, she told hosts Amy Goodman and Juan Gonzalez that for decades the Jamaican police have been a force outside the law that operates with “complete and total impunity.”

Last year, Gomes said, police killed an estimated 250 people. In the past decade, not a single officer has been charged with the deaths of any of the several thousand citizens who have died at police hands.

“The situation in Jamaica is very complex. There are no clear good guys and bad guys here or elsewhere for that matter. No ‘evil empire’ that can easily be targeted and dismantled because the very governance system of the country has for decades been sharing power, so to speak, with dons or leaders such as Dudus [alias of Christopher Coke].

“Clearly the problem arose because the formal governance system, inherited from the British, left large segments of the poor literally unrepresented and voiceless before and after independence.

“The failure to include or extend the state’s protection and support to all segments of the population created space for alternate leaders to spring up because the excluded still needed security, justice systems, jobs among other things.

“This void was filled by so-called community leaders or godfather figures who used any means necessary to provide these basic necessities for the people in their respective neighbourhoods. It takes cash to care, as a popular political slogan goes, and it was inevitable that such leaders would turn to drugs and arms running, and other illicit sources of income to support their followers in the absence of any legal methods of doing so.”

Much of the influence of criminal gangs today dates back to the wave of political violence unleashed upon the country following the election of Prime Minister Michael Manley in 1972. He headed the People’s National Party (PNP), a social democratic party that sought modest reforms to ease the crushing poverty from which the majority of the population suffers.

Jamaica’s ruling elite and foreign backers waged a violent and debilitating assault on Manley’s government and party to prevent it from implementing reforms, combining paramilitary assaults on neighbourhoods supporting the PNP with sabotage of the country’s economy. Hundreds of Manley supporters perished and Jamaica’s economy was seriously crippled. It contracted by 25 per cent from 1972 to 1980. Eventually, Manley’s government lost the national election of 1980.

The right-wing Jamaica Labour Party that replaced Manley is the very one that is in power today and that launched the murderous “anti-gang” assault in May. It is associated with criminal gangs that grew out of the paramilitary squads created to bring down the PNP government. David Rowe, a University of Miami adjunct professor and lawyer who specialises in Jamaican law, told the UK Independent that the Labour Party government and the gangs have an “almost symbiotic relationship.”

The memory and fear of the politically violent years of the 1970s and 1980s has been a considerable barrier to Jamaica embarking upon another experiment of socially progressive government. Manley and the PNP were elected again in 1989, but the party had by then abandoned any plans for radical social reform. Its rule from 1989 to 1992 proved a great disappointment to its supporters.

The rise of the PNP was part of a wave of social radicalism that swept across Latin America and the Caribbean in the 1960s and 70s, inspired by the anti-colonial and national liberation struggles in Africa and Asia, including the looming defeat of U.S. imperialism in Vietnam and the revolutionary trail blazed by Cuba beginning in 1959.

An important beachhead of the wave of radicalism was a social revolution in Chile spurred on by the election of Salvador Allende to the presidency in 1970. The bloody overthrow of Allende in 1973 by a military coup backed by the United States was a huge setback to social revolution in the region, but new victories were scored in 1979 with the coming to power of revolutionary movements in Nicaragua and the island of Grenada. These victories lent an added urgency to the U.S.-led effort to unseat Manley and the PNP.

Self-Defense is not Gang Violence

During the 1970s and 1980s, self-defense initiatives were taken by poor and PNP-supporting communities, first against the violent campaign to overthrow Manley, then against the deepening impoverishment of most working people that followed the 1980 election.

The government of Edward Seaga (popularly nicknamed “CIAga” for his close ties to successive U.S. administrations) that followed Manley implemented one of the first national programs of structural adjustment in an underdeveloped country, policies that are today termed neoliberalism.

The imperialist-imposed “adjustments” in Jamaica consisted of relaxing conditions on foreign investment and industry; opening markets to the import of cheaper, typically heavily-subsidized, food products and other goods and services; dismantling of public enterprises and services; and an accompanying drastic reduction in the living standards of the majority of the population. Not coincidentally, this is also the period when the trade and transit of illegal drugs first gained a strong foothold in Jamaica.

The community organizations and popular self-defense committees that had arisen in poor neighbourhoods in the face of the assault on the Manley government, and the new ones that arose post-1980, were obliged to assume responsibilities for social and other community services as these were progressively abandoned by the Labour Party government and its foreign backers.

The gangs that settled into a comfortable association with the Labour Party government also assumed certain measures of social role in poor neighbourhoods as part of the price of gaining territory and foot soldiers for their new-found, lucrative criminal dealings. Furthermore, with the political retreat of the PNP leaders from a radical social program, the distinction between community organizations of political/social origin and those of anti-social origin became blurred over time.

There are a lot of parallels to be drawn with the recent history of Haiti. There, mainstream media presents a superficial image of near-incomprehensible gang violence running rampant in poor neighbourhoods. This has been the one, overriding theme of news coverage by Canada’s national broadcaster and other corporate media ever since the election in the year 2000 of President Jean-Bertrand Aristide.

Yet, social violence in Haiti has come almost exclusively from the country’s elite, its paramilitary forces, and their foreign backers in Washington, Ottawa and Paris.

In his excellent 2008 book, Damming the Flood: Haiti, Aristide and the Politics of Containment, author Peter Hallward documents the violence that descended on Haiti following the 2000 election and was then intensified following the overthrow of Aristide in 2004. He draws a sharp distinction between the violent, paramilitary gangs that attacked the government and its supporters, on the one hand, and the organizations of self defense that arose in response, on the other.

Several political activists explained to Hallward, “In Haiti, as a rule, when you defend the interest of the people you are treated as a criminal, whether your name is Dessalines, Peralte or Wilme.” The latter was a community activist who was assassinated in July 2005 by UN soldiers; the former were two of Haiti’s historic anti-slavery and anti-colonial leaders.

The peoples of Jamaica and Haiti share a profound history. Their ancestors fought long and hard against the slave empires of the Americas, at times seeking alliances between each other. Haiti’s revolt against Spain, Britain and France was astonishingly successful. It wrote one of the most inspiring chapters in modern human history. Jamaica’s was not; the country did not gain independence from Britain until 1962.

Both countries have faced relentless, big power intervention in their internal affairs to prevent socially progressive government from gaining a foothold and expanding. Both are still waiting for a semblance of economic justice and independence.

From the Jamaican and Haitian experience, one sees that gang phenomena receive varied treatment from foreign powers and their media. Criminal gangs are tolerated so long as they abide their place and do not embarrass or encroach upon the business world of their sponsors. Sometimes, as in Jamaica, they must be curbed when the U.S. master requires a publicity show for its phony war on drugs.

Self defense efforts that arise when poor people and neighbourhoods are obliged to defend themselves against institutional violence are, however, never tolerated. What the CBC and others condemn as gang violence is in many cases the desperate effort of some of the poorest and most oppressed people in the world to protect themselves against the real perpetrators of violence, the imperial overlords of their countries. •