Bargaining in an Era of Wage Restraint

With the Great Financial Crisis apparently over, economic and political elites across the developed countries have cynically ignored who caused the crisis and turned, as their solution, to cutting back social services and attacking the wages and conditions of public sector workers.

So far, they seem to be getting away with it. The crucial question everywhere is ‘where is the labour movement?’ It will not be enough to complain about unfairness or argue that such a strategy will not sustain the vulnerable recovery, or to call for militancy without laying the groundwork for a successful counter-response. If the labour movement cannot use this moment to reinvent itself and its relationship to the community, its recent marginalization will accelerate. The Bullet produced below attempts to begin a dialogue on these issues in the concrete context of the fightback against public sector austerity in Ontario. It is a preface to an upcoming forum organized by the Greater Toronto Workers’ Assembly that will provide a space for union and social activists to collectively discuss and strategize over what, concretely, needs to be done. It is a dialogue and process that needs to be occurring across Canada and North America with a sense of urgency and militancy.

Rethinking Strategies for the Public Sector

In March 2010, the McGuinty government announced the ‘Public Sector Restraint to Protect Public Services Act.’ The legislation freezes wages for one million non-union workers for two years. It also has a number of provisions affecting unionized workers, and a strategy to impose a parallel wage freeze.

I’m a unionized public sector worker. How will this affect me?
The government has instructed all of our employers who receive over one million in provincial funding to negotiate collective agreements that do not include “net compensation increases.” This means that the government expects us to freeze our wages, benefits, vacation benefits, extended health and dental benefits and pension contributions.

This is a government that represents the interests of the economic elite.
If the government were serious about protecting public services, it would not have slashed taxes – including corporate taxes and individual tax rebates – in the recently announced budget. When governments cut taxes, they cut back the very source of funding that makes our public health care, education, social services, municipal services, and so on, just that – public.

This is not a government that is concerned with protecting public services.
The recent Ontario provincial budget cut the $200-million Special Diet benefits program (benefits to support the cost of food and supplement inadequate social assistance and Ontario Disability Support Program benefits). The 1% increase to the Disability Support Program and Ontario Works (social assistance) program is below the 2% cost of inflation. The budget provided for less funding per student to Universities, and the story goes on.

How is the “wage freeze” affecting our unions at the bargaining table?
So far, our unions have told us that the wage freeze won’t apply to workers who belong to a union. But at many of the bargaining tables since the budget announcement, our employers have been insisting – and will undoubtedly continue to insist – that there is no money to fund wages, benefits and pensions.

We can fight back.
We do not have to agree to freeze our wages and benefits. We need to build a strong movement. When the government attacks public sector workers and public services, we are all under attack – people who work in the public sector and the working class majority who rely on public services in so many aspects of our lives.

The government is using the economic crisis to discipline workers.
This means that the government is using the very real economic problems facing Ontario to slash wages, benefits and other gains that we have made over the years and to shrink public services. This is all part of the neoliberal agenda to sell off public services to the private sector and serve the market instead of the people.

McGuinty’s strategy is to keep us divided and fragmented.
Instead of legislating a wage freeze across the board for all workers, a move that would surely meet resistance, the government has cut transfer funding to compensation increases, forcing us to fight out the battle one by one with our provincially funded employers. When we are split apart and fragmented in our workplaces, unions and communities, we are weak and not able to lead a strong resistance. When we join together, across workplaces, unions and communities, we are stronger.

Union jobs raise the standards for all workers.
Given that the wage-freeze legislation applies only to the non-unionized, now is the time to extend unionization to all workers, not back down and run for cover.

The economic crisis should not be solved on the backs of workers, poor people and welfare recipients.
There is no doubt that we are in the midst of an economic crisis and that the government is running a deficit. But let’s think back to how this crisis started in the first place and how employers and governments have used the crisis to threaten workers.

The crisis is being used to put downward pressure on public sector workers and roll back wages and benefits.
In the auto sector, employers told us our wages and benefits weren’t allowing them to be competitive on the global market. If the auto makers couldn’t be competitive, they told us, our jobs would be at risk. We accepted concessions, but many of us still got laid off. Others are working the same job under poorer working conditions. Now the same logic is being applied to the public sector.

Public sector workers should be joining together in solidarity with other workers.
Private sector workers are facing layoffs; low-income and nonunionized workers, public service recipients and people are trying to make ends meet with inadequate wages and social assistance benefits. We all need good jobs and public services.

What are we going to do to build a collective fight-back?
In 1995, when the Harris government attacked workers, unions and welfare recipients, Ontario unions called 11 ‘Days of Action’ – 11 days of political strikes against the Ontario government.

Now is not the time to retreat or retrench in our separate unions. We must build a community-labour coalition that defends the working class as a whole, including public sector workers, private sector workers, unemployed workers and people on social assistance. We must unite to defend public services under attack. 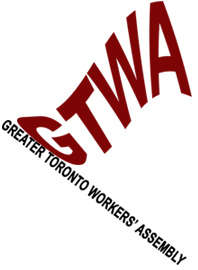 It is time for asking challenging questions about organizing.
Can we organize a series of coordinated actions in our workplaces in solidarity with the people who need public sector services? How should we respond to McGuinty’s legislation in our approach to the bargaining table?

Who we are.
Last year, over 200 trade unionists, anti-poverty, social justice and community activists came together to form a new political organization. The Toronto Workers’ Assembly is dedicated to building a coordinated, effective movement to oppose neoliberalism and to work for social and economic justice in our communities. •

To attain a PDF-flyer of “Bargaining in an Era of Wage Restraint: Rethinking Strategies for the Public Sector” click here.

Video of this forum at Bargaining in an Era of Wage Restraint.