The Massacre and the Cover-Up

Only days after Amnesty International issued a report condemning Western powers for their record of blocking international diplomatic action against Israel, the results of this criminal facilitation were once again on dramatic display. By violently seizing the Free Gaza flotilla in the early hours of May 31, Israel has provided a brazen reminder of what kind of policies are being underwritten by its international allies.

The precise details of the seizure and ensuing massacre remain vague. And for good reason: Israel, whose officials have for weeks been discussing diplomatic options for confronting the flotilla (whose approximately 700 participants are accompanied by some 10,000 tons of cargo), launched a media disinformation blitz parallel to the military operation. In a pattern reminiscent of the Gaza assault of 2008-9, communications from the flotilla were persistently disrupted, its satellite telephones entirely cut off just prior to the pre-dawn assault. Within Israel, the military censor moved almost immediately to prohibit reporting about details of casualties.[1] Having established a near monopoly on access to information, the Israeli government dispatched its spokespeople to tell their story. 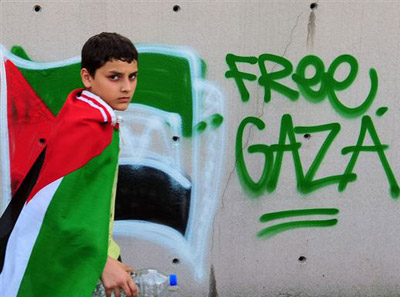 Deploying helicopters, warships and smaller naval vessels against six civilian boats carrying aid supplies, Israel merely sought, so the story goes, to defend itself (in the words of foreign minister Avigdor Lieberman) against “infringement of its sovereignty. Every country has the right to inspect all ships that enter – or intend to enter – its territory.”[2] The boats were to be seized and rerouted to the Israeli port of Ashdod, their “humanitarian” contents (i.e., not the construction goods and other supplies banned by Israeli fiat) transported into Gaza, their passengers sent home or detained pending deportation.

The task of boarding and securing the ships fell to elite naval commandos from Shayetet 13. So conscientious was Israel that some of these elite killers “were equipped with paintball guns,” asserts an unnamed military spokesperson; but they had back-up pistols in case of an emergency.[3] “Unfortunately,” government spokesperson Mark Regev explains, “they were attacked with deadly force by the people on the boats – with iron bars, knives and live fire.”[4] Having been sent to defend their country’s sovereignty, the commandos found themselves under attack by activist passengers, and were forced to gun down a number of them in the process. Thankfully, there were no Israeli casualties.

Without much stronger international pressure than the international community has applied to date, there is every reason to expect Israeli massacres to steadily become more severe, their PR rationales more outlandish.

A Nuclear Power Faces
the Threat of Construction Supplies

In July 2008, the Contractors Association in Gaza – which had just passed into the second year of the present siege – estimated that the 200 tons of cement which Israel was then allowing into Gaza per day without rocket fire would need to be increased to 4,000 tons a day for the construction sector to recover. (The sector also required such restricted materials as steel rods, whose absence spelled disaster for Haiti during the earthquake of January 2010.) Instead, the truce over the next several months was accompanied by a tightened siege, culminating in the fierce air, naval and ground assault which opened the new year (“Operation Cast Lead”). Even as imports were restricted, Israeli firepower reduced Gaza’s deteriorating infrastructure to ruins. In July 2009, with the Gaza economy in continued decline, the United Nations Development Program (UNDP) began a project to clear the besieged Gaza Strip of 420,000 tons of rubble created by Operation Cast Lead.[5] The UNDP reports that about three-quarters of the damage has yet to be repaired.

The Gaza flotilla did, indeed, seek to circumvent the vile restrictions which Israel has imposed on Gaza by bringing in concrete and other restricted supplies. And for this they were militarily attacked. One statement from the group, whose communications have been severely disrupted, asserts that “Israeli commandos dropped from a helicopter onto the Turkish passenger ship, Mavi Marmara, and began to shoot the moment their feet hit the deck. They fired directly into the crowd of civilians asleep.”[6]

The Israeli assertion that passengers were armed is highly questionable. Flotilla organizers insist that cargo and passengers were thoroughly vetted; one organizer told the Agence France Presse: “There is not even a razor, knife or jackknife on board.”[7] The boats which Israel targeted most violently departed from Turkey, with which Israel has had extensive military ties for more than a decade. Turkish customs officials corroborate organizers’ claims. The customs head for the port city of Antalya maintains that searches were thorough, activists were x-rayed before boarding, and “[a]llegations that there were weapons aboard the Turkish ship are baseless.”[8]

For their part, Israeli spokespeople are marketing a range of stories, alleging uncovered weapons caches (e.g., “with switchblades, slingshots, metal balls and metal bats”[9]) and ties between flotilla organizers and al-Qaeda (see most any statement by deputy foreign minister Danny Ayalon over the past few days). This reflects not only cynicism on the part of Israeli state officials, but also an arrogance nurtured by international backing: they expect to get away with it, and before long, probably with much worse.

Available information indicates that the flotilla planned to advance to Gaza in two stages. First, it would travel toward Gaza but stop in international waters some 30 nautical miles from the Gaza coast. It would then wait for an opportune time (during the light of day) to travel into Gaza territorial waters and to the coast. Israel, amassing warships along the coast  in preparation, did not wait for the second stage but instead raided the boats before sunrise. “This happened in waters outside of Israeli territory,” Israeli military spokesperson Avital Leibovich acknowledged, “but we have the right to defend ourselves.”[10]

The situation is both enraging and absurd. This is, after all, the same Israel whose advocates assert, ad nauseam, that the 2005 “disengagement” from Gaza marked the end of its occupation.

For Israel to violently assault vessels in international waters is, indeed, piracy; however, Israel’s claim over Gaza territorial waters is similarly illegitimate. Nonetheless, these are waters that Israel seems intent on annexing de facto as closed military zones. Gazans, to be sure, have no access to them. From 1994 to 2000, the Gaza-Jericho Accord allowed (albeit within a framework of overall Israeli military control) Palestinian fishing up to 20 nautical miles from shore. This has since been reduced, first to 6 nautical miles, and then to 3, all enforced by live ammunition fire from the Israeli navy. One can only speculate as to how the discovery by British Gas Group of natural gas deposits 10-15 nautical miles off shore has affected Israeli decisions.[11] Israel, obviously, continues to claim broad jurisdiction.

For now, Israel is managing these contradictions to advantageous effect. On the one hand, it maintains the coveted “freedom of action” for its military forces and, where sought, access to resources; on the other, it is successfully dodging its obligations under international humanitarian law by refusing to accept responsibility for the Palestinian population under its control. Amazingly, we are now in the midst of an Israeli PR campaign to pass off the trickle of aid the occupation authorities allow into Gaza (paid for by Palestinians, international agencies or donor states) as evidence of Israeli generosity. And all this without jeopardizing close Israeli bilateral ties with a range of wealthy Western allies.

The arrogance of Israeli officials is a function of the apparent international willingness to facilitate these crimes. These latest killings show that Israel is willing to press the limits. Israeli officials have shown themselves willing to violently shoot up civilian vessels, flying the flags of military allies (Turkey and apparently Greece), traveling in international waters. Moreover, this was done on the eve of a sensitive visit to Washington by their head of government.

Mild diplomatic rebukes will not sway them. Unless serious costs are imposed for such crimes, much worse is yet to come. •

7.
“Factfile on the flotilla of ships Israeli forces raided,” Agence France Presse, May 31 2010.

Dan Freeman-Maloy is an activist and writer based in Montreal. He blogs at notesonhypocrisy.com