In and Out of Crisis

With the recent publication of their new book on the financial crisis and the crisis of the North American Left, In and Out Of Crisis (PM Press, 2010), ZNet took the opportunity to interview Greg Albo, Sam Gindin and Leo Panitch on some of the themes of the book and the struggles that now confront the Left. The authors all teach political economy at York University, and edit the Socialist Register. The Bullet reproduces that interview here.

Can you tell ZNet, please, what In and Out of Crisis: The Global Financial Meltdown and Left Alternatives is about and what is it trying to communicate? 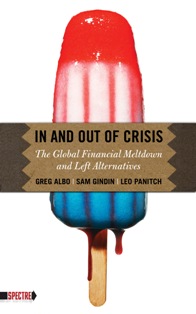 This book departs from the common tendency on the left no less than on the right to judge economic and political developments through the prism of ‘states versus markets,’ with each crisis marking an oscillation between one pole or the other. There are many conceptual and political traps in such a binary opposition. On the one hand, it suggests that markets can be potentially self-sufficient and that somehow states, as the underwriters of a vast administrative and physical infrastructure necessary for markets to exist at all and as guarantors of private property, can be marginalized.

On the other, it is proposed that the state can compensate for market failures and act as a neutral policy mechanism to offset private interests by governing in the public interest. This misses the point that we are talking about capitalist markets and capitalist states, and the two are deeply inter-twined in the class and power structures of global capitalism. This book especially shows how far this is so in the case of the American state in relation to financial markets.

We hope to dispel some debilitating misconceptions on the left concerning the nature of capitalist crises as well as the relationship between the state, finance and production in the neoliberal era. The book traces the historical process through which, over a century punctuated by previous crises, the American state and finance developed in tandem, and came to play a new kind of imperial role at the center of global capitalism. And in light of the contradictions that were produced in this process, it also traces the development of the crisis that began in 2007 and explains the active role of the American state, both under Bush and Obama, in containing the crisis in ways that reproduced the structures of class inequality and power domestically and internationally.

In addition to this, we analyze the relationship between industry and finance, especially in terms of how it played itself out in the crisis in the auto sector. This means the full class dimensions of the crisis are brought to the fore, and leads to a sober examination of the impasse of the North American labour movement and how seriously this affects the North American left.

Can you tell ZNet something about writing the book?

The interpretation offered in this book is located within the analytical framework of radical political economy, and in particular its lineages in Marx and state theory. It is partly a product of collective efforts, not least the intensive discussions we have had with our graduate students in the political science department at York University. Many of the chapters are based on pieces each of us wrote during the course of the crisis that appeared on The Bullet of the Socialist Project. The three of us found it very stimulating to work together in laying out our overall argument for this book, and clarifying our conceptualization of the neoliberal period of capitalism, our reading of the crisis, and the vision and politics behind the strategic alternatives we want to pose for the North American left.

What are your hopes for the book? What do you hope it will contribute or achieve politically?

The book was conceived at a historic moment when the ruling elites – from the financiers through the Detroit auto executives to liberal politicians – had lost credibility. Yet labour and the left remained on the defensive. Being realistic today means daring to put forward something really new on the political agenda. Rather than perpetuating dependence on markets, competition, private corporations and the values and pressures they represent, the left needs to be organizing around an independent vision.

Our book argues that the alternatives needed are not ‘technical’ solutions to capitalist economic crises, but political ones that challenge property rights in the name of democratic and social rights. This involves a transformation in left culture, one which can’t really begin, let alone succeed if it isn’t part of the widest degree of discussion and debate about economic and political possibilities, involving mobilization within and across the gender, racial and ethnic diversities of working class communities, and developing strategies for identifying allies and building new popular, union and community capacities. We see the book as a contribution to this.

Even as they tried to stimulate the economy, states were impelled to lay off public sector workers or cut back their pay, and to demand that bailed-out companies do the same. And while blaming volatile derivatives market for causing the crisis, states promoted derivatives trading in carbon credits as a solution to the climate crisis. In the context of such readily visible irrationalities, a strong case can be made that – to really save jobs and the communities that depend on them in a way that converts production to ecologically sustainable priorities during the course of this crisis – we need to break with the logic of capitalist markets rather than use state institutions to reinforce them.

However deep the crisis, however confused and demoralized are capitalist elites both inside and outside the state, and however widespread the popular outrage against them, making the case for such a broader democratization will certainly require hard and committed work by a great many activists. They will need to put their minds not only to demanding immediate reforms but how to finally make a genuine democracy that transcends the capitalist economy and state. We want to clarify that this is on the agenda as a essential precondition for building out of this crisis the new movements and parties that are needed to make such a genuine democracy a real possibility. •

The book is published by PM Press/Spectre. Also available, inandoutofcrisis – blog. A preview is available on Google Books.