Pro-sports, Anti-Olympics: Reclaiming the games, From the Games

One of the first photographs I ever posed for was of my dad and me skating on our frozen backyard in Winnipeg. I wasn’t even a year old but I was already engaged in an activity that would frame my moral and ideological compass for the better part of three decades (and counting.) Hockey has given me community – even as it has been used to legitimate politics that destroy communities. Hockey taught me values like teamwork and commitment – even as it reinforced values that perpetuate sexism, heterosexism and racism. And in perhaps the greatest irony of them all, hockey saved my life – even as it has been a vehicle for the propaganda that justifies our savage occupation of Afghanistan that continues to take so many lives. 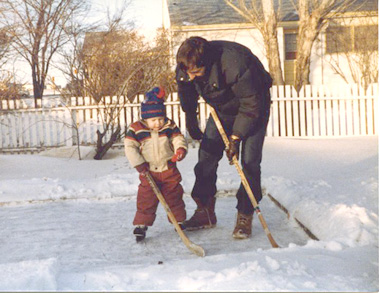 And so it is with this year’s great corporate sporting spectacle, Vancouver 2010. Each day, I read a new article describing the myriad destructions the Olympic Games are wreaking upon people in British Columbia and beyond. Roger Annis’ excellent piece in The Bullet provides just a sketch of that destruction – ranging from the militarization of Vancouver and the ‘cleansing’ of the city’s impoverished to the innumerable offenses committed against the hundreds of Indigenous nations who have never ceded the territory upon which the Games are being held. Our ‘green’ Games are the most environmentally destructive on record.1 As public money is poured into the seemingly bottomless pit of over-budget Olympic expenses, British Columbia’s government has had to acknowledge that they are slashing-and-burning the services that build and protect the communities that Olympics claim to celebrate.2 Speaking of celebration, the lavish opening ceremonies on Friday featured an alphabetically-ironic moment as flag-draped athletes representing Iran and Israel, two detestable regimes that detest one another and carry out unspeakable violence on people living in their territory often in the name of that conflict, paraded out one-after-the-other. It is hard to imagine Palestinians in Gaza or student protestors in Tehran being comforted by Olympic organizers’ claims that the Games represent the spirit of ‘international cooperation.’

In the meantime, of course, Canadians are being hammered over the head with pressure to conform to our own nationalist ‘spirit’ in nearly every conceivable medium. A friend of mine satirized CTV’s set of over-the-top TV ads by suggesting that, if we don’t cheer loudly enough for our athletes, a giant robot Donald Sutherland would descend and tell us ‘it’s time to believe or die.’ Indeed, Sutherland’s melodramatic performances are indicative of the attitude that the new Harper-era Canada is projecting; no longer a polite assistant to power, we now intend to show the world that we are, indeed, powerful in our own right. Our (pro)rogue government thumbs its nose at global consensus on climate change and leads the charge in Afghanistan while we thump our chests to Molson ads that boast of our ‘awesomeness’ as we prove to the world that we are just as capable of jingoistic patriotic arrogance as our neighbours to the south. And in one of our most hubristic turns, we are using the Olympics to promote the image of a just-occupation in Afghanistan, exactly 30 years after we boycotted the Moscow Olympics to protest the injustice of the Soviet occupation of that same country.3

But what does any of this have to do with chasing a black rubber disc around a frozen pond? Does my compulsion to dig the puck out of the corner and throw a perfect pass into the slot mean that I am endorsing Canadian colonialism? If I am serious about resisting the BC government’s criminalization of poverty, must I also give up my dream of dropping down to block a shot from the point in a crucial penalty-kill in the third period? I would like to believe that we do not need to abandon the games that we love in order to critique the way those same games are exploited for the purposes of the Games. I’m not prepared to blame the activities that I love for the fact that they are being used to promote a corporate, militaristic and colonial agenda.

Indeed, this distinction between the games and the Games is, to me, of crucial importance. Sport is one of the few languages that I still share with most of my old friends and family. Many times, I’ve used an awkwardly-applied sports analogy to try to demonstrate the absurdity of capitalist imperatives, the wrongheadedness of the ‘war on terror’ or, in one instance, the injustice of strike-breaking. (“Dad, if you insisted that your team needed safer helmets, wouldn’t you be upset if the league simply replaced you with a new coach who would use the old helmets? What if one of your players got hurt because of it? That’s exactly like the Employer hiring scabs!”) Certainly not an airtight analogy; but it provides an opening to a broader political conversation by starting from something that we can agree upon.

Sports can play a positive role in our communities in promoting healthy and active lifestyles, in celebration of leisure time, and in providing a venue for building meaningful social connections; ironically, the Olympics are actually undermining that role. As some $6-billion (at least) is thrown at the Olympics,4 sports and community centers are being shut down in cities across Canada. The outdoor rinks where I grew up are disappearing, replaced by a handful of massive arenas that are always overbooked and inaccessible. Sporting venues are increasingly priced out of the range of poor and working poor families. Not surprisingly, research has consistently shown that Olympic athletes are overwhelmingly drawn from privileged sections of society.5 The message here seems to be that only the rich can participate in sport; the poor must content themselves with buying team merchandise and watching on TV.

Of course, there is still much that sports can offer even to the observer. It doesn’t take long to realize that a hockey game cannot be won without a team of individuals cooperating and taking on different but crucial roles – a lesson that I have often remembered and come back to when organizing political demonstrations. Athletes often represent stories of resilience and struggle against a variety of obstacles; the protestors in Vancouver are showing that same sort of resilience in standing strong against the largest concentration of Canadian military forces in the world at this moment. Sport is, at its essence, an activity taken for its own sake – for fun. In a society that often appears to have internalized the logic of capitalist modernity where every activity must have some purpose (which is almost inevitably connected to someone’s ability to make profit) it does us all some good to be reminded of pursuits that lie primarily outside those parameters.

Protesting the Olympics in Support of Sport

Progressive political organizers often take as a starting point the notion that – as the anti-globalization movement claimed – ‘another world is possible.’ I see no reason that sports can’t be part of that new world. To be sure, many of the structures and assumptions built around sporting cultures need to be roundly interrogated. Like so many institutions in contemporary liberal capitalism – the family, for instance – sports have been attached to a variety of problematic value systems. Hockey culture in Canada is profoundly white; Tim Hortons’ apple-pie imagery of rural pond hockey is almost entirely devoid of racialized people and the NHL consistently treats Indigenous players as if they are naturally inclined to show poor sportsmanship, giving them harsher penalties for on-ice infractions and creating mythologies around their violent and unpredictable nature. And it only requires one viewing of the appalling weekly installments of Don Cherry’s sanctioned-hate segments on CBC to recognize that misogyny, homophobia and xenophobia are woven into the fabric of ‘Canada’s game.’ But is this reflective of something wrong with hockey or something wrong with Canada?

Just as most progressive observers would support a re-formulating of the family rather than its destruction, sports ought to be treated as a sphere of contestation; we can have hockey without the war and we can have a competition between the world’s fastest skiers and most skilled curlers without the Olympics. If, in protesting the Games, we forget about the games upon which the spectacle is built, we risk alienating ourselves entirely from people who might otherwise be receptive to the critiques we are bringing. What is worse, we risk alienating ourselves from something that can be important in our own lives. I made my first friendships and faced some of my earliest physical and emotional tests at the rink. I had my most formative brush with capitalism when my beloved Winnipeg Jets were sold to a businessman from Phoenix. In the darkest moments of a struggle with depression I was offered a free ticket to see the Toronto Maple Leafs lose – a pleasure that I cherished with all my prairie heart and that helped shake me through my own personal struggles.

I will continue to support and participate in the anti-Olympic protests. I will continue to denounce the Games as a corporate spectacle paid for by the sweat and blood of workers and Indigenous people. I will continue to reject the jingoism and war-propaganda that pepper the presentation of the Games, and I will insist upon a world where I can watch Sidney Crosby go head-to-head with Alex Ovechkin without simultaneously legitimating the destruction of communities like my own. In Emma Goldman’s famous appeal to dancing-in-revolution, she wrote, “I did not believe that a Cause which stood for a beautiful ideal, for anarchism, for release and freedom from conventions and prejudice, should demand the denial of life and joy.”6 Anti-Olympic protest is not about ‘the denial of life and joy,’ it is precisely the opposite. It is about rejecting a structure that limits the accessibility of life and joy for all. •

Tyler Shipley is professor of Culture, Society, and Commerce at the Humber Institute of Technology and Advanced Learning and he has written for academic journals and local and mainstream media across North America and Europe. His most recent books are Ottawa and Empire: Canada and the Military Coup in Honduras, and Canada In The World.