Our Role in Haiti’s Plight

Any large city in the world would have suffered extensive damage from an earthquake on the scale of the one that ravaged Haiti’s capital city on Tuesday afternoon, but it’s no accident that so much of Port-au-Prince now looks like a war zone. Much of the devastation wreaked by this latest and most calamitous disaster to befall Haiti is best understood as another thoroughly manmade outcome of a long and ugly historical sequence.

The country has faced more than its fair share of catastrophes. Hundreds died in Port-au-Prince in an earthquake back in June 1770, and the huge earthquake of 7 May 1842 may have killed 10,000 in the northern city of Cap ­Haitien alone. Hurricanes batter the island on a regular basis, most recently in 2004 and again in 2008; the storms of September 2008 flooded the town of Gonaïves and swept away much of its flimsy infrastructure, killing more than a thousand people and destroying many thousands of homes. The full scale of the destruction resulting from this earthquake may not become clear for several weeks. Even minimal repairs will take years to complete, and the long-term impact is incalculable. 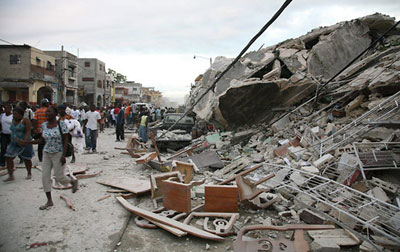 What is already all too clear, however, is the fact that this impact will be the result of an even longer-term history of deliberate impoverishment and disempowerment. Haiti is routinely described as the “poorest country in the western hemisphere.” This poverty is the direct legacy of perhaps the most brutal system of colonial exploitation in world history, compounded by decades of systematic postcolonial oppression.

The noble “international community” which is currently scrambling to send its “humanitarian aid” to Haiti is largely responsible for the extent of the suffering it now aims to reduce. Ever since the U.S. invaded and occupied the country in 1915, every serious political attempt to allow Haiti’s people to move (in former president Jean-Bertrand Aristide’s phrase) “from absolute misery to a dignified poverty” has been violently and deliberately blocked by the U.S. government and some of its allies.

Aristide’s own government (elected by some 75% of the electorate) was the latest victim of such interference, when it was overthrown by an internationally sponsored coup in 2004 that killed several thousand people and left much of the population smouldering in resentment. The UN has subsequently maintained a large and enormously expensive stabilization and pacification force in the country.

Haiti is now a country where, according to the best available study, around 75% of the population “lives on less than $2 per day, and 56% – four and a half million people – live on less than $1 per day.” Decades of neoliberal “adjustment” and neo-imperial intervention have robbed its government of any significant capacity to invest in its people or to regulate its economy. Punitive international trade and financial arrangements ensure that such destitution and impotence will remain a structural fact of Haitian life for the foreseeable future.

It is this poverty and powerlessness that account for the full scale of the horror in Port-au-Prince today. Since the late 1970s, relentless neoliberal assault on Haiti’s agrarian economy has forced tens of thousands of small farmers into overcrowded urban slums. Although there are no reliable statistics, hundreds of thousands of Port-au-Prince residents now live in desperately sub-standard informal housing, often perched precariously on the side of deforested ravines. The selection of the people living in such places and conditions is itself no more “natural” or accidental than the extent of the injuries they have suffered.

As Brian Concannon, the director of the Institute for Justice and Democracy in Haiti, points out:

“Those people got there because they or their parents were intentionally pushed out of the countryside by aid and trade policies specifically designed to create a large captive and therefore exploitable labour force in the cities; by definition they are people who would not be able to afford to build earthquake resistant houses.”

The international community has been effectively ruling Haiti since the 2004 coup. The same countries scrambling to send emergency help to Haiti now, however, have during the last five years consistently voted against any extension of the UN mission’s mandate beyond its immediate military purpose. Proposals to divert some of this “investment” toward poverty reduction or agrarian development have been blocked, in keeping with the long-term patterns that continue to shape the ­distribution of international “aid.”

The same storms that killed so many in 2008 hit Cuba just as hard but killed only four people. Cuba has escaped the worst effects of neoliberal “reform,” and its government retains a capacity to defend its people from disaster. If we are serious about helping Haiti through this latest crisis then we should take this comparative point on board. Along with sending emergency relief, we should ask what we can do to facilitate the self-empowerment of Haiti’s people and public institutions. If we are serious about helping we need to stop ­trying to control Haiti’s government, to pacify its citizens, and to exploit its economy. And then we need to start paying for at least some of the damage we’ve already done. •

Urgent Appeal for the People of Haiti

From the Canada Haiti Action Network

January 14, 2010 — Two days ago at 5 pm local time, a powerful magnitude-7 earthquake struck in Haiti. It was centred near the capital city Port-au-Prince and has caused massive destruction.
The Canada Haiti Action Network urges Canadians and others around the world to contribute generously to emergency relief.

You can contribute to the Haitian Red Cross through its international partners in the International Red Cross. Contributions are tax deductible. The Canadian Red Cross is at:
www.redcross.ca. We also encourage contributions to the following organizations. Remember that you must provide a name and return mailing address in order to receive a tax-deductible receipt:

Peter Hallward is a Canadian-born professor of philosophy at Middlesex University in London, UK. His Damming the Flood: Haiti, Aristide and the Politics of Containment was published in 2008 by Verso. That year, he made a four-city speaking tour across Canada to coincide with the book's publishing, organized by the Canada Haiti Action Network.