It’s not every day that the Ottawa Citizen mentions Socialist Voice, but on November 30 the pillar of the Canwest media empire broke its silence – and misquoted us as part of a smear attack on all progressive activists in Canada. The page three article by Ian MacLeod, headlined “Activists, extremists primed for 2010,” aims to promote fear of possible protests against Israeli apartheid, the Winter Olympics, and the planned G8/G20 meetings in Ontario. 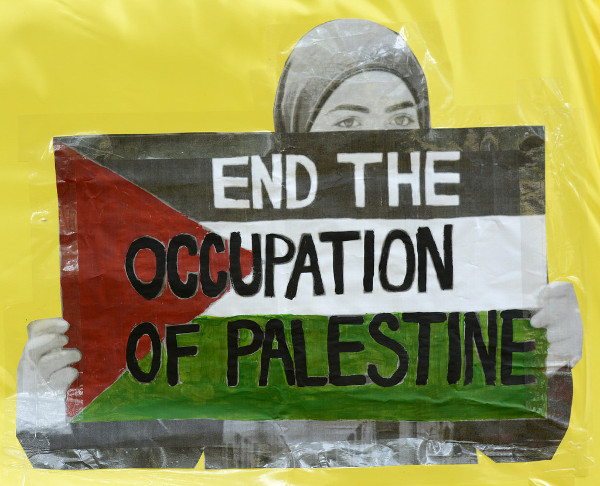 Most of the article is based on comments by one Tom Quiggin, described as an “Ottawa security intelligence specialist who has worked with police to analyze the extreme end of the activist movement.” Quiggin says that “Canadian anti-capitalist, anti-globalization, anti-war and anti-free trade groups are now in common cause with pro-Hezbollah and pro-Palestinian groups.” This sinister alliance, MacLeod and Quiggin predict, will take to the streets in Canada in 2010.

The only evidence offered of radical convergence with organizations Ottawa has branded as “terrorist” is a supposed quotation from Socialist Voice.

“Among delegates from other countries, the most authoritative voices were those of Hezbollah and Hamas,” Socialist Voice newsletter editor John Riddell wrote later. “Socialists in Canada need to strengthen their ties with these vanguard fighters in the Middle East.”

The words in quotes did in fact appear in a Socialist Voice article in April 2007, “Cairo Conference Calls for World Resistance Against Imperialism,” but the first sentence appeared eight paragraphs after the second, and in a different context.

Here is the sentence about “strengthened ties,” in its original context:

“The success of the Cairo conference is an encouraging sign that a new pole of international leadership in anti-imperialist struggle may be emerging in the Middle East – analogous to what we see arising in Latin America under the impulse of Venezuela and Cuba. Socialists in Canada need to strengthen their ties of solidarity with these vanguard fighters in the Middle East.”

By tacking part of that paragraph onto an earlier sentence on a different subject, the Ottawa Citizen is blatantly misrepresenting what we wrote. The reference was to ties with the Cairo conference, not Hamas and Hezbollah.

As the article explained, the Cairo conference brought together a broad range of Middle Eastern anti-imperialist currents: Islamic, secular nationalist, and socialist.

Among the 2,000 participants in this open conference were representatives of Hezbollah, one of Lebanon’s strongest political parties, and of Hamas, the democratically elected government of occupied Palestine. These organizations’ resistance to Israel’s murderous attacks has earned them official designation as “terrorist” by the Canadian government.

Hamas is listed by Public Safety Canada as “terrorist” because it “uses political and violent means to pursue the goal of establishing an Islamic Palestinian state in Israel.” On the face of it, this description does not correspond to the conduct of Hamas as the democratically elected government in the Gaza Strip, seeking to defend its people against the overwhelming violence of Israel’s siege and military assaults.

Nor is it clear why the pursuit of a Palestinian state – a declared goal of the Canadian government – is a threat to the Canadian people. Branding Hamas and Hezbollah “terrorist,” however, obstructs objective consideration of these issues.

The “terrorist” ban makes it illegal to knowingly contribute, directly or indirectly, to enhancing the ability of a listed organization to carry out terrorist activity. This provision is applied so broadly as to prevent Hamas from presenting its views in Canada, or for anyone to speak on its behalf. The chilling effect is evident in the continuing fuss over the 2007 Cairo conference.

That conference was condemned in the media because someone from Hamas was present. Canadians were threatened with “police attention” for attending a conference where a member of Hamas was present, and in at least one case, a Canadian resident was hauled before an immigration officer and challenged for his acquaintance with a Canadian who had attended the Cairo conference also attended by a Hamas member.

Such a pattern of intimidation and guilt by association is a genuine threat to freedom of speech in this country.

Now, by promoting the false charge that Canada’s protest groups are allied with Hamas and Hezbollah, the police and their media allies at CanWest are trying to prepare the ground for “anti-terrorist” repression against protest actions in 2010.

Ottawa gave us a taste of its agenda for 2010 on November 25, when U.S. radical reporter Amy Goodman, host of the popular Democracy Now program, was detained by Canada Border Service agents for more than 90 minutes at the Douglas border crossing in British Columbia, while on her way to a scheduled meeting at a Vancouver public library. The agents grilled her as to what she planned to say in Canada, on suspicion that she would make critical remarks regarding the coming Winter Olympics. She was ultimately permitted to enter the country, but only on condition that she leave within 48 hours.

Clearly, the right of free speech and assembly will be under attack in British Columbia in February.

We can expect similar efforts to undermine Israeli Apartheid Week, March 1-7, and to obstruct the expression of dissident views during the planned G8 and G20 governmental summits in Ontario in June.

United efforts are needed to ensure that these actions take place without police disruption. All supporters of democratic rights must respond firmly to every attack on free speech, including the Ottawa Citizen smears. •