The Unite union in New Zealand is the country’s newest, and among its most dynamic, trade unions. It is at the forefront of a revitalization of a section of the labour movement in New Zealand that has resulted in thousands of young and marginalized workers gaining union representation for the first time and winning significant wage raises, including to the national minimum wage.

On April 6, 2009, I spent a day visiting Unite’s offices in Auckland, New Zealand, in order to learn more about its successes.

My day at Unite started with an invitation to observe the weekly Monday morning staff meeting. Fourteen staff in Auckland were joined via teleconference to three staff who campaign in three other cities – Wellington (New Zealand’s capital), Christchurch, and Hamilton.

The meeting began with a review of new-member recruitment. The previous week was a big one for the union, netting 250 new members. Unite was founded in 2004. In the past year and a half, it has grown by 3,000 to reach 8,000 members. The largest components are fast food, followed by call centers, hotels and a casino, and postal workers.

Many of its members are from the nationally oppressed Maori indigenous and Pacific island populations.

Unite uses a variety of tactics to win members. Staff and volunteers visit worksites and convince workers to sign membership cards. New Zealand law permits access to worksites by union organizers, though the latter still encounter threats and intimidation by employers, or worse. For example, on Friday, April 9, the British-owned Synovate company locked out 30 workers during first contract talks.

The next day, union members and supporters blockaded the entrance to the center. Unite announced flying pickets squads for the following week to target major companies in Auckland and Wellington that are clients of Synovate. A new collective agreement with the company was soon won.

Unite has led imaginative and militant strikes, including the world’s first strikes at the Starbucks coffee chain, in 2005, and short strikes at MacDonald’s outlets in 2006 and again in 2008.

From the beginning, Unite has fought for a $12 per hour national minimum wage (one New Zealand dollar equals 57¢ U.S.) and an end to hated, slave-labour, youth wage rates. It gained support from other unions for these demands, and last year they won the minimum-wage demand. It has since been raised to $12.50.

Wage rates for 16- and 17-year-olds are still 80 percent of the adult rate. But as of 2009, these rates have been abolished at all the employers organized by Unite, including McDonalds, KFC, Pizza Hut, Burger King, and the major movie theatre chains.

The union’s fighting reputation recently earned it the affiliation of 500 members of the national postal workers union branch that covers the top half of the North Island (New Zealand is divided into two large islands of near equal size; about two-thirds of the population of 4.2-million live on the North Island).

Several other unions have emulated Unite’s tactics and have transformed themselves into more activist and representative unions as a result. The 22,000-member National Distribution Union (NDU) recently scored a breakthrough at the country’s retail giant The Warehouse (New Zealand’s answer to Wal-Mart), signing up 2,000 new members.

The proportion of union membership in New Zealand is 22 percent, down from a high of 69 percent in 1980.

Unite’s national office in Auckland is spacious and bright. It’s strictly functional – no expensive furniture here. Staff are paid salaries that approximate those of the members it serves. No one earns higher than NZ$20 per hour. While that’s tough to maintain when other unions can pay considerably higher, Unite National Secretary Mike Treen and the rest of the union leadership believe there are important matters of principle involved.

“Unite is not just a trade union that negotiates collective agreements,” Treen says. “It’s also a social project to better the lot of the entire working class.

“Most of our members live in very difficult economic circumstances, and if our staff lead lives of significantly greater comfort, the broader vision of the union will weaken.

“We want to encourage a turnover that brings in staff members who are young, female, or from oppressed nationalities. An entrenched staff that gets comfortable with big salaries will, over time, get in the way of this kind of evolution of the union and its staff.”

The weekly staff meeting reviewed several social projects that Unite is promoting for its members. One is providing basic information on a new national pension fund called “Kiwisaver.” For every dollar of savings put into the plan by a New Zealand worker, up to a maximum of $20 per week, an employer and the national government will each contribute one additional dollar. Workers have a choice of providers to direct their savings. Unite earns a small rebate when its member chooses the union’s recommended provider (a fund that claims an ethical investment policy). 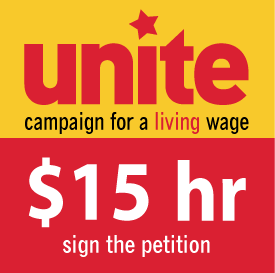 Unite also operates an education institution in downtown Auckland that accesses government education funding and offers courses in computer literacy, Maori language, and small business management, among others. Several thousand Unite members have attended the school since its inception in 2007.

Unite and the NDU are preparing a campaign to win a $15 an hour minimum wage, itself a step toward an eventual goal of a minimum wage set at two-thirds of the average wage. Unite will soon launch a campaign for a national referendum vote on the matter. It needs 300,000 signatures to get the proposal on a national ballot, and Mike Treen has every confidence that it will succeed. He explains,

“The goal of the campaign is not only to win the $15 minimum wage. It’s also to expand the base of support for trade unionism and progressive social policies.

“This campaign will place the world economic collapse at the center of New Zealand politics because it rejects the notion that workers must pay the price of that collapse. We can expect that employers and the government will fight us very vigorously.

“In the 1990s we paid a heavy price in New Zealand for capitalism’s failures. Unemployment hit 12 percent and real wages declined by 25 percent. Wages have never recovered. We think that workers will respond very positively to a campaign seeking to retake some of that lost ground.

“We will use the 300,000-signature campaign to gather e-mail addresses permitting us to keep in touch with signatories. They will receive information bulletins that the union will issue on the $15 campaign and other issues of broad social interest to working people. And of course, we hope and expect that workers will contact us to join our union or another of their choice.”

The evening after the Monday staff meeting, Unite joined with several other trade union organizations to host a widely publicized public forum to defend the rights of temporary, migrant workers in New Zealand. There are several hundred thousand workers at any given time in the country who work on temporary permits in such industries as agriculture and retail services.

Unite is concerned that with the rise of unemployment, temporary workers’ rights are coming under attack by employers and the national government. It supports equal rights for all workers and is working with such organizations of oppressed workers as Migrante Aotearoa (a trade union-based, immigrant workers organization) and Runanga, the council of Maori trade union members within the national trade union council, the CTU. Both of these organizations were co-sponsors of the public forum. Seventy-five people attended.

Unite is also an outspoken participant in New Zealand’s antiwar campaigning. Several of its leaders, including Mike Treen and John Minto, are founders and spokespeople for Global Peace and Justice Auckland, the country’s largest antiwar group. •

To contact or learn more about Unite, go to www.unite.org.nz.